In an earlier post on the great civilizational fault-line in Europe, I proposed that one salient marker of the split between Nordo-Balto-Slavic people and Italo-Celto-Germanic people on the other is blonde hair (more prevalent for the Plains People, less for the hilly/mountain people).

One of the main differences emphasized in that post was the strength of religious involvement -- blondes don't seem as into their religion as dark-haired people are. It seems like the blonde parts of Europe have been gradually shifting away from religious engagement since the Lutheran Reformation, with unusually large fractions of those regions being pretty uncommitted nowadays, and not holding things as sacred as they used to. Blondes seem more concretely oriented toward making a living and providing for their nuclear family, devoting less time to broader community involvement in a sacred setting, something that would really bring out the "collective effervescence" in a community.

I'll be looking in finer detail at hair color and religiosity in future posts. For now, let's start with a simpler goal -- how blonde are various religious groups? We should only look at people who come from places where hair color varies enough to have a fair number of blondes. Otherwise we'll be confounding hair color with ethnicity -- dark-haired Italians vs. blonde Swedes, for example. We want to look only at hair color, so I'm restricting the data to white Americans of English and German descent. That will also include all the major religious groupings. (I'm excluding Jews because they're not who I mean by English and German, even if they came here from there.)

The sample is the National Longitudinal Study of Youth (1979), a nationally representative group who were born in from the late '50s through the mid '60s, and who began to be studied in the late '70s, with regular follow-up surveys being done throughout their lives.

At the outset they were asked what religion they were raised in, and a little later they were categorized by hair color. I've merged "light blonde" and "blonde" into a single "blonde" group, and "dark brown" and "black" into a single "dark" group. The extremes are quite small in number, and it's not clear how meaningful the distinction was in the interviewer's mind. They were probed for clarification if they said they were raised Protestant -- e.g., Methodist, Lutheran, etc. The category here labeled "Protestant" is a catch-all for anyone not in the major denominations. I'm assuming most of them are evangelical, charismatic, and so on. "Other" I guess could mean Orthodox, Hindu, Buddhist, or whatever else parents might have been raising their kids as during the '60s and '70s.

Here is the percent of each group that has blonde hair: 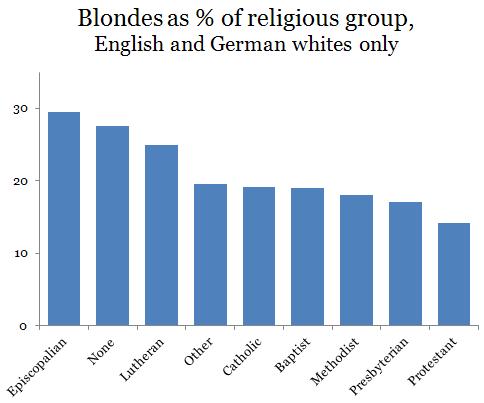 The Episcopalians are more than twice as blonde as the catch-all Protestants. Lutherans are also noticeably blonder than the others. As are those children raised as godless heathens. If blonde birds of a feather flock together, this confirms the hunch that Episcopalians are the closest to atheists among mainstream groups. But it also hints at a similar streak among Lutherans, who most readers probably don't have much of a clear idea about.

We can see that it's not Protestantism per se because the catch-alls are the least blonde, with Methodists and Presbyterians being pretty dark as well. Catholics and Baptists are equally blonde.

Rather, it seems like the more historically high-commitment groups are darker haired, while the less involved and lenient groups are much blonder. Catholicism is already fairly high in commitment; the historically radical groups were even more so. One of Luther's main reforms was to shift focus away from performing acts of penance to atone for your sins, and toward faith alone as the path toward salvation. And the lax nature of Episcopalian doctrine and practice (at least by the late 1970s) is a widespread stereotype.

Is this something about non-dark hair? Nope. The table below shows blondes, darks, and redheads (light browns are the remainder, not shown). Most redheaded is at the top.


Redheads are the least common in godless, Other, and Episcopalian groups, but most common in Methodist, Baptist, and Presbyterian groups. Folks raised Presbyterian are nearly 3 times as redheaded as those raised with no religion. The general trend is for higher-commitment and radical groups to have more gingers. That fits the stereotype of fiery redheads, from Tacitus' description of the Germanic tribes of the ancient world, to the medieval Vikings, to present-day Yosemite Sam. In case we weren't sure before, now we know that red hair cannot be meaningfully grouped with blonde hair  ("light hair") when it comes to social and cultural traits.

Remember that all these people are whites of English or German origin. Dark-haired French and blonde Lithuanians are not mixing up the results by introducing ethnicity as a confound. It does seem like there are two populations being studied, but it's hair color rather than ethnicity or nationality that distinguishes them. When the genetic mutations for blonde hair first appeared, they must have been doing something, and now it looks like a retreat from religious involvement is a key part of that new variety of homo sapiens. That really would have been a novel character trait, given how ubiquitous religion has been across the world throughout human evolution.

In future posts, we'll take a look at other hints from the NLSY that blonde hair color marked the beginning of the slow secularization of the groups that it caught on in.