The great civilizational fault-line in Europe slices right through Germany, carving it into hilly/mountain country in the west and south, and lowland plains in the north and east. People adapted to the Saxon-Prussian half show traits like farmers show elsewhere around the world, while people adapted to the Rhenish-Bavarian half show traits more typical of (agro-)pastoralist folk around the world.

Perhaps the most familiar example to us of Germans who know how to have a rollicking good time is Oktoberfest. That sure doesn't sound like a ritual created by dour, nose-to-the-grindstone martinets. Incurious foreigners might try to spin some baroque explanation for this "counter-intuitive" fact. I don't know why people have such a problem with common sense. Maybe it's not so counter-intuitive, and you're simply missing a big piece of the puzzle.

That's what's going on here -- Oktoberfest comes from one half of Germany, while those other stereotypes come from the other, opposite half. No contradiction to resolve. It would be like a clueless outsider trying to explain how Los Angeles stereotypes ultimately and tortuously derive from American Puritanism -- wrong part of the country.

I got to wondering, given how deep this divide runs in Germany, and given all you hear about Bavarian separatism (if you're tuned in to those kind of things), will the west/south of Germany begin to rally around symbols of their distinctly fun-loving half of the country? Even if they're not exactly near Munich, and their local culture might not include those symbols? It would be like Americans out west rallying around L.A. cultural symbols (back when it was worth rallying around), and those back east rallying around New York symbols. Or if you live in Maine, should you root for the Red Sox?

With clothing and appearances, the personal is often political. Around the world, people dress a certain way to show their membership in a certain ethnic group. The clothing items most identified with Oktoberfest are the lederhosen for men and the dirndl for women.

I used Google Trends to see where in Germany people search the web for these items. Below are maps showing the popularity of searches for "lederhosen" and "dirndl" (normalized for overall number of web searches), from January 2010 to August 2013. I chose more recent dates to allow for a trend to have caught on. German national pride seems to have really taken off after hosting and taking 3rd place in the 2006 World Cup, for instance. I looked at the level of cities to get fine-grained resolution. 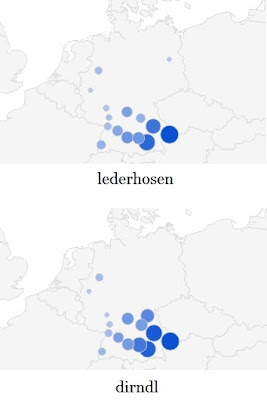 No surprise that the epicenter of interest for Oktoberfest-related items is Munich, but it fans out into the rest of Bavaria and even into the Rhineland. The northern and eastern Germans couldn't care less about such alien clothing. (That tiny blip for "lederhosen" in Berlin is probably a weird fetish thing.)

Is this just showing interest in Oktoberfest in general? Apparently not. Here's how popular searches for "oktoberfest" are across the country: 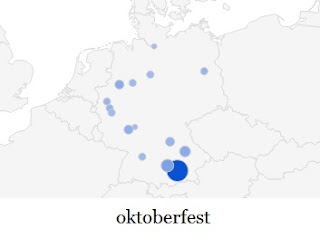 Now we see much less concentration in the south, more in the west, and suddenly some interest up north and east. I take this to mean that northern/eastern Germans are interested in taking a trip down to Oktoberfest as tourists, but no deeper or more enduring connection to the culture down there. Whereas a Bavarian or Rhinelander might want a pair of lederhosen or a dirndl for other occasions throughout the year, or to wear once in awhile in normal situations -- as an expression of cultural pride and belonging. Kind of like how folks out west are into designs and patterns that come from the Southwest Indian tribes, or how folks back in New York, Boston, and D.C. wear black head-to-toe in honor of their severe, Puritan heritage.

Munich is seeing heavy immigration from across Germany, as people flock there in search of jobs. Evidently, though, they don't have any interest in looking the part before they leave their northern/eastern homeland. Akin to a Bostonian studying out in California who would rather die than buy (let alone wear) a Hawaiian shirt during warm weather.

It would be interesting to see if there are key cultural symbols from the Rhineland that their Bavarian neighbors are beginning to show interest in, as some of the former are interested in lederhosen and dirndls. Unfortunately I don't really know that much about what makes Cologne Cologne, but it's something that someone else could look into.

It also makes me wonder whether "Bavarian" secession will be broader and include the Rhineland, and whether the leftover half would cohere into a single Saxon-Prussian region rather than fragment even further. It seems like a single split along the fault-line is the most likely. Somewhat like a secession in America would preserve the two similar regions of the Mid-west and the Northeast, while another cluster would include both the Pacific and the Inter-mountain West.

The future promises to be interesting. Looking at trends within pop / folk culture would seem to have better forecast value than political trends, which are slower and more of a jumping-on-the-bandwagon kind of thing.