I've already got a few other graphs up like the one below (search for "license"), but now the 2011 data are in from Highway Statistics. The percent of eligible teenagers, 16 to 19, who actually have a driver's license continues to tumble: 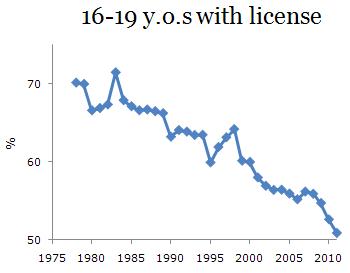 For anyone who has even minimal contact with real teenagers today, this can come as no surprise. They feel so uncomfortable around other people that they'd rather just stay home and wrap themselves in their cyber-cocoon. Feeling so awkward in a social context, they prefer that their friends exist only in a virtual world where they don't have to actually meet up with them, restricting their "interactions" to online video games, Facebook, and texting.

But enough ragging on today's defenseless dorky young people. For this installment, I've managed to dig up some older data that go back to 1963. I didn't cover this before because the driver's license data that far back only say how many people have a license in some age group, not what percent of the age group does. But in the meantime I've gone through lots of data on the age structure of the population, so I can compare the number with a license to the number overall within some age group.

My age structure data groups all 15-19 year-olds together, so I can't look at just the 16+ teenagers. But the driver's license data has a category for anyone 19 and under. Not a huge change in what we're looking at, then. 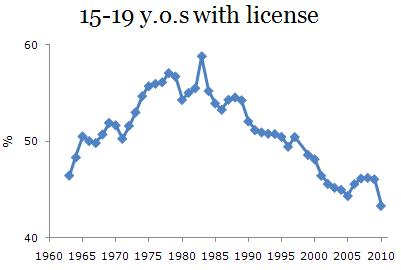 This graph only goes up through 2010, but the decline over the past 20 years is still evident. The neat thing to notice here is that it wasn't at some constant high value before the decline. That's a common misconception about declines -- that everything had been cruising along nice and steady, when suddenly something disrupted the world and we've been in decline ever since.

As it turns out, teenagers in the early 1960s were about as likely to have a license as their counterparts in the declining period of the late '90s. Before the decline, young people became more and more likely to want a license to drive, before reaching an uneven plateau during the late '70s and the '80s. The protracted decline does not begin until 1990, another example of how cocooning behavior seems to slightly precede a fall in the crime rate. (Indeed, cocooning causes falling crime rates, as the predators have a harder time finding vulnerable prey out in the open.)

What about how youthful the population is? Perhaps when it's growing younger and younger, there's a feeling of excitement in the air, and especially the young people themselves don't want to feel like it's passing them by. Better jump on board while you can, and you need a driver's license to take part in the unsupervised socializing of your fellow teenagers. 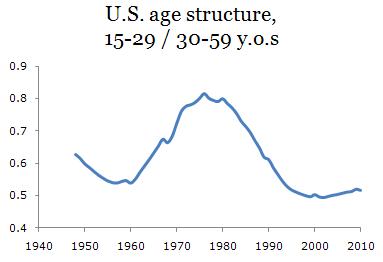 It rises through a peak in the late '70s and begins a steady fall after 1980, yet the sharp drop in driver's licenses doesn't begin for another decade. Also, there's been a steady if small rise in the youthfulness ratio since the early 2000s, yet young people have only withdrawn more and more from other people.

Again, the changes over time look more like the outgoing vs. cocooning pattern. It's more or less the crime rate graph shifted earlier by a few years. For example, youngsters seemed to become more outgoing and rambunctious a few years before the 1959 start of the most recent crime wave. And on the flip-side, they begin to withdraw into their own private spaces a few years before the 1993 start of the falling crime rate. These kind of cycles that are slightly out of synch with each other suggest that the "ecology" of criminals and normal people out in public is like that of predators and prey, perhaps not so shocking of a view but still worth keeping in mind.