"Where did Aspic go?" asks a post at chow.com. If it was dominant in the 1950s, '60s, and even into the '70s, before falling off a cliff in the '80s, then it sounds like another casualty of the low-fat, low-cal, crypto-vegetarian movement. That began in the later half of the '70s, picked up yuppie appeal during the '80s, and was a fait accompli by the '90s. Not surprisingly, all the carbs that replaced fat in the diet caused the obesity epidemic that we're still plagued by. 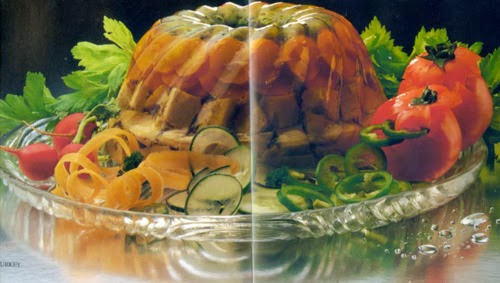 My mother wasn't that into the trend when I was growing up, so I still got to eat real animal foods when she cooked. But I don't remember savory gelatin dishes being one of them. Perhaps it was more of a suburban Fifties phenomenon, while she grew up in backwoods Appalachia, where they still had an outhouse into the 1960s. Though I definitely remember how popular the fruit-in-jello squares remained well into the '80s.

Here is another post on "The Icky Era of Aspic," showing pictures from old cookbooks. At the end it floats the lame sociological explanation that it was all just a way of showing off the fact that you owned a fancy, newfangled refrigerator. Doubtful -- there's all kinds of better ways to show that off. Serving cold-cuts that were still cold. Serving ice cream that still felt icy.

The fact that so many of them were made in those space-age looking molds suggests a more, well, Space Age motivation. It allowed you to signal your commitment to the ideal of the "meal in a pill" Way Of Tomorrow, without having to sacrifice basic wholesomeness. The pieces of meat and vegetables are recognizably fit for traditional human nourishment and enjoyment, while the look of being suspended in gel -- geometrically molded gel -- gives it the requisite futuristic cachet.

Finally, here are two more paleo recipes from Mark's Daily Apple, one savory and the other dessert.

If you're pressed for time or money, Knox gelatin packets are fairly cheap and easy to use to get more collagen in your diet. Just mix it with water or stock, and layer it on top of cold cuts like ham, turkey, or chicken that tend to have no fat these days. I've used an entire envelope with much less liquid to give it a more collagen-y than aspicky feel. Layer some canned carrot slices on top, drizzle with olive oil, sprinkle salt and pepper -- simple and delicious midnight / before bed snack.

I ought to try using a raw egg yolk as the liquid for the gelatin. The gelatin by itself puts your brain in a more relaxed, tranquil state, but it doesn't give you that euphoric, touchy-feely feeling that eating a couple raw egg yolks does.

Food is the one area of cultural life that was better before the '80s, at least as far as nutrients go. One thing that stands out after people began to move away from an animal-rich diet is how their hair doesn't look as lustrous as it did in the '60s or '70s. Eighties hair still had lots of volume, but it looks a bit finer or drier, and more obviously held out by tons of hairspray. Back when everyone was eating a pound or so of gelatin a week at dinner, all that collagen gave them richer looking skin and hair.