For all the obsession with authenticity, contemporary culture is remarkably fake. Or perhaps designed-by-committee is a better way to put it. You feel that the most in pop music -- too bland to bother turning on the radio anymore. Not since about 1993, and that's being generous. More like the late '80s.

This is only one example of the stultification of culture during a period of falling-crime / cocooning. What are the pathways, though, that lead from cocooning to committee-created culture? As elsewhere, when folks don't trust one another, they can't form a cohesive group -- not even a small one, which ought to be easy (no huge "free rider" problem).

Have you ever noticed how there are hardly any bands or music groups these days? How the hit songs are performed by a lone singer, perhaps with the occasional guest vocalist? That's what you get when suspicion is the first thing people feel toward one another. Without an atmosphere of camaraderie like you find among band members, some kind of central committee will have to arrange and supervise the relationships between the relevant players. And the players will assume a more on-the-move mercenary role -- not being bound to any particular enduring group.

One easy way to see the unraveling of camaraderie in the pop music industry is to look at who's listed under the writer's credit for a hit song. If it's a talented and cohesive group, they're probably creating everything in-house. If each individual involved in the creation is thrown together for any given song, then the songwriting is probably outsourced to a specialist (or a team of them).

I went to the Billboard Year-End singles charts, and looked up the writer's credit for the top 20 songs of the year, from 1949 to 2009 in 5-year intervals, and adding 2012 at the end. (The year-end charts for 1949 came from this site.) The criterion for counting the song as "written by the performers" was pretty strict, but that avoids having to make lots of subjective judgement calls. Namely: everyone given credit for writing the song must be a performer on it as well.

Obviously that excludes songs whose lyrics and music were written by a songwriting team and given to a singer to perform. It also excludes songs where the performer may have contributed to the creation, but received major help from outside. For example, "Time After Time" from 1984 is credited to Cyndi Lauper, who sings it, but also to Rob Hyman of The Hooters, who played a big role in writing the music. So it is not counted. From the same year, "When Doves Cry" is credited only to Prince, who performs vocally and instrumentally, so it is counted.

It's not as though getting sole credit means you had no outside help or influence whatsoever -- only that it wasn't big enough for them to be added to the writer's credit.

The graph below shows the rise and fall of pop music stars who wrote their own songs: 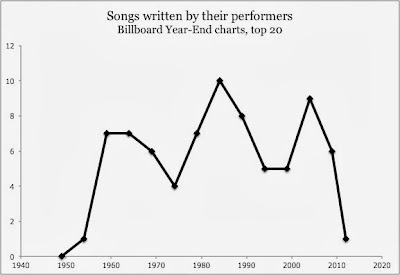 The mid-century points near the bottom are a good reminder of how fragmented the society was back then, and how afraid they were to take a chance on each other -- or on themselves. Why didn't Frank Sinatra or Perry Como play an instrument, or take a shot at writing their own songs? "I'm no expert -- best to leave that to the professionals." Hey dude, it's not like "Summer of '69" is Keats for a modern audience. You don't have to be a wiz with words. Just give it a shot and see how well it goes. You never know till you try, right? But social paralysis was as powerful back then as it is now.

Not until the 1959 point do we see a breaking away from the mid-century model. And it's not really a rock 'n' roll rebellion, as most of the early rock of the '50s was written by outside songwriters. Rather, it's pop singers like Paul Anka and the Everly Brothers sticking their neck out a little bit by doing it themselves.

The mini-decline during the '60s would be even more pronounced if I had chosen a year other than 1964 for the mid-decade point. That was the year of Beatlemania, and 5 of the 7 songs shown were written and performed by Lennon-McCartney.

There appear to be shorter cycles on top of the overall rise-and-fall pattern. First a burst of enthusiasm for new writer-performers, followed by professional songwriters jumping on the bandwagon to make a more polished product. Then audiences getting tired with the polished state of things and wanting another round of Something New.

After the mid-'70s doldrums, the next surge of originality came with disco. Most people associate the style with cheesy polyester leisure suits, more than the actual quality of the music itself. It's not easy to write for so many instruments, let alone pen lyrics that will pick people's spirits up and make them feel like dancing their troubles away. But the Bee Gees and Chic made writing your own songs look easy, and they deserve more respect than they get from the nerdier sort of pop music critic.

The peak of homemade songs arrived with the New Wave / Heartland Rock / Hard Rock zeitgeist of the mid-1980s. Even then, "only" one-half of the top 20 songs were created entirely by their performers, so there was plenty of room for professional songwriters and singers to work together on a project-by-project basis. Still, it's striking how skilled the average pop star was in the '80s. Can't hand off those guitar solos to someone else -- that would be a loss of honor.

By the late '80s, there were more professional outsiders jumping on board during the twilight phase of rock and synth-pop. But unlike earlier periods, things did not bounce back with Something New during the '90s -- or the 21st century, for that matter. Something that only the performers could come up with by themselves. There was a blip in 2004, perhaps another example of the mid-2000s respite from the overall boringification of the culture since the '90s. However, a lot of those songs are rap, hence the "songwriting" quality is not impressive. No singing, for instance, just plain speech.

And now we're right back to mid-century levels of creation-by-committee. It's mind-blowing to look at writer's credits from recent years -- sometimes 3, 4, 5, 6 people being listed. Perhaps the performer is thrown in there somewhere, but they are mostly being supported by an ad hoc team of consultants. And the results are predictable. There's no real sense of passion, commitment, and camaraderie. Each song sounds like the individuals involved were just going through the motions, rehearsing a script.

The only song written by the performer in 2012 was "Somebody That I Used to Know" by Gotye, which is easily the only halfway decent song from last year -- and the most distinctive. It didn't sound like the rest of the 21st century centrally planned pop pap. It's reminiscent of The Police or Peter Gabriel, not out of blind imitation, but simply because songs sound more memorable that way when their performers have something personal invested in them.

As for the rest of it, future generations will probably resonate with it as much as they would with Rosemary Clooney and Eddie Fisher. Meanwhile, they'll still be playing the Beatles, the Bee Gees, and the Boss.