The decline of outdoor fun, and the graying of park-goers

We've already been over how Halloween is no longer a special night of unsupervised romping around for children, how toy stores offer little to boys who want to horse around and shoot things at stuff, and how video game arcades started vanishing around 1989. What other dangerous places are out there that helicopter parents would rather die than see their children spend time at? Parks!

As a kid, I never went to any neighborhood parks with my parents -- "Mommmm, get away from me!" -- unless it was far enough away that I needed them to drive me, such as Mirror Lake on the OSU campus or Griggs Reservoir on the Scioto River. Places cool enough that it was worth having to have your parents there. Otherwise, my friends and I would either walk or ride our bikes to the park and do whatever we wanted -- without our parents constantly swooping in every time we scraped an elbow or got our kite caught in a tree.

Not only that: we did this strange thing called "camping," where you spend the night outside in a park. It was usually for Cub Scouts, but we went on family camping trips too. For a quick fix, we'd just set the thing up in the backyard and sleep outside. (I have a vivid memory of when I was 3 or 4 years old and camping outside for the better part of the evening, unsupervised, while my parents were watching Knight Rider in peace for once.)

Ah, but today's parents know better -- going to parks without a chaperone is just asking for your kid to get murdered, and who has enough time in the day to go along with them? So going to parks for fun is out, and camping is definitely out -- you lose a day and a night of your schedule! But if the schools want to take them on a field trip, that's OK.

Indeed, that's just what national park data show. I pieced these graphs together from various editions of the Statistical Abstract of the United States, going as far back as there were comparable data. First, here is the per capita rate of overnight stays at national parks: 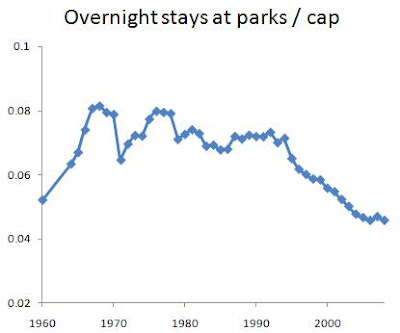 Camping became incredibly popular during the 1960s, and despite flagging somewhat in the early 1970s, picked up again for the rest of the decade. Throughout the 1980s, its popularity is a bit lower than before but still holding steady. Starting in the early-mid 1990s, though, camping rates decline steadily up through 2008. This is silly since there's never been a safer time to go camping, and with environmental regulations out the ass now, you figure the parks have never been cleaner.

Here's a similar graph for national park attendance for recreational vs. non-recreational purposes: 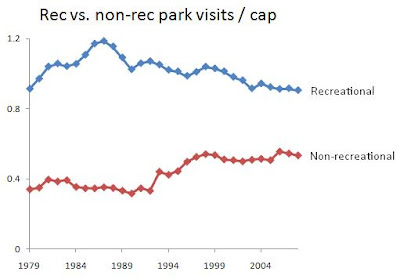 Here the decline in going to parks for fun starts in 1988 and hasn't recovered since. Starting in 1993, though, non-recreational visits increase logistically (or in an S-shape), as though a switch were turned on and we went from one state to another. I'm not sure exactly what "non-recreational" includes -- could be the schools trying to make up for their students' lack of fun by giving them field trips, could be convicts being put to work cleaning the place up, or something else. At any rate, fun is down while forced attendance is up.

As with the numerous other examples of young people's social spaces evaporating and leaving them with nothing fun to do, the major change in playing at parks and going camping seems to have been in the late '80s / early '90s. I can easily recall three pop culture examples of camping out from that time, but few from later on: the Simpsons episode where Homer gets the family lost in the woods during an RV camping trip, the episode of Saved by the Bell where they camp out in a sporting goods store in the mall in order to be the first in line for U2 tickets the next day, and that horrible movie Career Opportunities where babalicious Jennifer Connelly and some schmuck are trapped inside a Target store and they make out or do it in a tent.

Today no one would get what the characters are doing, since the poor bastards born after roughly 1987 -- the Millennials -- were the first generation (at least in awhile) to have helicopter parents all around them. You'd think that they'd be more grateful than any previous group to go off to college and roam around unsupervised. But from what I can tell here at a big state school, they aren't horsing around even now. Most are continuing the only thing they've known growing up: glued to the internet, TV, or video game system, and fumbling with their ipod or cell phone.

It's quite rare to see people outside enjoying the expanse of green grass, laying in the shade of a tree, or playing sports of any kind. And that's not just on campus -- the three most popular parks nearby also lack a young-people presence. It's mostly people 25 and over, typically 35 and over, who are jogging in a futile effort to lose weight (just eat less carbs), showing off their toy dogs to the other toy dog owners, plus the odd hippie Boomer staying in touch with Gaia.

Parks -- another space seized from young people by grown-ups.