Over at GNXP.com, I put up a post on detecting the education bubble's effects even in high school. Toward the end, I mentioned that it's odd that lots of blog writers use the term "education bubble," whereas it doesn't appear even once in the NYT. Maybe they're ignorant of the trend? Or maybe as part of the whole credentialist system, they don't want to let the cat out of the bag about lots of people wasting their time in college? Let's see.

Here are graphs showing the annual undergraduate tuition for 4-year degree-granting institutions in the US, adjusted for inflation (data here), and the coverage of the topic of tuition in the NYT:

Now, here is a graph that compares coverage and cost of tuition. It is the number of articles divided by the cost, in thousands, of tuition. It answers the question: "For every $1,000 that tuition costs, how many articles were written about tuition?" 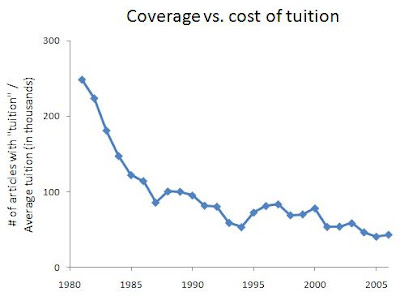 Since coverage is fairly constant (using absolute or fractional coverage), while cost is exponentially increasing, the ratio shows an exponential decay curve. The alarm bells are not going off, despite suggestive evidence that we're headed for trouble. Again, you wouldn't see this if we had an exponential increase in terrorist attacks year after year for 30 years. But it's higher education, which is a Good Thing, and therefore cannot involve high risks or costs. So, we don't need to bother reporting more and more about rising costs and what effect they may have down the line.

We need to stop sanctifying higher education and wake up to the reality that most "colleges" are just glorified daycare centers, and that most non-technical and non-professional graduate programs are pyramid schemes -- did you ever notice how there are lots of grad students and few professors? How will they all get jobs as professors or even lecturers? Obvious answer: they won't. But those who do can help recruit another 10 grad students per professor and dangle the carrot in their faces, and so on again.

Unless the plan involves a technical or professional school that brings about a clear boost to job security, the next time you hear someone, usually aged 24 to 39, say that they "really want to go back to school for my Master's," tell them to get a life.