A real disadvantage of women of mothering age or older (roughly the latter half of the 20s and beyond) is that they just can't move like younger girls. I don't think I need to spell out the key reason why that's no fun. But it shows up everywhere. When she's dancing, she can't bounce or spring up and down, keep her body in a provocative unnatural position, and so on. She won't have that natural spring in her step, or have an uncontrollable urge to kick her leg out and try to balance herself when taking pictures. And she won't hop into your arms to hug you -- odds are her feet won't leave the ground at all. Borrrrinnnnng.

Just to show how quickly flexibility is lost with age (and thus why all professional gymnasts are young), here's a graph from this article on hypermobility (aka double-jointedness): 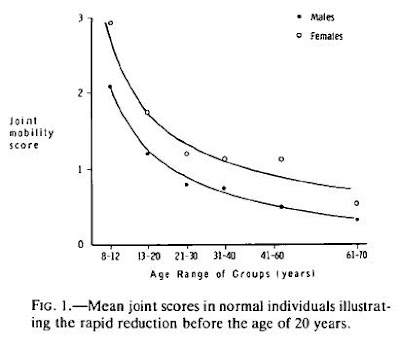 The female curve is above the male curve for all ages, which confirms our hunch about sex differences. However, that difference is puny compared to the yawning chasm between young and old. Here, "old" isn't even that old -- they've already bottomed out to their 50-something values by the time they're in their 20s. Unless they make a strong effort, like if they're a professional dancer, they totally lose it. The only post-pubescent group that's still pretty flexible is teenagers. Ahhhh. Just in case you forgot why this combination is so heavenly, here are a few reminders (pictures OK, but ads NSFW):