No more innovation in toys?

While out yesterday I passed by a Toys R Us and stopped in on a whim, to see what crazy new toys the kids are playing with these days. To my surprise, the selection was nearly identical to when I was a pre-pubescent kid 20 years ago. The only major change is the layout of the store -- lots of open space with islands, rather than densely packed long aisles.

Action figures didn't really exist until the 1980s (there were some doll-like figures before that), but during the past 20 years, there doesn't seem to be much new about them. Hell, a lot of the lines were the same as 20 years ago -- G.I. Joe, Transformers, Star Wars, Teenage Mutant Ninja Turtles, professional wrestlers, etc. The only new thing about action figures seems to be that they're a little bigger than before. Related to that, I saw very few of the "shitload of small guys" toys that used to be standard -- those green plastic army men that you bought by the hundreds, M.U.S.C.L.E. figures, the Trash Bag Bunch, and so on. This must make keeping the toybox in order a lot easier on parents today! Also, no scary monster toys like Boglins, the Inhumanoids, etc.

Video games also became staples during the 1980s, and compared to Nintendo, Sega Genesis, and Super Nintendo of roughly 20 years ago, there's been no sea change in video games, other than 3-D graphics being standard. Actually, there is one major innovation -- the first-person shooter genre. But since these games are more boring than other genres, this isn't much to cheer about.

Erector sets were invented in the early 20th C, and again there was no huge change apparent in what I saw. In fact, the related Lego blocks seem to have gotten much worse -- now, they involve little imagination. There's some preconceived thing, such as a plane or a castle, that you put together by following the instruction manual. The blocks are specialized to this thing, unlike the bland blocks that you could reassemble into anything else you could think of. There were only a couple of buckets that contained lots of all-purpose blocks; most were specialized kits. Most of the duplo Legos were all-purpose, though -- y'know, those big fat ones for pre-schoolers. It really seems like they've sucked all the fun out of Legos.

Board games also go way back, and there doesn't seem to be anything super-new about them.

Ditto for sporting equipment. They have those slicker-designed two-wheel scooters now, but we had those awhile ago too. I didn't inspect everything there, but I saw a lot less of what we used to have -- now, it's only the stuff required for standard sports (rollerblades, basketballs, skateboards, bikes, etc.). I don't recall seeing pogo sticks, pogo balls, that thing... well, it was a disk-shaped thing that was tethered to your ankle, and you swung it in circles on the ground with one foot, and hopped over it with the other foot, like jump rope. The point is that there didn't seem to be as much of this zany goofy stuff as when I was a kid.

They didn't have nearly as much of the "disgusting crap" category as I recall -- make your own monster goop, a playset where you drown figures in slime, that kind of thing. There was a little, but most of it has been turned into chemistry set-like stuff, or Play-doh. Again, chemistry sets are nothing new. 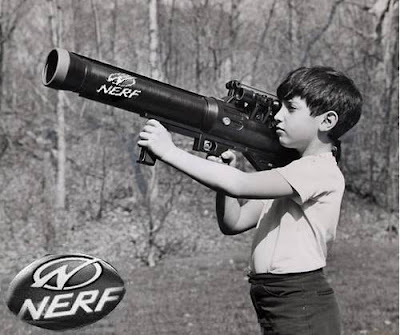 There were a lot less "suit up for battle" toys -- guns, swords, shields, helmets, vests, etc. There were rapid-fire Nerf guns, something that I wish I'd had as a kid. There used to be an entire aisle filled with kits that gave you everything you needed to be an army commando, a "wipe away the urban filth" cop, Indian warrior, medieval knight, or whatever. The desire to suit up and go kill things hasn't vanished among boys, but it's hard to express when you don't have access to the tools. Again, little is new.

Stuffed animals likewise had nothing really new -- although I suppose the list of interesting animals is pretty limited -- and have been around forever. As with action figures, there were no scary monster stuffed animals like My Pet Monster.

The only thing that I saw a lot more of yesterday compared to 20 years ago were electronic learning thingies -- give them their first laptop so they can begin spelling! Still, they're not very different from the PAWS typing game or Number Munchers that I played on my elementary school's Apple IIe computers. The doo-hickies I saw were just improved versions of Speak & Spell, but now this category takes up lots of space, whereas 20 years ago parents were more realistic about how appealing this gay crap would be to 8 year-old boys. School handles the task of literacy just fine.

So what's up? Each decade through the 1980s saw some huge new category of toy introduced -- with the 1980s introducing both video games and action figures, which appear to still be the most popular toys. Many of the other categories are even older, such as erector sets, stuffed animals, and board games. Worse, the current versions of these toys appear hardly modified since at least 20 years ago. Moreover, a lot of the cool stuff of yesteryear has simply vanished, especially toys that encourage rambunctious or mock-violent play -- helicopter parents.

Usually when innovation dies down in a field, it's because there used to be a monopoly that, due to its insulation from competition, had huge coffers and could afford to devote a lot of it to high-risk projects. If there's too much competition, you don't have a bottomless purse, and you're too focused on treading water than on taking huge risks on the Next Big Thing. The prototypical example here is Bell Labs or the DoD during WWII and the Cold War. Once AT&T was busted up by deregulators, starting in the 1970s and culminating in the 1984 divestiture, major technological innovation basically stopped.

Maybe something similar happened in the toy industry. I could look that up, but maybe later. Just wanted to bring it up while the thought was still fresh in my mind. Of course, there could be a big demand-side aspect to the change, as parents are more hyper-protective of their kids than ever before. That would certainly explain why there are so many learn-from-a-laptop toys and hardly any swords-and-shields toys.

There's obviously a huge market to exploit -- young boys who want to pour slime on stuff and shoot projectiles at real-life targets -- but getting to them would be pretty tough, since you have to get by their parents. So, opening your own store is out. You couldn't even try to sell them toys hush-hush at the playground or park since kids aren't allowed to go anywhere without a parent or some other annoying grown-up watching over them. And even if you could, it's not as if the kids themselves would have enough money to buy the toys they crave deep down. I usually can't stand to hear the phrase, but for once I blame the parents. Lighten up and let your kids have some damn fun, while they still can.

Update: When I went looking for a picture of "toys" to include, Google Images returns a whole hell of a lot of pictures of sex toys. Now there's a toy industry that's seen lots of innovation and an exponentially exploding consumer base over the past 20 or so years. This is yet another example of how society has become more grown-up since roughly 1990 -- malls are for affluent adult professionals, not kids or teenagers, Halloween was overtaken by skanky women, and the adult sex toy market is flourishing while children's toys are stagnating.