Homicide rates over the past 800 years

I recently got this comically smug comment in response to my claim that most people who long to live in the golden past are gay arts majors who have no clue what it was like:

Straight, history major, know lots about the 19th Century, long to have lived when the ideal of monogamy ruled, and crime rates were orders of magnitude below what they are today.

To each his own.

Not to pick on this guy in particular, since flapdoodle like this is everywhere. Still, let's put this nonsense to rest. Here is a graph from this review that shows homicide rates (per 100,000 population) for England over the past 800 years: 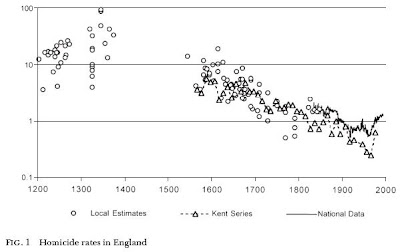 The review has similar graphs for other European countries, but the overall picture is about the same, with the exception that violence started to decline much later in southern Italy compared to northern Europe. The scale of the homicide rates is logarithmic, so each line going across represents an order of magnitude. Also note that the graph doesn't show the steady decline from the early-mid 1990s up through 2008. As we see, in the 19th C homicide rates, which correlate with other violent crime, were not "orders of magnitude below what they are today" -- if anything, higher. So much for the guy who "knows lots about the 19th Century" -- fictional novels don't count, only history.

Where do we observe order-of-magnitude differences? Between roughly the Industrial-and-after era compared to the Elizabethan era, when a typical day of amusement would have included a stop to see bear-baiting in specially dedicated arenas, or paying to stand on the rooftops near the gallows to see criminals hanged in front of a mob.

The next order-of-magnitude difference takes us back to the late Middle Ages, about 1350. Ah, the good ol' days of repeated famines, Mongol raids, and the Black Death. The climate was warmer back then too -- and you know how rowdy people get when it gets hot out.