Coverage of rape increasingly out of touch with crime statistics

I've documented the hysterias about sexual harassment, "date rape," sexual predators, pedophiles, etc., both here and at GNXP.com, and perhaps later I'll find them and provide links. Briefly, they show a surge during the 1990s, when third wave feminism took hold. I mentioned that these hysterias were irrational because all violent crime, including forcible rape, had begun plummeting right at the same time. Women should have been rejoicing rather than panicking.

Now I've put together the two statistics into a single, easy-to-read graph that shows how outta-whack the media's coverage of rape is. I've taken the fraction of all NYT articles in a given year that contained the word "rape," which is a measure of how in-the-air the topic was. I've also taken, for each year, the Bureau of Justice Statistics' forcible rape rate (number of rapes per 100,000 population). This is a measure of the risk of rape -- or how much a rational person would worry about rape. I then divided the newspaper coverage by the rape rate. This gives a measure of how irrationally hysterical people are -- it gets bigger when the rape rate stays fixed and yet people begin talking more and more about rape, or when they talk about it at the same level all while the rape rate is actually shrinking, or when they talk more about it and the rate declines. 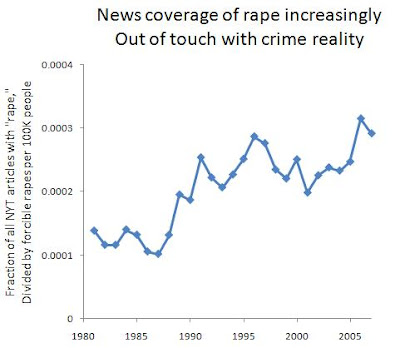 The values bounce around at low levels from 1981 through 1988, with a bottom in 1986 - 1987. There's a clear jump in 1989, and it takes off from there. In recent years, the value has been about three times as large as during the 1980s. This is due both to an increase in coverage as well as a decline in the rape rate, which we can see here in the separate trends:

I obsess over these topics because there was a profound social and cultural shift starting in the 1990s, and we hardly talk about it. We're still wasting our time talking about the late 1960s. One of the biggest changes was that we became more civilized -- violent crime fell off a cliff (and still is -- look at the BJS data, and even the new 2007 values are down from 2006), young people became less promiscuous, and so on. But our popular culture went in the opposite direction, still finding something to worry about, even things that statistics showed were shrinking.

It's a good reminder to always check the relevant facts before swallowing what the media says -- most of the time, they don't check facts or do research, but merely relay to the readers what someone else told them. They're like the school gossip who spreads rumors, some of which may be true and some of which may be false. If you notice yourself caught up in a hype bubble, you should step back, do some research, and determine whether the hype is deserved or not.

The generalized hysteria of the early '90s peaked around 1991, but was already underway by 1989. These data show that. I was pre-pubescent in 1991, so I have to reconstruct a fair amount of this from actual data, rather than rely on memory. One thing that tipped me off about the panic beginning earlier, around 1989, is that that's the year when Heathers was released. It is the first true Generation X movie -- and the only good one -- and the theme of "date rape" shows up at least three times. You didn't see that in any of the earlier teen movies, so something had clearly changed.

Many guys, most of them gay arts majors, lament that they were born in the wrong century -- O, to have lived when the ideal of courtly love ruled! Most of them don't have a clue what life was really like during their cherished past. I, however, long to have been born in 1962: I would've been 25, the peak age for chasing teenage girls, in 1987, when the battle between the sexes was at its lowest point since the 1950s (and when girls were still fairly promiscuous). I'd have been too old to really be affected by the early-'90s bullshit when it hit, and I'd have been way too young to be a Baby Boomer dope.

I've labeled this cohort from roughly 1958 to 1963 the "disco-punk" generation before, based on what they heard as teenagers. But the "college radio" generation would do just as well, since the leaders of all those groups were born in this cohort (maybe I'll show that some day, but you can check for yourself at Wikipedia). Don't get me wrong -- I'm glad I was born after Generation X, and I've had a blast so far. Another generalized hysteria will strike sometime in the middle of the next decade, and I'll be in my 30s then -- unaffected by it. So I was lucky to make it into one of those silent, not-so-serious, fun-loving generations, sandwiched by loud-mouthed, overly serious, mopey / whiney generations.