The temptation of Saint Agnostic 5: Kylie

Previous parts. All identifying words have been changed.

Kylie is Riley's girlier, non-alpha sister, who was also 15 to 16 when I was 25. She liked me as much or more than her sister did, but being less aggressive, made more girly advances. While I was checking another student's work, she was sitting next to me and began tugging gently at my suit sleeve. I had to ignore her in order to finish up with the other student, so she kept tugging for awhile, smiling up at me when I turned around.

omg he's so letting me touch him and he's not even like moving away!

At one point during Valentine's Day, she was frozen in place like a sniper, and as I passed by, she quietly forced the words "hey agnostic, will you be my valentine?" from her lips. I was zooming around from one area to another, so I didn't even register what she'd said until a good 30 seconds later, and therefore didn't respond. When it dawned on me, I thought she must be dying of embarrassment from being ignored after such a bold self-exposure.

So I went over to her and matter-of-factly asked, "Hey did you ask me something before? I was running around like crazy, so I didn't hear you..." But by that time, she'd been crushed: "ummm...well, no... not really..." I knew she'd get over it, but it still feels bad to accidentally hurt a girl of that age. Intentional teasing is one thing, but it was as if I'd oafishly trampled over and broken her little foot in my haste, no matter if her resilient young bones would heal quickly.

During the summer, she grew more bored of tutoring, and therefore more desperate. "agnostic!" she cried from 15 feet away. Yeah? "...come over here..." Why, what do you need? "....just... come over here." OK, what is it? "oh nothing... i just wanted to know what you're up to this summer! what are you doing???" As cute as it is when they call you over for silly talk, I had to get back to my other students, so I told her just a little bit about visiting M Street in Georgetown, doing some research in the GWU library, etc.

Then after I'd returned to my assigned students, she walked over -- "hey agnostic!" Yeeeeeessss? "....ummm... let's have a staring contest!" I decided to indulge her -- and myself -- because it was a slow summer day, and it would be a pleasant relief to wade out into the pool of her big, brown eyes. I won, of course, and dominating her in a contest that she started was her point of no return. Girls, especially young and hormonally possessed ones, dream about spying a guy from afar and sneaking up to him, at which point he acts unsure about her worth but ultimately chooses to overpower her and sweep her away. Just go to your local '80s night, one where lots of college girls hang out, and wait for "Like a Prayer" to come on -- that song puts their pussies into the deepest trance.

Once, as we were closing up, she and her sister ran up to me and got all up in my face to see if I'd crack. The alpha Riley just locked eyes and fired rapid questions, her eyes wide and her mouth grinning. Kylie, although staring at me, kept a bit away and didn't say much -- until she lept at me shouting "Italia!" She sprung into the air with her chest thrust out and arms slung back, smashing her left breast into my right shoulder, and smiling mischievously.

The final blow came as she and her sister were waiting to be picked up, and I walked by the office they were sitting in. As I came into her view, she reflexively blurted out to everyone in the room, "omigod, look at agnostic, he's sooooo cuuuuute...." She had a longing tone in her voice and a pained, saddened look on her face, like "could he ever think i'm cool?" I pretended not to hear that and went about my business. They left a month or so after that, although I did hear back from her a few times. Another milestone in teenage temptation -- those sisters, I'd be pursuing someone closer to my age right now if it weren't for them!

That was three years ago, and looking back, I see how much my tastes have changed. Then, I would have preferred getting fired over Riley, the more wild and popular queen bee, while now I recognize how much I'd underrated her girlier sister Kylie. It wasn't an act on her part either -- no exaggerated skipping around, etc., although like every adolescent girl she did think of herself as a princess. It reminds me that I should find a way to interact with girls her age in a normal setting again, since it took some getting-to-know-you time for Kylie to start crushing on me, whereas her higher-testosterone sister became interested much sooner. 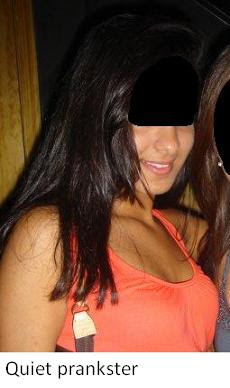