Looking back on adolescence in the '90s, one of the things we were gypped out of was the not-so-serious attitude toward school attendance that they had even within the recent past. We still had senior skip day, but it seemed like the too-cool-for-school days were over.

Part of it may have been greater acceptance of school authority, although more worthy of examination is the idea that young people just got a lot lamer during the '90s, continuing through today. It's not like we had the same underlying desire to occasionally skip school as the generation just above us had, and that we were simply better at keeping a lid on it. I think it just didn't strike as many of us as a fun thing to do in the first place.

To figure out what the data say, I went to the Statistical Abstract and the NEA website for more recent years. They publish tables for fall enrollment and Average Daily Attendance over the years. Take the ADA as a fraction of fall enrollment, and subtract from 100% to find out what percent of students were absent on a typical day.

Unfortunately the data on ADA don't separate the primary from secondary students -- we'd really like to know how likely the middle and high-school kids are to be absent. The data collectors sensibly don't bother trying to break out excused vs. unexcused absences, which would be a nightmare for a national group to untangle for every school. Nevertheless, we can get a good-enough feel of the school-ditching culture.

The data go back to 1870, but I've restricted it to 1960 forward. If you look at the whole series, it's just one steady decline in absences, reflecting the switch from a more agricultural to industrial and information-based economy, where parents push their kids to stay in school forever. You can't infer from high absence rates that kids in the 1880s were in a hookie-playing mood, as they were probably working around the house or farm, or perhaps working for wages. 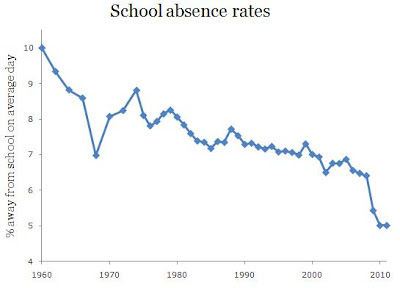 There are several periods when kids reversed the overall downward trend. The largest started in either 1969 or '70 and lasted through '75, the heyday of "turn on, tune in, drop out." Another reversal lasted from '77 to '79, when Cameron Crowe was doing his fieldwork for Fast Times at Ridgemont High. Rounding out the era is a reversal from '86 to '88, when Ferris Bueller's Day Off was a top-10 movie at the box office.

There's also an isolated reversal from 2003 - '05, part of the mid-2000s euphoria when the culture edged slightly back toward the good old days. As you can see by the shallow and then precipitous drop afterwards, those days of respite are long gone. Millennials born in the late '80s and 1990 enjoyed a brief glimpse of real life back then, and hopefully that influence will last (although I'm not counting on it). If they were born in 1991 or after, they missed out.

That really sharp drop beginning in 2009 (i.e. the '08-'09 school year) matches my impression of teenage culture. Along with the rest of society, they were still having fun up through the summer of 2006, and then there was a shallow decline up through the summer of 2008. Somewhere around fall '08 through today, they've totally reverted to the trend of the past 20 years toward dorky and tame behavior.

I wonder what the qualitative changes are like that are not evident in the quantitative picture. If you skipped school in the '80s, you probably went to some public space (mall, park, arcade, bowling alley, etc.), or to a friend's house who also skipped with you. I'll bet my life that today, those kids who do skip school you'd find holed up alone in their room playing Halo, Skyrim, or whatever, the day after it comes out.

Putting that aside, let's treat the act of skipping school as a threshold along a continuum, with people distributed along it in a normal curve. Then compare the end of the era subject to three closely spaced reversals (1988), to the present day. School kids today on average are 0.22 SD further in the obedient or unexcitable direction compared to their counterparts less than a generation ago. That's not a sea change, but remember how fast it happened. It'd be like school kids shrinking 2/3 of an inch in height during the same time.

If your attitude toward school attendance persists at least somewhat throughout your life, by now the teachers are probably more likely to ditch class than the students.