In an earlier post we saw that Jews are much less religious than Christians, even when you only look at white liberals with high enough IQs to be college material. The measures for religiosity there were belief in god, beliefs about the nature of the Bible, and frequency of attendance for religious services.

Poking around the General Social Survey, I found a couple other relevant questions (and that still yield decent sample sizes to compare Jews to Christians and no-religion people). These get more at the subjective, almost social relationship between a person and god. One asks how close you feel to god most of the time, and the other how often you pray. 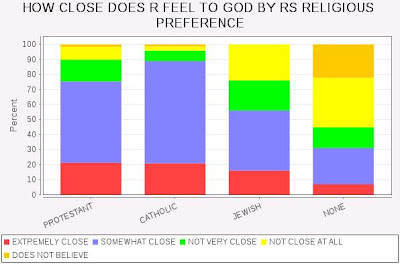 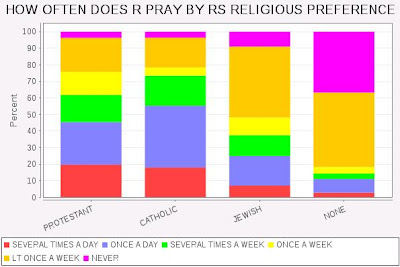 Just as before, the Christian groups look fairly similar to each other, the no-religion folks are the farthest away from them, and Jews are in between, although closer to the no-religionists. Those who feel "not very close" or "not close at all" to god make up 23% of Protestants, 10% of Catholics, 44% of Jews, and 47% of those who profess no religion (not counting the extra 22% of them who don't believe). My guess is that people who don't feel close to god to begin with are more likely to be drawn to Protestantism, especially the born-again types.

As for prayer, 45% of Protestants pray at least once a day, as do 55% of Catholics, compared to only 11% of no-religion people and 25% of Jews. The farther away you feel from god, the less you feel like praying to him.

So once more, the usual factors that explain religiosity are not the only reason why Jews are less religious than Christians. There is some set of genetic and cultural factors unique to them that split them off in the graphs above and that indeed place them closer to people who identify as having "no religion."

As I mentioned in the earlier post, those are primarily the genetic adaptation to the white-collar managerial ecological niche, and the cultural tradition of legalistic bickering. The first leads them to not concern themselves with god -- they figured out the right interest rate to charge because they've got big brains. And that goy hick who was trying to get away with sending less money to the tax farmers, well they ran circles around him because they're so clever. As we saw during the mid-century, managerialism and godlessness tend to go together.

The tradition of legalism makes it less necessary to have any kind of personal or quasi-social relationship with the supernatural. Just follow the rules, and you'll please god, and he'll treat you well, kind of like the school principal who you rarely meet unless you fuck up the rules big-time. It just goes to show how far the Talmudic religion has departed from the Yahwehism of the Old Testament.

Julian Jaynes discusses several groups within more modern history that show thought processes closer to those of the "bicameral mind," where people experienced a guiding god very personally -- as a hallucinated voice that commanded people, in Jaynes' view. Shamanic figures are the best example. But he didn't discuss the opposite groups -- who are the ones who've taken the bicameral breakdown ball and run with it?

That would seem to be the Talmudists. As we've seen in this series, they've gone the farthest in making a religion where the relationship to god is abstract and out-there rather than concretely embodied, impersonal rather than personal, and mediated by a squabbling scribal class rather than direct.

Some degree of freeing ourselves from that bicameral mind seems to have been for the better, but there is such a thing as taking it too far. Feeling closer to god and reaching out to him may not directly affect how the outcomes of possibilities turn out. Still, it may introduce a sobering dose of humility when we're planning things out. It's no accident that Jews, whether Talmudist or atheist, have gone the farthest in proposing and struggling to implement the most wacked-out design specs for a human society, Karl Marx and Ayn Rand just being the tip of the iceberg.

Lord knows that non-Jewish white liberal smarty-pants have tried to push us in the same loony direction, but they do not shove with quite as much oomph as their Jewish fellow travelers do. Part of the reason why the Gentile autistic planners haven't brought mankind as close to the brink must be their Christian upbringing during the formative years, whatever became of it in adulthood, and their lesser genetic adaptedness to managerialism.