The General Social Survey asks four questions about whether a person has the right to kill themselves in different scenarios: having an incurable disease, having gone bankrupt, having dishonored their family, and being tired of living and ready to die.

They are all positively correlated with each other, so I reduced them to just one underlying factor, suicide support, using factor analysis to compare years. This makes the value less interpretable -- it's like a z-score, comparing where the year stands compared to the rest of the years, instead of an absolute statement like a certain percentage support some position. At any rate, higher scores mean higher support. Here are the results: 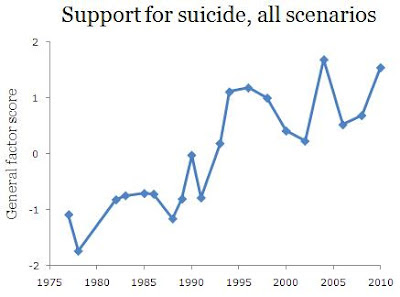 I haven't looked into popular views on suicide during the mid-century or the Jazz Age. Even with this narrower time focus, the fact that the upward shift happened in either 1992 or '93 suggests a link with the trend in the crime rate. The whole society got a lot less violent, and that includes suicide rates as well as homicide rates. People who hear less frequently about suicides might be more clueless about them, and so naively grant them more dignity than they deserve.

Still, mere cluelessness doesn't produce a bias in the more accepting direction -- people who are clueless about suicides could hypothetically be more intolerant of the unfamiliar. What makes their lack of familiarity go toward more, not less, acceptance?

Here we see the role of the cocooning trend of falling-crime times, as safer environments make people feel less of a need to connect with, rely on, and look out for each other. "You want to off yourself? Well, hey, it's your life, and I have no stake in it, so I don't care what you do with it." That's not how you respond to someone you are connected to when they bring up the idea of killing themselves.

This is a general principle: the more overlapping your lives are, the more intensely you care about what they do with theirs, because it is partly yours. They don't have 100% veto power over their life because it's embedded in the lives of many others. And reciprocally, you yourself don't have 100% veto power over your own life. So it's not like slavery, where the person has no say over what happens to them, but neither is it the pure autonomy of an atomized, hive-like society. It's a community-minded world where all concerned get to weigh in, perhaps according to how affected they will be by the decision -- like, close friends have more say than co-workers when someone they all know is thinking of suicide.

Maybe I've just been skimming or reading the wrong things all my literate life, but I can't remember reading anything useful on this topic that was philosophical or abstract. Until someone close to you (or who was once close to you) kills themselves, you won't understand that the suicide has robbed something from other people, involving life itself. He has not taken their lives, as though it were murder, but destroyed all their "shares" in his own life.

And often enough, in leaving he delivers one of the ultimate insults to those near and dear to him -- that "you guys are just too dumb, too callous, too cheery, or too whatever, to get my situation, and so it wouldn't be any use trying to reach out to you all for help." Gee, thanks for the vote of confidence, and for giving us no chance to defend and prove ourselves against the charge.

One consequence of that shift shown in the graph is that we're less likely these days to see the suicide as someone who needs to be forgiven by others for the harm and disorder that he chose to throw into their lives, and more likely to see him as a helpless victim buffeted about by "social forces." Anything to view our relationships with others in impersonal, emotionally avoidant ways.