One of the clearest signs of the mid-2000s euphoria, which briefly halted or slightly reversed the wussification trend of the past 20 years, was the enthusiasm for music of the later '70s and '80s. That included the original bands as well as new bands who did a halfway decent interpretation of the originals, like the Libertines, the Raveonettes, or Franz Ferdinand.

By the same token, perhaps the clearest sign that the door of history has slammed shut on that whole zeitgeist is the growing apathy toward great music from the past. To try to quantify this, here are the changing frequencies of searches for music from different decades, using Google Trends. (That is, a search for "X music," where X could be 50s, 60s, 70s, 80s, or 90s.) They are all re-drawn as a fraction of their maximum, putting them all on the same scale. And they're just from the United States. Click to enlarge. 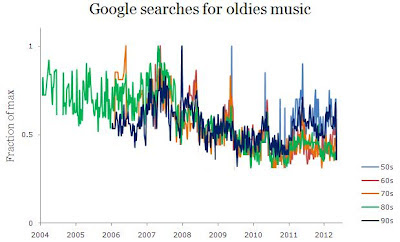 The main thing to take away is the decline in interest that starts off either in 2007 or early 2008, becomes complete by 2010, and has remained at that low level for the past two years (well below 50% of the peak interest level). That's no matter whether the person was looking for '60s, '70s, or '80s music. The brief rise-and-fall of those music video games like Guitar Hero and Rock Band reflect this too. They also reflected the more outgoing atmosphere back then, where people used video games in a more face-to-face, out-in-public way than they had been during the '90s, early 2000s, and late 2000s through today.

The only decade to bounce back is '90s music, where interest has been growing since early 2011. What a joke. That's also the time that interest in '50s music begins, as it was not part of the mid-2000s revival movements. This strengthens the idea that the mid-2000s had a somewhat more rising-crime feel in the zeitgeist, probably as a response to 9/11. Now that we no longer feel threatened, we're beginning to revive the culture of previous falling-crime eras like the '90s and '50s.

I've really noticed this change at '80s night, which I started going to every week sometime in early 2008 or maybe late '07. By the middle or end of 2009, it felt different, not quite as energetic and social. Last year I confess I played hookie from it for probably half the year, and then after going back for awhile, I've stopped going again for the last couple months. I'll give it another try during the summer. I have no trouble getting into it, if the music and the crowd are on board, but that's changed a bit, reflecting what's shown in the graph.

For one thing, the music had gotten more homogenized and stereotypical, like the songs aren't being played to get people worked up but to serve as references that the audience feels special for getting. It borders on self-consciousness and makes it hard to feel lost in the crowd.

They used to play the Cure, Pet Shop Boys, Oingo Boingo, and plenty of others that you don't hear at all anymore. Even those who they still play, it's only their single most famous song, whereas earlier they also mixed in "Planet Earth" by Duran Duran, "Lucky Star" by Madonna, "Strangelove" by Depeche Mode, and so on.

And the crowd has grown a lot more socially retarded (it's been mostly college-age kids all along). The guys are somewhat dorkier, but it's mostly the girls ramping up their attention whoring. The "boys are yucky" mindset is so pervasive that it's hardly necessary for their circle of chick friends to cockblock guys anymore -- she doesn't feel tempted to get close to boys in the first place. It's not as though face-to-face interaction was so common even 4 years ago, but now it's rare to see girls dancing with boys at all.

If the revival is done for good, I can't complain. '80s night has given me lots of memories over the past 4 years, not to mention when I was going out twice a week in Barcelona during 2004 and '05. Those really were the peak years. It was so fun to enjoy both the old music they played (Joy Division, Ramones, Cure, etc.) interwoven with the new bands that sounded similar. It felt more timeless, less self-consciously retro. Plus that club was open until 5am! Once it even landed on Daylight Savings Time, so we got an extra hour still...

And anyway, there's always the likelihood that when we get back to the same point in the crime cycle, there'll be a much broader and authentic resurrection of '80s culture. I'll probably be in my late 50s or 60s by then, but I expect to still be active and ornery enough to enjoy whatever is waiting for us.