Long-haired dudes now keeping it up in a bun?

Over the past 20 years, the whole distribution of hair length on men has shifted toward the shorter side. Guys who would've had hair halfway down their back now grow it around shoulder-length, while more conservative guys who would've had 4 or 5-inch hair now keep it very short. Even bald men didn't totally shave it down to the scalp like they do now.

In light of all the other social and cultural changes of the past 20 years, compared to the '60s through the '80s, and returning us back to the mid-century, I interpret this as having something to do with males competing for females less based on looks and sexuality, and more based on providing resources and emotional support.

So, when choosing boyfriends, they may have a similar picture of "dreamy dude" in their mind, but are ignoring those traits more and giving greater weight to how much providing and supporting he'll deliver. Also, if she is more intent on a long-term monogamous relationship, she'll be less willing to let him wander around with long hair, in the same way that married men prefer that their wives not leave the house with flowing locks that might attract the attention of strange men.

A more recent trend shows that this applies even to the tiny minority of men who still do have long hair -- namely, wearing it up in a bun. An NYT article earlier this year noted some examples, including this picture: 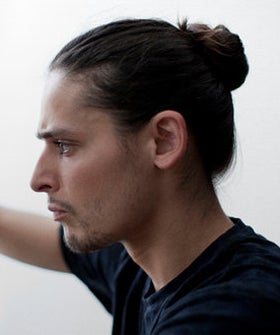 That set off lots of posts from the internet peanut gallery, mostly blaming the NYT for posting another "fake trend" article based on a handful of examples. But here is an even earlier post from late 2010 by some girl who documents the trend with celebrity examples, and most of the commenters agreeing that they look hotter with the bun than with it totally down.

I've kept an informal lookout around here, and I too notice very few of the long-haired guys actually wearing it down, and a good fraction of them wearing a bun (usually lower on the head than in the picture above).

I'm guilty of that as well, though. When I started a couple weeks ago, I thought up the expected rationalizations -- it'll have to be that way to avoid the summer heat, girls tell me I should keep hair away from my face to show my "good bone structure," I won't have it blowing in my face while walking around, etc. But then I thought that my counterpart just 20 years ago would have looked like he was trying out for a part in The Lost Boys, even though they had hot summers, windy weather, and bone structure to worry about back then too.

You only have so much wiggle room within contemporary norms, and outside of that you risk getting thrown out. For ideological and artistic stuff, I could care less about staying within the bounds of our airheaded zeitgeist. Personal appearance isn't so fundamental to our identity, though, so I'm willing to concede more ground there. Besides, when the tide does eventually turn, it'll be easier to let your hair down out of a bun than to grow it out long from nothing.