Liberal women are more likely to be bar-hounds

No real surprise, but the General Social Survey shows that the more conservative a woman is, the more likely she is to never go to bars (Spearman's rank correlation is +0.96, two-tailed p = 0.018). 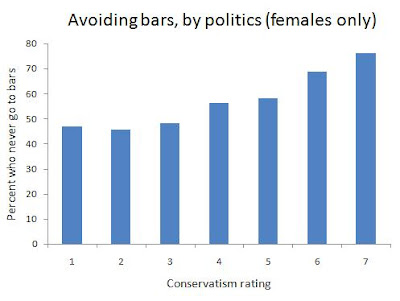 On the liberal side, a majority of women go to bars, while only a minority of fence-sitting and conservative women do. This backs up the conventional wisdom that if you want a long-term girlfriend or wife, you'd better look some place other than the nightclub scene. Either that, or invest in a liberal woman and suffer the consequences, like getting cheated on. It also supports the conventional wisdom that scoping for flings works best in bars and dance clubs.