Some numbnuts over at Roissy's claimed that better looking women were more likely to cheat than uglies because they have more guys offering themselves to her. But women are not men: merely being offered a cornucopia of cock doesn't mean she'll consume it. So let's turn to the General Social Survey and see what's up.

They don't have a variable that measures how attractive a person is, but they do record the interviewer's impression of the person's weight. For women, this is closely tied to attractiveness, thin women looking better than seacows. A priori, we expect the moo-moos to cheat more than the lithe-bodied due to having poorer impulse control when tempted. Sure enough, fat women treat dick as a fifth food group: 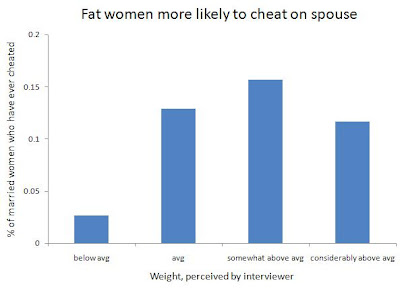 Now, this subjective rating of weight is based on the population average, and since they're all Americans, the categories are really: thin, fat, obese, and morbidly obese. There is a clear split between thin women and the various types of fat women, so I pooled all of the fatties together. Here is the contingency table for cheating by weight class:

Obviously thin women are much less likely to cheat than fat women -- 2.6% vs. 13.6%, resp. A Fisher's Exact Test shows that if there were no difference in cheating between weight groups, the chance of finding a result at least as extreme as this one is p = 0.003.

Yet another reason for men not to settle!