Are rock stars getting older?

Over two years ago, Steve Sailer wondered whether new rock stars are older today. The trouble with investigating this is defining who counts as rock stars, and when to measure their age. Otherwise, whatever you think, you'll probably end up cherry-picking examples to support your hunch. For example, in his look at young-20s punk rockers, he left out Joey Ramone, who was nearly 25 when their first album came out, and 26 when Rocket to Russia came out. David Byrne was 28 when Remain in Light came out, and Debbie Harry was 33 when Parallel Lines came out.

Using the age at their debut album won't work because they might not be famous until three albums later. To be a bit more precise, I've done the following to measure the age of rock stars in a given year: Look at who was #1 on the Billboard Modern Rock chart for every week, and see how old the lead singer was. If someone shows up more than once, just count it as the age when they first appeared on the charts that year. Then take the average of every lead singer's age, weighted by how frequently they showed up on the charts that year. (If someone showed up for 30 weeks, and someone else for 1, the former's age should count more.)

Unfortunately, the Modern Rock Tracks only go back to 1988. The Mainstream Rock charts go back to 1981, but I figured I'd start with an easier task first. The 1988 point is iffy since there were only 16 weeks in the first year. At any rate, here is the graph: 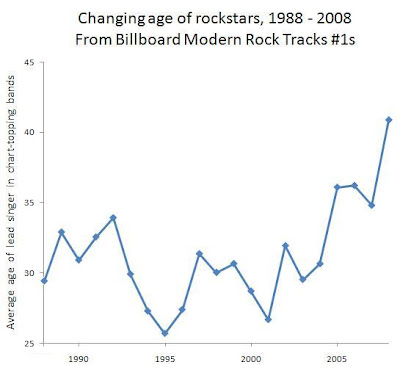 Other than noting a decline in the early-mid '90s and an increase since 2001, there doesn't seem to be much of a pattern here. I've only counted those who had a #1 hit, so I'm missing everyone else. If there were a free way to access Billboard's data, I'd look at the top 50 or something. This might also get around artificially lumping everyone into a year, since some bands spanned two years. Taking the average of the top 50 or 100 lead singers for a given week, and then plotting each week instead of year, might give a clearer picture. But then I'd also have to look up a shitload of people's ages, rather than whoever was #1. It could probably be done, but I'd need to find a good database with rock stars' basic info.

Remember not to compare particular ages from earlier times with those in the graph above -- unless they're gotten by the same method, a comparison is pointless. Also don't forget that the ages may not increase or decrease steadily -- the graph above shows something like oscillation with nearly 10 years in age separating highs from lows, spanning only a decade's worth of rock stars. Maybe they really were younger in the first wave of punk rock -- but they may have gotten older in the meantime, then younger in the mid-'90s, then older again.