After noting below that female promiscuity peaks at 22, we predict that they're more likely to cheat than other age groups. The General Social Survey asks if people have ever cheated on their spouse. Looking at unmarried males and females by age, who I've pooled into 3-year age groups, here is the percent who have ever cheated: 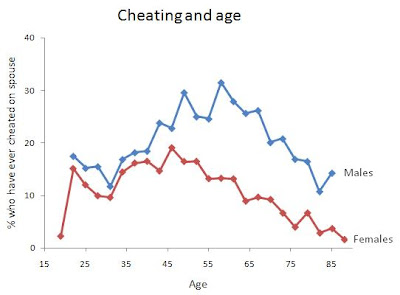 If women had only one spouse during their lifetime, then the percent who have "ever" cheated cannot decrease with age. This question was asked from 1991 to 2006, so the ups and downs are probably not a cohort effect. My guess is that people simply don't recall every single time they've cheated over their lifetimes, and "ever cheated" to them means "have recently cheated." Or again, it could reflect women who are married a second time being more likely to cheat.

Again we see that 22 year-old women are the least reliable among those who have any looks at all. The 18 - 20 year-olds, by contrast, are remarkably faithful. The ideal seems to be dating a girl who's 16 or 17, marrying her by 20, and getting her pregnant soon thereafter, so that she'll be too occupied with family life to run around in her early 20s.