An earlier post on the large role of crossover voters showed that they have swung several elections away from the winner of the race among partisans only. We're ready for another spike in crossover voting, as independents are tired of the Democrats and are ready to put the other party in power. Converting formerly reliable Democrat voters into Trump voters is part of a greater re-alignment.

I still don't see that leading to a landslide -- meaning 350 or 400 or more in the Electoral College. Some states will be stubbornly resisting re-alignment, and there isn't a large third party vote that will steal primarily from the Democrats, so we can rule out the states needed to carry a true landslide -- California, New York, Illinois, etc.

Others are convinced that a landslide is coming, on the basis of infrequent voters coming out of the woodwork, and in all sorts of states. I've already addressed the basic flaws of the "monster vote" model in this post. To reiterate: you can't project primary turnout into general turnout, using the same multiplier across the years. The likely outcome of the popular vote is a close or clear win for Trump, but not a landslide.

To alleviate some fears about what happens if no monster vote shows up, let's take a look back and see if such a massive turnout of infrequent voters was even necessary in other recent landslides.

The data are from the General Social Survey (going back to 1972), and unlike most data, allow us to study whether a person voted in two consecutive elections, and if so, who they voted for. This is a national probability sample, and the gold standard in social science research.

How rarely does someone have to vote in order to qualify as "coming out of the woodwork"? Well, they have to at least have skipped the previous election. If you want a more restrictive cut-off, their role will be even smaller than what is presented here.

First, how common were infrequent voters in the overall electorate? The graph below shows what percent of voters had not voted in the previous election: 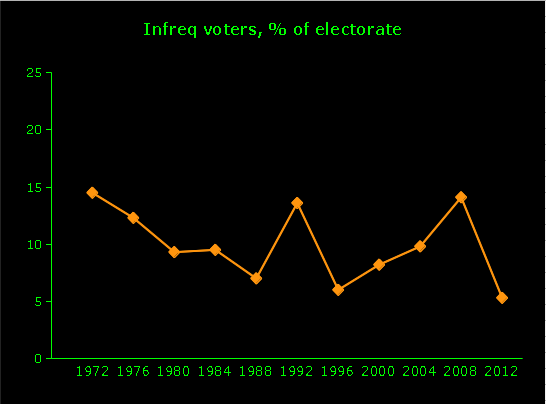 There are three clear peaks in 1972, 1992, and 2008 -- which makes it seem like a cycle with roughly 4 to 5 elections in between peaks. If that is true, then we will not see another peak in 2016, only 2 elections after the most recent peak. But it will be higher than the low in 2012, somewhere between 10-15%, probably on the lower side. The peaks themselves have all maxed out at 15% of the electorate.

It's possible that the present will break the mold of the past -- say, 20-25% of all voters having sat out the last election. But we ought to have seen signs of that by now. There should be tens of millions of newly registered voters who can be predicted to vote Trump, but there are not. 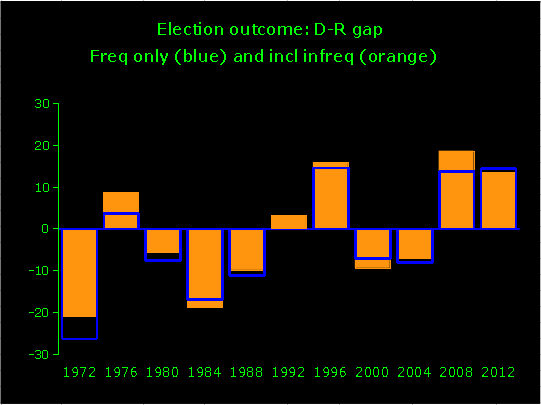 Notice that no election was switched from a clear win for one party among frequent voters to the other party winning once the infrequents showed up. The orange and blue boxes for each year lie on the same side of the axis. That's despite the three peaks where their influence ought to have been more visible.

In the 1972 peak, the infrequents actually stole about 5 points from Nixon's margin, and he still won in a landslide.

In the 2008 peak, the infrequents added to Obama's margin, but not by much and were not necessary to blow out McCain.

There is one year, however, where the infrequents broke a tie among frequent voters -- 1992, one of the peaks, where they gave Bill Clinton a narrow win in the two-party popular vote. In the post on crossover voters, we saw that the partisan voters in '92 gave a decisive win to Bush, but that the crossovers put it into a tie.

So Clinton winning in '92 relied on two bankshots -- not so surprising since he had to unseat an incumbent, and after decades of losses for Democrats (Carter's one-term win in '76 was one of the closest ever). Both of these feats might not be so miraculous, given that it was the turning point for the culture war era, and he was clearly on the liberal side that would govern for most of the period.

Worth noting: the infrequents in 1980 reduced Reagan's margin. This shows that the only first-term landslide under consideration did not rely on the monster vote, but as shown in the last post, on the massive crossover vote -- the Reagan Democrats, not the Reagan First Timers.

To summarize, the infrequent voters are generally a smaller share of the electorate than the crossover voters (except in some 2nd-term elections when crossovers are taking a breather), and their effect on the outcome has been far less important. Focus less on them to predict the outcome.

As for 2016, all signs point to Trump doing better in the crossover race than in the partisan race, and better among infrequents than among frequents. He's going to win based on winning over the "voters who didn't vote for your party last time".

There is one other group of unusual voters -- those who were too young to vote last time -- but they play no role at all, and are mostly like the infrequent voters. We'll take a quick look at them over the weekend just for the sake of completeness.