Here is primary and general turnout (in millions) since the 50-state primaries became the norm in 1976: 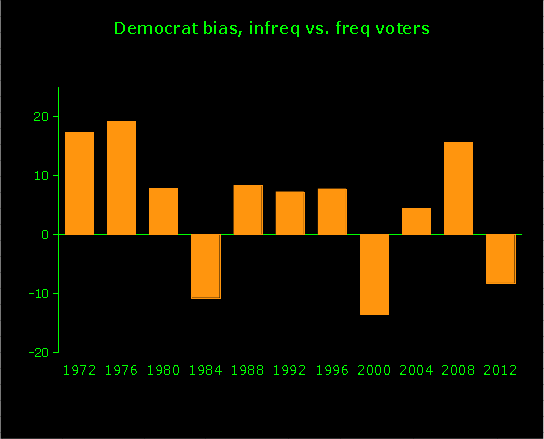 What about crossover voters? Their bias, compared to partisan voters, looks highly similar to the infrequents compared to frequents. But in 1980, the crossovers voted more Republican, while the infrequents voted more Democrat. So the party with larger primary turnout almost predicts which direction the crossover voters will head, although not perfectly. Still, it's a strong relationship, and the prediction this time is that crossovers will favor the Republican more than the partisan voters will.

We've already come to these predictions after looking at the history of crossover and infrequent voters in the general election. But now we have another source of confirmation -- the outcomes of the primaries.

Clearly Clinton will win among partisan voters since Obama beat Romney, and Democrat affiliation is higher than it is for Republican. But with substantial crossover (the main effect) as well as a minor boost from infrequent voters, Trump is set to win in the overall electorate.