Crossover voters transform elections: Their turnout and impact, 1972 to 2012

An earlier post discussed the false assumptions of the "monster vote" model, which expects tens of millions of Republican voters who haven't voted in a long time or ever. That put into question whether or not 2016 can be a landslide election.

But are infrequent voters the only source of a landslide? I decided to look into the composition of the electorate going back as far as the data allows, 1972, to see who the crucial groups were in the landslide elections. The data come from the national probability sample in the General Social Survey, which allows us to study the voting behavior of the same person across two elections.

Infrequent voters have not mattered except in close elections, and often their effect goes against the landslide winner. But we'll get to those infrequent voters in another post.

The group that has the largest effect of up-ending the status quo is not an underground army of infrequent voters who swoop in like a deus ex machina, but frequent voters who decide to change sides from who they voted for last time. Although we do live in polarized partisan times, it's a mistake to dismiss the effect of those who do not simply vote for the same party every single time. 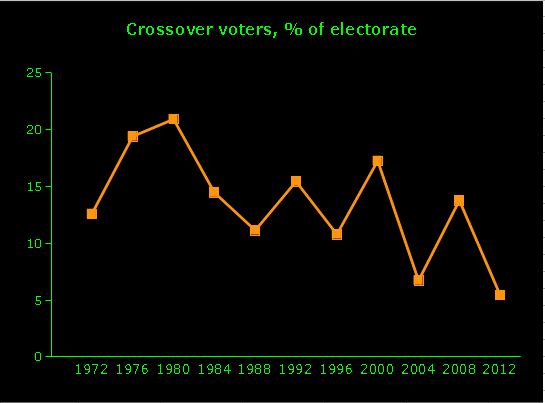 There is a clear decline over time in the willingness to switch your party -- a sign of the well-attested rise in partisanship since the 1980s. About 20% of all voters in 1980 were crossovers, and it's become hard to break 15% since then.

Still, there is a clear cycle around that trend, roughly showing when the voters wanted to dump the incumbent and change the guard. Usually when there's a new party, the voters give it a chance and don't cross over so much when it's up for re-election. When the party has had two terms, then they'll cross over again and change which party is in office.

Ousting a one-term party shows up in the consecutive rise in crossovers from 1976 to 1980. First they wanted to be done with the Nixon administration, crossing over to elect Carter. But then he turned out to be a terrible replacement, so they crossed over even more in 1980 to elect Reagan.

Conversely, voters were fine with the Republicans staying in power during the '80s and crossed over less and less.

Although Bush lost the popular vote in 2000, the spike in crossover voters may show how he won back the Electoral College, through converting many voters who voted for Clinton in the South and Appalachia.

The cycle sure looks like it's about to swing back up again in 2016, as the non-partisans seem to have had enough of the Obama years, especially when they would have to choose Crooked Hillary as their third-term Democrat President. If this year is operating under the same constraints as there have been since the polarizing '80s, the crossover vote will be between 10-15% of the electorate, probably on the higher side. Without the non-partisan climate that prevailed before the '80s, we probably won't see 20% or higher.

How great of an effect have the crossovers had? In other words, how would the election have turned out if you were only allowed to vote for the same party as last time -- and if you wanted to cross over, you stayed home?

That scenario, where only partisans vote, is shown by the blue boxes in the graph below (positive values show a win for the Democrat, negative values a win for the Republican). By allowing people to cross over, as well as stick with the same party, the outcome is shown in orange. These are the outcomes among frequent voters only, but the infrequent voters have not decided any election other than 1992. 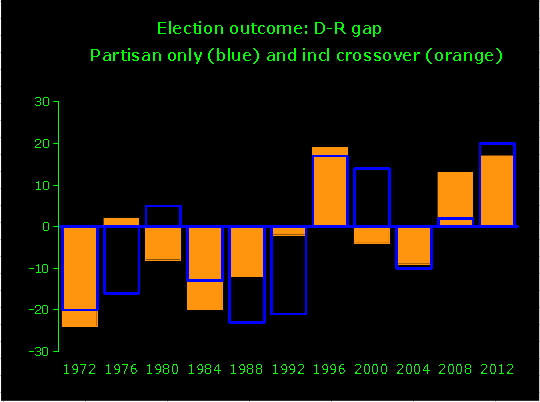 Of the 11 elections, 3 have been transformed from one party winning to the other -- shown by the blue and the orange results lying on opposite sides of the axis -- one was reduced from a solid win to a tie, and another tipped from a tie to a solid win.

In 1976, voters who went Nixon-Ford were a lot more common than those who went McGovern-Carter, not only because there weren't many McGovern voters to begin with, but because it was a more natural fit to vote for Nixon and his VP, whereas McGovern was a leftist and Carter a deregulating born-again Southerner. However, his non-leftist stance allowed Carter to draw a large number of former Nixon voters. Given the high rate of crossovers (from the first graph), it was enough to change the outcome from a win for Ford among partisans, to a narrow win for Carter overall.

In 1980, the partisan race was won by Carter because it was more natural to vote Carter twice than to vote Ford and then Reagan, who were from very different wings of the Republican Party (liberal/moderate vs. conservative), and who had faced off in the primaries of the previous election. However, the widespread disappointment with the Democrat -- "Anybody But Carter" -- led to a surge in crossover voting (first graph). That was enough to change the overall election toward Reagan's victory.

These are the famous Reagan Democrats, and that is what won him the election, and in a landslide -- not voters who had not shown up in earlier elections.

In 2000, partisan Democrats outnumbered partisan Republicans because there was positive momentum for the Democrats (who did win the popular vote a third time in a row), and because Gore was Clinton's VP -- a natural progression to follow. But Bush drew a large number of former Clinton voters, primarily in states with counties in Appalachia and in the lower Mississippi region. Perhaps they felt like eight years in the White House had turned Gore into an elitist Eastern liberal (despite hailing from Tennessee), while Bush had a more folksy Southern-ish appeal.

Only by reclaiming these Clinton voters from the Greater South did Bush manage to turn around the Electoral College.

In 1992, a similar dynamic played out as in '76. Among partisans, it was natural to go Bush-Bush than it was to switch from a typical Northeastern liberal like Dukakis to a Southern pro-business moderate like Clinton. Not to mention there were many more Bush '88 voters than Dukakis '88 voters. This gave Bush a decisive win among the partisans. However, like Carter, Clinton appealed to Republicans who were Southern, socially and culturally moderate or conservative, and who wanted a more pro-business than tax-and-spend economic approach.

In 2008, the dynamic was the opposite, with the partisan race more or less tied. Going Bush-McCain was natural as both were neo-cons, Kerry-Obama was too since both were Anybody But Neo-cons, and the size of Bush and Kerry voters were similar the last time. What made this election such a blowout was the crossover from Bush '04 to Obama '08. If you voted in both elections and chose Bush in '04, you had a 25% chance of defecting to Obama, and among Obama voters, Bush '04 voters made up 25% of his coalition (these don't have to be the same number).

Why didn't the Bush voters who defected to Obama choose Kerry in the first place? They might not have thought the Iraq War, the housing bubble, and so on, had been going so badly by '04. But with another four years of neo-con disaster, they could no longer in good conscience vote for McCain and went with Obama by default.

They are the weakest element of his coalition, and will mostly be voting Trump this time -- they wanted a Republican who was against neo-conservatism and Wall Street bailouts, and settled for Obama. And they are a very large chunk of the Obama coalition, at 25%, meaning their return to the Republican Party will be a profound disruption to the so-called "blue wall" of safe Democrat states, even if "only" a majority and not all of them migrate back to red.

The countervailing movement will be the tiny handful of hardcore neo-cons who will defect to Clinton, who never met a war she didn't like, and the somewhat larger number of Joe Scarborough yuppies who feel like supporting a populist would kill their attempts to climb higher up the status pyramid.

This election will not be decided by an outpouring of folks who rarely vote, but by those who have voted recently and are tired of where the Obama administration has taken things -- particularly those back East, outside of the Sun Belt where all the trendy people have been moving to. In the Great Lakes, Mid-Atlantic, and New England, masses of left-behind voters are up for a change of pace, even a radical one. Things have been going the wrong way for so long, that's what it's going to take.