No convention bump for Hillary's alienating and irrelevant campaign

During the most tone-deaf major campaign ever run, it comes as no surprise to see that Hillary's polls are flat or declining, even as her convention has taken over the mass media.

According to tracking polls from both Reuters and USC / LA Times, Trump's convention boost had begun the weekend before the event was even gaveled in. After its end, his numbers are holding still or increasing, rather than it being a fluke.

The "history-making" coronation of Clinton, on the other hand, has only seen a slowing in her rate of descent -- still falling, but not in free-fall as she was last week. But there are still two more days for her to alienate and anger normal Americans, so let's not count out another precipitous drop after her big speech.

Here are the Reuters and USC graphs (Reuters always underestimates Trump's true standing, but the trend is still clear). 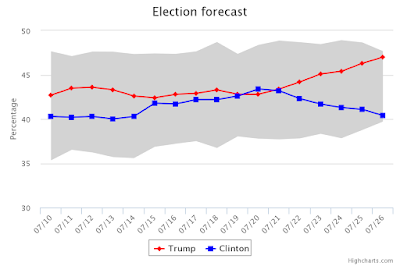 How much cash do you think Team Hillary has been pouring into her convention, compared to Trump's? And yet what does she have to show for it? Still sagging polls. Turns out that having an order of magnitude "advantage" in spending money and employing staff doesn't mean jack squat if it's all pointed in the wrong direction.

I really, really hope that her big speech is a 50-minute version of her nerve-grating commercial about "How will innocent Mexican kindergarteners FEEL when they hear President Trump say that Mexican rapists and drug dealers are invading our country?" There could not be a more tone-deaf and mawkish harangue of ordinary Americans on behalf of America-corroding forces.