Driving other people's new cars, or riding in rental cars nowadays makes me feel claustrophobic, like I'm wearing a ski mask with tiny slits to see out of. It's disorienting and probably dangerous to be driving around so unaware of your surroundings. Thankfully folks these days are less risk-taking and drive more safely otherwise -- no more joyriding, no more belt-free cruising around -- or else we'd be seeing a lot higher accident rates from typical cars having the blind spots of a tank.

As usual, I have an unusual take on this change, from taking a longer-term perspective and from thinking primarily in terms of rising-crime vs. falling-crime or cocooning vs. outgoing periods. It's not a utilitarian thing to make the car perform better, since car designs show pendulum swings between greater and lesser visibility, but not for wanting the car to perform well or perform poorly. It's as though people have an aesthetic, social, or cultural goal in mind for their ideal car, and hope that it does a good enough of a job getting the passengers from point A to point B, within those constraints.

Why would people crave limited visibility? There must be some other non-utilitarian benefit that they're trading off against the greater danger of impaired sightlines.

Well, socially avoidant people do not want to feel too closely connected to, or even open to (vulnerable to) other people. Restricting the visibility keeps the outside world out of sight and out of mind. And symmetrically, it keeps the prying eyes of strangers from invading the privacy of the passengers. When no one's eyes can penetrate into the car's interior, it feels more like a cocoon. In both ways, limiting visibility achieves the goal of social insulation on those occasions when you're forced to travel away from the private security of your domestic sphere.

The fact that people tint their windows a lot more during the past 20 years than back in the '80s suggests that drivers and passengers are more concerned about outsiders seeing inside than vice versa. They haven't adopted a design that serves only to limit visibility from the inside looking out. They still seem to want to remain oblivious of their surroundings, but they also recognize that this puts them in greater danger while driving. So I'd say the main factor is the fear of exposure in public, more than the avoidant attitude toward seeing or connecting to others.

Sure, cars marketed to elite audiences may want limited visibility to advertise their privacy and suggest exclusivity -- no pictures, please. However, we're not talking about the playthings of the paparazzi-plagued elite, but the daily drivers of the masses. No one's trying to take their picture, so the design reflects an asocial awkwardness, or perhaps anti-social paranoia.

We don't need to bother with hypotheses about wanting to shield oneself from racial diversity or poor scum living nearby. It's just part of the society-wide shift toward cocooning, and indeed these trends seem most pronounced in the Soccer Mom-mobiles found in affluent, lily-white suburbs.

When people want to be more connected to the world around them -- the people as well as the environment -- they want greater visibility. This lets them be mindful of others while looking out, and it shows that they're comfortable with outsiders looking in on the passengers. It makes the car feel like less of a moving fortress, and thus reflects the high levels of trust in the society. High trust is also reflected also by the higher rates of hitch-hiking, which fall to nothing when the would-be participants don't trust each other.

There may be more to it, but from experience it seems like the two main offending design elements these days are the microscopic rear window and the bulky "pillars" that support the roof on either side of the windshield and rear window, especially the latter. Pillars in the middle of the car are pretty damn bulky too. Aside from thickness, pillars that are more slanted create worse blind spots, while more vertical ones lessen the problem. The tops of the door panels appear to be higher up and closer to the roof on the cocooning cars, narrowing the height of the side windows relative to the overall height of the car.

These are pretty objective features to look at when comparing designs from across the history of automobiles.

In a previous post on the cycles in car design reflecting the rising-crime vs. falling-crime cycle, I looked more at the overall shape. Rising-crime periods show more thrill-seeking and dating-and-mating displays. The cars from those periods look narrow and sleek. In falling-crime times, people come to emphasize safety over everything else, and aren't particularly showy during courtship. Their cars look bulkier, boxier, and bubblier.

I haven't rounded up as many pictures for this post as I did for the previous one, but the cycles appear to be the same again. Cars have far more limited visibility during the mid-century (mid-'30s through the late '50s) and Millennial era (mid-'90s through present). During the New Wave Age, cars have almost panoramic sightlines, and they look pretty open from the first models through the early '30s -- admittedly not so much in the rear, but they appear to be about as open as they could have been within the constraint of not having an extended trunk, and having the rear window right above the back seat. And a lot of early cars didn't have rear-view mirrors to see through the rear window anyway.

The design choices that lead to impaired visibility of cocooning cars also gives them a more aerodynamic shape (a more horizontally slanted windshield, and slanted pillars to go with it), probably the main thing that comes to mind when you think of mid-century or 21st-century cars. This allows the drivers to rationalize their choices as reflecting a desire for bullet-like travel -- when, again, the reality is that people in those periods take smaller risks, seek fewer thrills, and generally play it safe.

When drivers truly feel the need for speed, they drive somewhat less aerodynamic cars that have more vertical windshields. It seems counter-intuitive, but then you don't need the most aerodynamic car to drag race or go out for a joyride. I'm sure the speed demons of rising-crime times would love for their ride to also have a more aerodynamic shape, but social connections matter more in those times, so greater visibility trumps smoother sailing.

To keep the comparisons across time periods as close as possible, I've chosen pictures of similar types of cars. I'm also showing pictures only to compare the '60s-'80s vs. the '90s-present, to save time and get this post out. I'll scrape together some pictures to compare 1900-early '30s vs. mid-century cars later.

First, a Jeep Wagoneer from the '80s vs. a Kia Sportage from the 2010s. No paranoia among parents who used to chauffeur their kids around back then. Check out how thin the pillars are on the Wagoneer, how large all the windows are, and how high the roof rises above the top of the hood / top of the door panels / top of the trunk panel. It looks see-through compared to the Sportage with its slit-only sightlines. 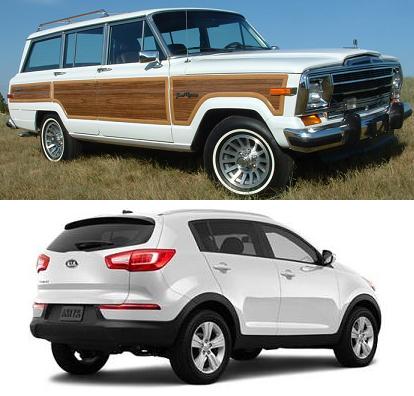 Next, a Ford F-series truck from the '70s vs. its descendant today. Notice how much higher up the top of the bed and door panels are on the new one, shrinking the side and rear windows. 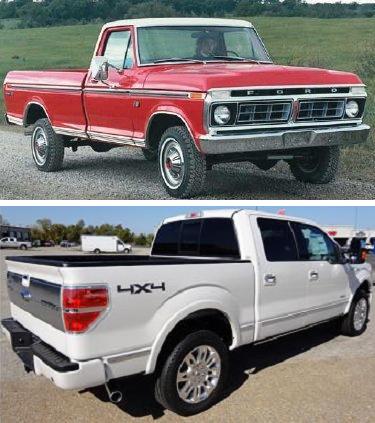 A Toyota Celica from the '80s vs. a Chevy Cruze from today. The Celica had a bit thicker pillars in the middle and rear section than other cars of its time, but it sported bigass windows to make up for it. 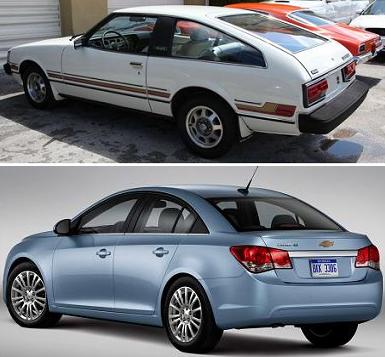 Now a Camaro from the '60s vs. a Challenger from today. The Camaro's rear pillars are somewhat thick, but things were just starting to move away from the mid-century cocooning norm. And in any case, they're nowhere near as obese as the ones on the new Challenger, which also has a dinky rear window. 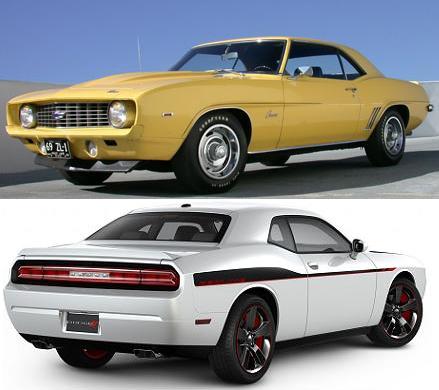 A Mazda RX-7 from the '80s vs. a Nissan 350Z from the 21st century. The rear window on the RX-7 appears to wrap around the sides, and the side windows are nice space-filling rectangles, not closed-in half-circles. The tops of the door panels on the 350Z are so close to the roof that they look like the 8-foot privacy fences that have shot up around houses everywhere in the past 20 years. 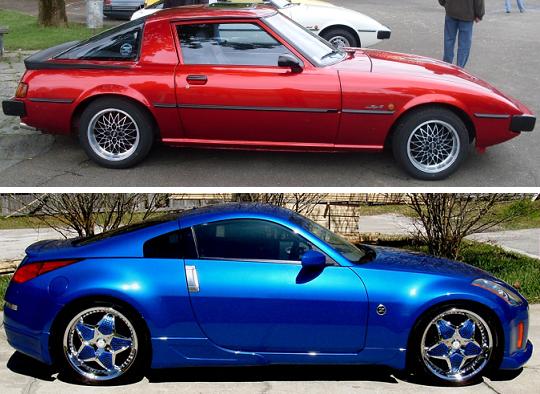 Finally, a Volkswagen Golf from the '80s vs. its descendant today. It's so much easier to see through the earlier one, with its high windows and thin pillars. The new one might as well have Do Not Disturb signs plastered on the windows. 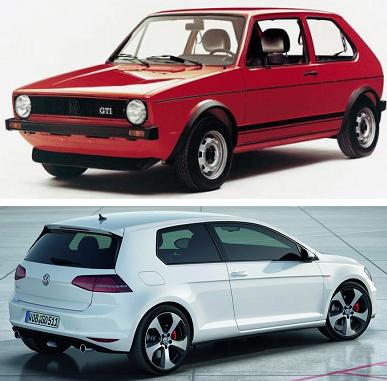 Today's cars, no matter what the exact style or who they're catering to, are about as inviting as a giant pair of sunglasses.