Children not enculturated to know their nursery rhymes anymore

Some thoughts in the previous post, about contemporary children's lack of familiarity with their folk's culture, reminded me of some baby pictures I found at home recently, showing me engrossed in a book of nursery rhymes. This is Philadelphia, around 1982 or '83, when I'm about 2 years old: 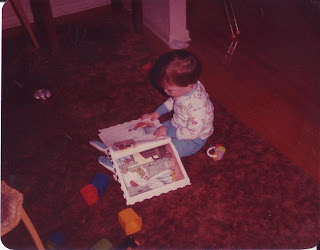 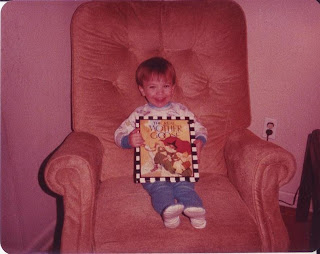 The left page shows the drawing for "The Bunch of Blue Ribbons" ("Oh, dear, what can the matter be?"), and the right page shows "Hot Cross Buns" at the top, and "Bobby Shaftoe" at the bottom. Here is an online copy of the book, including the pictures that must be in the public domain by now. The original book came out in 1916, during the "golden age of illustration" of the Edwardian and Jazz Age periods.

BTW, in the early '80s Philadelphia was only 50-55% white, and 40-45% black. Yet somehow kids still learned their European nursery rhymes. Pointing to unfavorable demographics these days is usually a rationalization for not teaching children the culture of their people. "Whaddaya gonna do in this majority-minority society?" Racial demographics make little difference; it's the zeitgeist that determines whether adults want to enculturate the young generation in a certain way or not.

I actually bought that Real Mother Goose book for my nephew last year, without even realizing that it had been the one I'd grown up with. Something about it stood out from the other nursery rhyme books. It must have been an unconscious memory of the drawings, which I probably studied more than the text since I couldn't really read at that point.

Unfortunately my nephew didn't really dig it, and his mother shows little interest in passing along folk culture to her kids. She's not atypical either -- if you watch any of the many reality shows that capture family life, parents don't teach nursery rhymes or folk songs to their children, and children never sing them spontaneously. You also don't see folk games being passed on, like thumb wrestling or freeze tag among boys, or hop scotch and jump rope among girls (let alone the rhymes that go with it).

My mother used to record herself and us kids with a microphone and cassette recorder, and send the tapes to her relatives or my dad if his ship was out at sea. There's the usual stuff about what I'd done that day at preschool, what was for lunch, etc., but there was also a part where she'd begin a nursery rhyme and have me finish it, or sing along to a tune that they'd taught us in Sunday school, like "I've Got the Joy Joy Joy Joy."

She says I had most of that Real Mother Goose book memorized. Looking over all the entries, some of them have stuck more than others, but there were a lot that I wouldn't have recalled off the top of my head, but came right back when I started them. Verse makes it easier to remember, using rhyme, meter, alliteration, and other verbal ornamentation.

Parents in the Millennial era sense that those stylistic techniques make for a more group-oriented culture -- everyone can follow the beat, memorize the lyrics, and feel the same pleasure when words rhyme or show alliteration. Prose narratives do not allow the listeners or readers to synchronize themselves in the same way; what they share is the propositional content (who did what to whom, when and how), the distilled lesson or message, and emotional reactions -- but not in a synchronized way.

In periods of cocooning and suspicion of all others outside the nuclear family, it would disturb helicopter parents to see their child synchronizing himself with another child, let alone a group. It's one step closer to crowd or mob influence, and there goes all your hard work to shape him precisely the way that you want him to turn out.

When parents are not in smothering mother mode, they figure it's a fool's game to try to micro-sculpt their child, and that it's not only inevitable but important for him to become influenced by peers and belong to a larger folk culture above, beyond, and outside the nuclear family. So they're not only happy but eager to teach their kids such songs, dances, and games, so that they can hit the cultural ground running when they go off to school.

Then there's the subject matter -- some of it is pure nonsense, which children find funny, but you also get your first exposure to the topics of hardship, death, violence, love, courtship, and marriage. You're born sensing that these themes are important and need to come up in your development at some point. If they aren't, and your parents only let you watch Nickelodeon and the Disney Channel, you come away with an understanding that such things are not to be talked about, and that bringing them up is awkward.

The rapid disappearance of all of these things over the past 20 years is part of the broader trend toward the Asianization of Indo-European culture. You don't see them teaching their children folk songs, dances, and games, and encouraging them to join in such activities with the other children. Learning to read and write only serves the purpose of studying, doing well in school, and earning more money as an adult. If they want relief, they're allowed their little distractions in isolation from others (these days, TV, internet, and video games -- back in the mid-century, radio, TV, and comic books).

Their joyless, fragmented, nose-to-the-grindstone culture is not fit for us. It might work for Baltic, Slavic, and Nordic groups, but not for Celtic, Germanic, and Italic groups. Blonde Europeans may be enjoying today's revenge-of-the-nerds culture, but it leads to alienation for everyone else.