In an earlier post I put together a random bunch of family pictures from the '80s and early '90s showing how different the world has become in the past 20 years, as young people have been increasingly prevented by their parents from normal growth activities, and increasingly lost any interest on their own part in such activities. The latter seems to be children and teenagers learning that the environment they're growing up in is aimed against youth autonomy, so they come to internalize a "why bother?" attitude toward autonomy and maturity.

To give a better idea of how early the socialization process used to begin, I went through the old shoeboxes again and found some snapshots of what life in the infant stage was like not so long ago. The setting is some kind of daycare place on a naval base in San Diego, 1981, where the new mothers around the base would meet up to socialize with one another, and to get their infant children started early in the long socialization process. Looks like we're all around 6 months old -- old enough to crawl, and at least in parents' minds back then, old enough to get to know new people, both peers and unrelated adults.

You may have to click to enlarge in order to see some of the facial expressions. 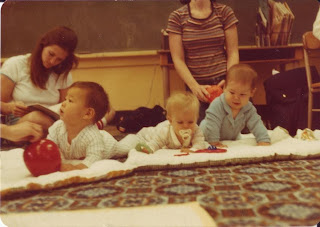 Woah, three infants playing with each other, and all with no parental interference. In fact, check out the mom in the back wearing the '80s gym socks, focusing on her book and leaving her baby to FEND FOR ITSELF. Actually, she might have been a guest speaker since she doesn't show up in the other pictures, let alone with a child of her own.

You can't expect advanced social skills at such an early age, but it's more to just get them comfortable being physically around their peers and interacting with them. Delay that for too long, and it's too late -- they're socially awkward for life, like most Millennials. The left baby is looking up at their mother, and the middle one is lost in their own world, but at least the right one is attending to the middle one. That's more other-mindedness than you would see among adolescent and young-adult Millennials today, where they're all staring down at their own separate devices. It would be very rare for one of them in a group of three to be giving the look to the less social two, like, "Hey c'mon, let's do something fun already." 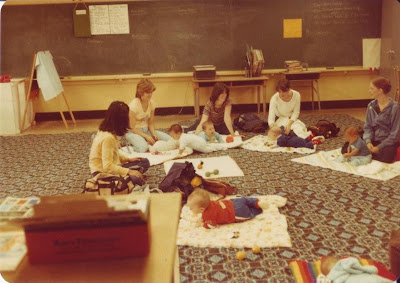 Another shot showing how hands-off the mothers are around the group of three playing near each other. No way that today the mother on the left would allow her baby to wander off of their blanket and play so close to two total stranger babies and their stranger mothers. She'd swoop in all embarrassed and apologetic for allowing her baby to disturb the cocoon of another nuclear family unit. "Oh, I'm so sorry for interrupting you guys -- you know how kids can just sneak away like that!" 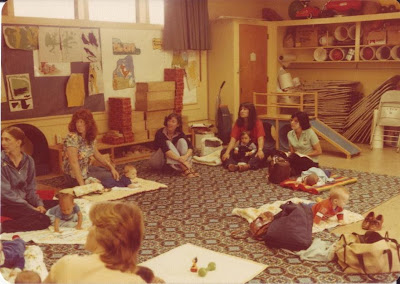 There must have been a guest speaker for a brief moment, as none of the other pictures show them all focusing on the same point. Notice how even when their attention is directed elsewhere, they don't feel the need to grip on tight to their babies. That'll only encourage skirt-clinging throughout life. But they're not cold and aloof either, just letting us be ourselves. That's me on the right in the red shirt, while my mother was taking the pictures. 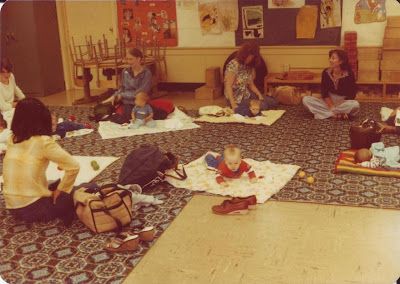 The woman on the right doesn't have a kid with her. When I asked about who these women were, my mother didn't point her out as the teacher or leader or anything like that, so I'm guessing she was a mother who didn't bring her kid that day. Maybe it was sick, staying with a visiting relative, or had grown too old, or had not been born yet. Whatever the reason, she still wanted to show up to socialize with the other mothers, who were glad to have her around.

After we were old enough to crawl and walk around on the playground, the mothers turned us loose and sat in their own grown-up area to socialize with one another, while we interacted in our own little world. A major source of the "frazzled mother" syndrome of the '90s and 21st century is the social isolation of adults from one another. You'd go crazy, too, if you were that isolated.

Back in the '80s, it was common for nearly a dozen mothers to hang out with each other for several hours every day. These pictures are not of a one-off gathering. That kind of support and connectedness prevents overblown anxiety from building up in the first place. Aside from that, they got lots of feedback from the environment about whether what they were doing was right or wrong, harmful or not, and so on.

When you're isolated, you have no clue what the effect of your parenting is because you have no variation to pick out a correlation from. (Other than conducting your own experiments, but most mothers are afraid to experiment too much.) When you're part of a group where N = 12, you can put things in perspective. Like, "Oh, I guess it doesn't matter if I do X in order to achieve Y, since everyone else here isn't doing X, or maybe is doing the opposite of X, and still achieving Y." Or if you're wracked with self-doubt about "Can I be the only one who...?" -- you'll find out right away based on how the others in the group act. Maybe you are the only nutty mother who does X, but at least you'll know for certain and not be unsettled by nagging doubts anymore.

As a result, notice how normal the women's facial expressions are in these pictures -- not lit up with fake excitement, not paralyzed by stress and anxiety, and not concealing the stress with a nervous "don't judge me, I'm really not a horrible mother" kind of smile. Often the women are looking not at their own child but someone else's -- and not in that envious way, like "Oh, so that supermom and her super-baby think they're going to make the rest of us look stupid and feel bad, are they? Fucking bitch." Folks back then were just genuinely curious about other people, no matter what age.

Also notice how non-competitive they are with their possessions. There's no designer diaper bags, no baby yoga mats, no "baby genius" toys, no mini-sized adult clothing (leggings, jeans, cargo shorts, etc.), and no "mommy's still got it" clothing. Everyone's stuff looks like it could have come from the Goodwill store because folks weren't so hung up on materialism in the '80s (one of the most vile lies about the era). And you'd never see that carpet pattern or color scheme in today's design-conscious daycare centers. Back then, it had a decent pattern and didn't call attention to itself, so why bother hiring a design consultant for carpeting at a daycare?

Inequality had been increasing since the mid-'70s, but you couldn't tell from looking. You were somewhat aware that the rich were getting richer, and that the little guy was having a tougher time making ends meet, but ostentation as part of a larger competition was pretty subdued in the '80s. Glamour and excess were more pro-social, part of the carnival atmosphere. Pitch in with your fair part to spread the good cheer all around -- not to rub it in someone else's face that you can afford X, and they can only afford Y.

The previous era of frazzled mothers and culture wars over the role of mothers in society was the mid-century, when inequality was low and falling, the opposite of the Millennial-era pattern of frazzled mothers and rising inequality. So, inequality is unrelated to competitiveness among mothers, or among women with vs. without children. It's related more to the cocooning vs. outgoing cycle that mostly lies on top of the rising-crime vs. falling-crime cycle. It's not keeping up with the Joneses, but social isolation and suspicion of non-nuclear outsiders that locks mothers into a domestic prison of constant self-doubt, anxiety, smothering parenting, listlessness, and OCD routines as an attempt to give more purpose to their lives.