Celto-Germanic accomplishment, with speculations on the Mediterranean and Middle East

The matter of national character is under-appreciated in America, where we think in larger racial terms of whites vs. blacks, whites vs. the Indians, and so on. Likewise, the defenders of a group called "Dead White European Males" contrast their heroes with contempo multi-culti women and queers. These broad-brush conceptions obscure much of the true evolution of our culture, namely the "who" and "where" in the European context.

In Human Accomplishment, Charles Murray quantifies the eminence of people he calls "significant figures" in the arts and sciences, for both Europe and Asia. This is measured by their share in subject-specific encyclopedias across a variety of languages. Michelangelo and Shakespeare receive lots of space in any language's encyclopedias on art and literature, so they rank very highly. More marginal figures may not make the final cut.

Taking stock of all the significant figures from Europe after the Middle Ages, where did they come from? I couldn't find a reproduction of his map on page 297, but here is the description:

If we ignore national borders and instead create the most compact polygon (in terms of land area) that encloses 80 percent of the places where the significant figures grew up, it forms the shape in the figure below [not shown here], with borders defined by Naples, Marseilles, the western border of Dorset County in England, a point a few miles above Glasgow, the northern tip of Denmark, and a point a few miles east of the city that used to be Breslau in German Silesia (now Wroclaw in Poland).

[...] All of the Netherlands is still in... Parts of Britain, France, Germany, and Italy are still in. Russia is out. Or you can think of it another way: 80 percent of all the European significant figures can be enclosed in an area that does not include Russia, Sweden, Norway, Finland, Spain, Portugal, the Balkans, Poland, Hungary, East and West Prussia, Ireland, Wales, most of Scotland, the lower quarter of Italy, and about a third of France.


Zooming in even closer, we uncover the following map: 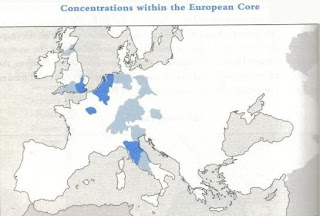 
What makes this broad area unique is its blend of peoples who come from different but complementary national character backgrounds. They combine Celtic curiosity and playfulness with Germanic diligence and orderliness. Or in the terms of evolution by natural selection, blind variation and selective retention.

Too given to imagination and rambunctious behavior, and you can't commit to the process of whittling, crafting, and putting the finishing touches on your Big Idea. Hence why the more predominantly Celtic areas do not join what Murray calls the "European core" of accomplishment. On the other hand, too obsessed with structure and nose-to-the-grindstone workaholism, and you can't let your mind wander into strange new territory to discover you Big Idea in the first place. Hence why the more purely Germanic areas fall outside of the core.

In the farther eastern parts of Europe, the Balto-Slavic people appear to lack either trait in a high proportion. On the whole, they are incurious as well as listless, not unlike the norm in, say, China. The gloomy, going-nowhere Vodka-drinkers, and the numbed-out opium den dwellers and slot-machine yankers. Adaptation to sedentary agriculture has selected for similar ways of life in both the plains of Northeastern Europe and East Asia. The lack of accomplishment in that area, too, is striking -- especially considering their political integration, social organization, and intelligence levels higher than the average in Western Europe.

Celtic people are more adapted to pastoralism, hence the playfulness and rambunctiousness seen among herder societies all over the world. Germanic people were also pastoralists, though they did begin around the Northern European Plain, and so might have also been selected for a certain degree of orderliness and industriousness if they dipped into agriculture as well as livestock herding, not to mention any such traits that they may have picked up from their Balto-Slavic neighbors (culturally or genetically), who are more exclusively sedentary crop-planters.

As for the southern regions of Europe, my completely uninvestigated hunch is that they don't show the healthy mix of pastoralist and agriculturalist personalities after the Mediterranean was eclipsed as the breadbasket, and settled farming shifted more toward the European Plain up north, leaving a more heavily pastoralist area more interested in the culture of honor. The Mediterranean's heyday seems to have been earlier, after farming had established itself, but when herding animals was still being practiced as well, as in the Greco-Roman world.

Speculating even more, I suspect that a similar dynamic accounts for the central role of Persia in the Islamic Golden Age. Naive Westerners assume that Islamic = Arab or at least Semitic, but so many of the towering figures were from Indo-European Persia. When you interact with their descendants today, Persians appear to have a familiar mix of playfulness, rambunctiousness, diligence, and orderliness. The Lebanese feel that way too.

In contrast, the Palestinians are more like the Irish of the Near East. (Purer pastoralist types, even more remote from settled civilizations, would be the tribes of Afghanistan, who are the local versions of the Balkan tribes.) I have no idea who the Middle Eastern counterparts of the rigid, martinet pure-Germanic types are. But the Fertile Crescent must have produced tribes similar to the farmers of the European Plain, especially ones like the Germanic tribes who began locally as pastoralists.

Certain modern peoples would then represent a blend of those two opposite ways of life -- agriculture and pastoralism -- and enjoy an outsized advantage when it comes to cultural production. Egypt for sure, the descendants of the agrarian Nile civilization and the desert nomads from Arabia who over-ran it. The Lebanese and Persians probably come from some fusion of Fertile Crescent farmers and pastoralist / sea-faring nomads (culturally at least, whether genetically or not).

This is another post in an off-and-on series about that urges fans of "human biodiversity" studies to take a closer look at the variety out there in the world, now and historically, and not to simplistically talk about the white or European race, Islamic culture, etc. And more importantly, to broaden their interests beyond intelligence and focus also on personality, subsistence mode, and so on. How else are we supposed to explain, for example, the state of affairs in China vs. Japan, or Russia vs. Germany? Or East Asia vs. Europe? There's way more going on than IQ.