I was checking out some pictures of old computers, and started to recall how common it was for them to have a dark background and a light-colored foreground, usually text characters but also images. This is what comes to mind when I think of the first computers we learned how to use at school (click any image for not-so-squinty resolution):

Sure looks more futuristic and computer-y than what we have these days. The dark background and brightly colored light in the shape of text and images calls to mind neon lights at night. Just more stimulating and engaging to look at, while the light background with dark text / images feels more soothing and tranquilizing -- like you feel when reading a book, browsing the newspaper, etc. More leisurely than purposeful, more receptive than active, and so on.

I wonder if this difference between stimulating vs. tranquilizing color schemes matters for how well we use computers. We ought to check people whose livelihoods depend on using them, such as coders. Here is a poll confirming my hunch, not being much of a coder myself, that they overwhelmingly prefer dark background and light-colored text. We don't need to know why, just that they do -- something about it works better.

Back in the '80s and even into the '90s somewhat, ordinary people used computers to be productive and creative, whether at work or at home. They've since changed gears, treating computers more like toy gadgets to soothe their boredom during leisure time, or distract them at work (and in public) while still at least keeping their brain online.

And sure enough, in the good old days it wasn't only the command line interface that featured a dark background and light text, but the major productivity programs of the day. They could have chosen to use a lighter background and darker text similar to today's scheme, but uniformly adopted the opposite combination. Below you see what the most widely used spreadsheet and word processing software packages looked like for the user. They are Lotus 1-2-3 and VisiCalc, and WordPerfect and Microsoft Word.

As people have come to use computers more for goofing off, the color scheme has been turned inside-out. The more I think about it, the more it does feel like the average computer experience puts your mind in a more passive and tranquilized mode, like when you're reading the newspaper for leisure.

But some people are still getting paid to use these things for productive work. Aside from all-purpose coders, there are the finance whiz kids (or wannabes, at any rate) who use the Bloomberg terminals: 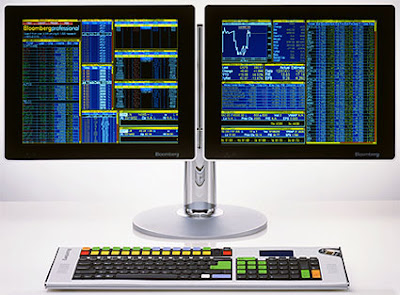 Pretty '80s looking, right down to the two-tone keyboard design, which also features a variety of bright-colored keys. If you're a quant big-shot, you need to stay awake and visually engaged. The pure desaturated Zen minimalism of the typical Apple set-up would put them to sleep.

I tried reconfiguring Word or WordPad to display a black background, but to no avail. The best you can do is get a single row to show black, not even the entire writing area, let alone the margins (which cannot be darkened). So don't blame me if my posting seems beneath my abilities -- it's this damned black-on-white composer that I have to use.