Poking around the Postal Service's Household Diary Study, I found some data on how many "holiday greeting cards" the average American household receives each year. Overwhelmingly these are Christmas cards, with Valentine's a distant second. Not all years are up on the web, but here's what is available: 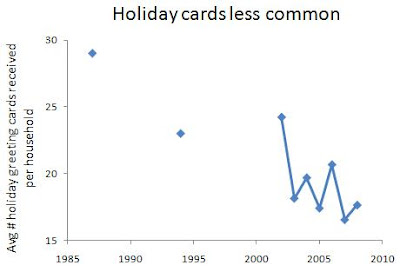 Using Lexis-Nexis, I found an estimate of 26 Christmas cards for 1990, so that the number of all holiday greeting cards would have been a bit above -- probably around the 1987 level of 29 cards across all holidays. The first big drop is visible by 1994, when the number of cards received per household was about 25% lower than in 1987. There was another drop-off starting in 2003, and during the most recent years of 2007 and 2008, the number is down about 40% from the late '80s / early '90s. This does not merely reflect the fact that there are more households now than then, which would tend to lower the ratio even if the total number of cards stayed the same. In 1987, 2.856 billion holiday greeting cards were received vs. 2.117 billion in 2007 -- a decrease in sheer volume of 736 million cards.

There were several feature journalism articles this season about how few Christmas cards people have gotten this year, but most of them traced the decline to the recession, gift cards replacing more heartfelt tokens, and of course the internet and e-cards. However, we now see that those are all wrong, given how far back the decline goes. Remember, the web was just becoming common in 1994; sending e-cards -- which still are incredibly unpopular -- had to wait for it to reach greater maturity. (The earliest use of "e-card" in the NYT is from 1999.) Gift cards, too, only became widespread in the late '90s and 2000s.

This example reinforces two general points I've been making in these Decline of Christmas entries:

1) The various signals of Christmas have been steadily fading since roughly the mid-1990s, at least a decade before the "War on Christmas" debate erupted. Rather than special interests knocking off Christmas-lovers, the general public voluntarily dropped out. None of the changes in the signals is clearly related to the internet, macroeconomic indicators, etc. The only strong association I see is the larger cultural shift away from sincerity and sentimentality toward affectation and irony.

2) They have not been replaced with new signals. Rather, we're pulling out investment from the holiday altogether and shifting it into other holidays like New Year's Eve and Halloween (which Lexis-Nexis suggests was taken over by adults also in the mid-1990s). Anything that will afford us greater opportunities to make the duckface for the cameras.

This will probably be it for the series, although I might put up something brief on Christmas trees if there's easy data. Aside from that, leave suggestions in the comments and I'll follow them up if it won't take too long.