Decline of Christmas: usage of "Christmas" vs. "holiday"

[Part one and part two]

Next up, let's see when the shift away from "Christmas" and toward "holiday(s)" began. I searched the NYT from November of a given year through January of the following year, just to make sure the context is Christmas rather than Easter or the Fourth of July. Here's the portion of all articles that use either word: 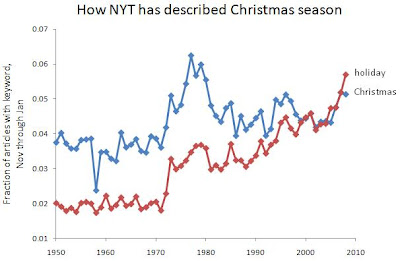 From at least 1950 to 1970, there's no change in how common either word is. During the 1970s, the NYT begins to focus a lot more on the Christmas theme, with both words seeing a big jump (although the one for "holiday" is a larger change). That settles down and both levels peter out during the 1980s. It's only around 1990 that "holiday" begins a steady surge in popularity, while "Christmas" doesn't trend so noticeably up or down. By 1999, the two are used equally frequently, with the occasional year where "holiday" actually beats "Christmas."

The two words are complements rather than substitutes -- their movement patterns basically mirror each other's, rather than a rise in one causing a fall in the other. It's just that over time the gap between them shrinks to the point where both are equally common: 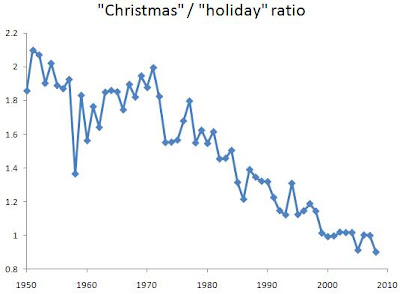 Sometime during the mid-to-late 1970s the gap starts to steadily close. This is unlike the other cases where the shift began in the mid-1990s, and I have no good guess about why this case is so different. It's probably because we need to look at a case where the two words would be substitutes, forcing the user to pick one or the other. That's typically what the "War on Christmas" people mean when they talk about the phrase "Happy Holidays" replacing, not merely being said alongside of, "Merry Christmas."