The decade in pictures, for real

Readers of the NYT have documented the decade with their own photos, and I was shocked to see how selective everyone's memory is. Only the really destructive stuff made the cut, with 9/11 and the recession sharing top honors, although the tsunami and Hurricane Katrina made a decent showing too. We all forgot about 9/11 by about two years later, and it took even less time for the latter two to fade from our concern because there's simply no point in forever worrying about freak accidents beyond our control.

It's only since the recession hit and put everyone in a funk that they've revised the history of the past decade, as though our minds weren't possessed by that heady euphoria of circa 2003 to 2007. Just because you wake up from a dream doesn't mean that it was really a nightmare. Preserving that thread would have actually made the narrative make more sense -- if people in 3 million years have only those pictures to go by, they'll wonder where the hell the recession came from. There is apparently no back-story; it just struck out of the blue like Katrina. No panoramic shots of McMansions crowding each other out of a cul-de-sac? No hoodrat driving her gold-toothed boyfriend around in an SUV with rims? No teenagers with scene hair making the duckface for their digital cameras while walking the hallways of their revamped and pimped-out high school buildings? I mean, where were you people?

So, to provide a partial corrective to the Shit Happens school of photojournalism, I've put together some of my pictures that hopefully preserve better the feel of the middle five years of the decade. The readers who submitted their work to the NYT obviously take better pictures than I do, not the least for not employing lame Photoshop tricks -- but I like to think that captures the palpable excitement that everyone suddenly had for design, even the crudest dilettantes. There are no Big Events because we get over them so quickly, unless it's prolonged like the recession has been. While there is no overarching narrative that I'm shoe-horning everything into, I did try to fit them into patterns. Click images to enlarge.

[Genoa salami with goat cheese and red pear, prosciutto with Brie and apricot preserves, tuna on a baguette rubbed with tomato and olive oil]

Long-term changes in the food industry toward competition based more on variety and quality than on price led to ordinary people obsessing over food. (I missed out on the low-carb craze when it first hit, but I'm catching up now.) Although reality TV as a whole was forgettable, the food and cooking shows got us permanently hooked on variety and quality. Unlike the housing market, the market for good food has not collapsed. 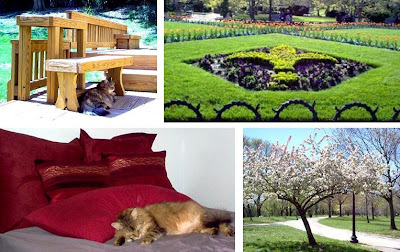 [A large cat shading himself in summer, then stealing someone's bed, two views of the Mall in DC during the Cherry Blossom Festival]

No deep story here. Just a reminder that, despite the gloomy reporting, every spring and summer we escaped from our houses to have fun in the sunny weather. 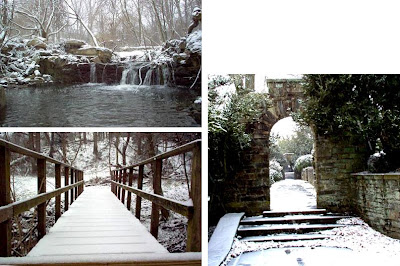 And even in less favorable weather, we still avoided cabin fever by traipsing around in the snow to enjoy the look of winter. 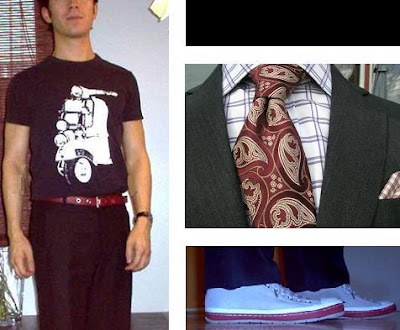 After the unrelenting parade of blackness during the 1990s, we finally got to add some color -- like a little white and red! This was part of the whole new wave revival in pop music, although I'm pretty sure no one dressed this way back in 1977 or 1983. But then "Stacy's Mom" and "So Damn Hot" were also too stylistically self-conscious to really sound like The Cars. C'mon though, at least it brought style back into rock music after the thrift store affectations of alternative rock and the exercise uniforms of the boy bands.

[House in winter, view of Montjuic from my apartment's terrace, Antonio Miro store]

I don't have any pictures of my home in Maryland at night. The first is from where I am now, and the other two are from when I lived and worked in Barcelona while Spain was enjoying a housing bubble and design craze of its own.

[Avinguda Diagonal where the upscale mall L'Illa is]

More views of Catalan oneupsmanship in the contest to be more culturally dynamic than other regions of Spain.

[Friends of mine in their early 20s from Girona, Spain and Tokyo, Japan]

Spain increasingly joined the rest of Western Europe and its offshoots, so that seeing young girls with a nose ring or guys sporting a "fashion mullet" and capri pants was entirely common. Japan finally emerged from its Lost Decade, allowing the trend-thirsty young people to pour into the shopping districts and get their fix again. I suspect most of the NYT pictures reflect a gloomy view because hardly any of them were teenagers or in their 20s at the time. Unlike the boring '90s, the 2000s were a youth decade -- maybe not as much as the '80s were, but still. 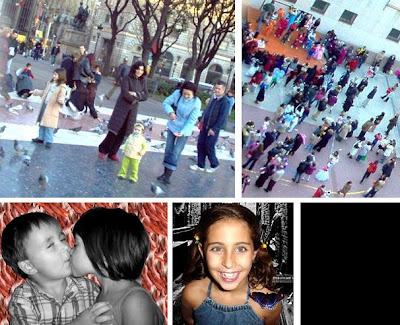 [Children feeding pigeons in Plaça Catalunya, in their costumes outside for Carnival, misbehaving right in front of adults, and smiling for no reason at all]

I'm surprised the NYT didn't include anything on helicopter parents, but then their readership is more childless than the average internet user. The top two are random pictures that I snapped. The girl in the lower right is a Catalan friend's little sister, and the boy in the lower left is her cousin (I have no idea who the daring 4 year-old is).

In The Theory of Moral Sentiments, Adam Smith advises us to keep company with those who are more likely to be indifferent spectators of our behavior -- a close friend might indulge our continual brooding when they should really help us snap out of it, or encourage our vanity in good times when they should really help to keep us grounded. In today's world where it's trivial to sort into groups of very similar people, we tend not to run into these indifferent spectators often or at all. But children, especially if they are not your own, couldn't care any less about the feelings of grown-ups. When you're in danger of letting a promotion or the way a new suit looks go to your head, they'll give you the "I don't get it" look and take you down a peg. And when you're brooding at unnecessary length, they may not tell you outright to get a grip and move on, but their relative lack of sympathy and indulgence are a signal to do so all the same.