The recent wussifying of music in one picture 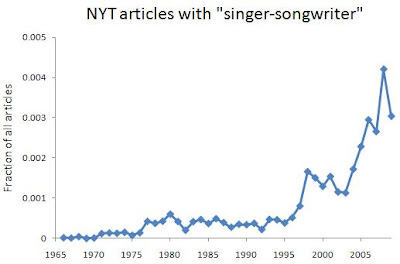 After rock music died in the early 1990s, what would move in to take its place? Techno did somewhat, although not really on the TV or radio, and even that wasn't until the late '90s or so. The new wave revival of 2003 - 2006 was even farther away, and it didn't last very long anyway. Instead, it was the singer-songwriter genre that immediately and steadily began to spread. Hey, if the well of rock music had dried up, why not just divert a bunch of sewage into the pipes intended for drinking water?

To give just one example of how deprived of testosterone these celebridorks are, what ever happened to rock musicians pairing off with stunning models? David Bowie, Steven Tyler, Michael Hutchence -- they had it figured out. Ric Ocasek first hit it off with his future Czech supermodel wife Paulina Porizkova in 1984, when he was 35 and she was 19. In contrast, crybaby singer John Mayer recently dated the homely Jennifer Aniston when he was 31 and she was 39.

I don't mind some of the older singer-songwriter stuff because they weren't overly emotional and sappy. Like other music of the time, it was just emotional enough to get your attention, but not so dripping with confession that you could no longer identify with it, unless you were a clingy stalker loser yourself. Seriously, no one wants to see your inner child fully exposed -- get a grip and cover that shit up a bit.