Since our social capital is in decline, and since we hate going outdoors, it shouldn't surprise us to learn that hardly anyone goes Christmas caroling anymore:

In 2005, a National Christmas Tree Association survey found that only 6 percent of respondents planned to go caroling--down from 22 percent in 1996.

I searched Lexis-Nexis for more dates but couldn't find any. If this is like everything else, it's probably a bit lower than 6% this year, and would have been even higher than 22% in the '70s and '80s. The last time I remember carolers knocking on my family's door was sometime in the late '80s or early '90s in Upper Arlington, Ohio, a white upper-middle class suburb of Columbus. Whenever the change happened, it sure seems to have started before what the "War on Christmas" people talk about, namely more recent battles over whether Wal-Mart or whoever uses "Christmas" or "holiday" in its ads and signs. Here is yet another piece of evidence that the general public was already growing apathetic toward Christmas during the 1990s.

OK, maybe we don't drop in on our neighbors anymore, but how is Christmas music doing in general? Wikipedia has a list of nearly 400 Christmas songs, and here they are by release date: 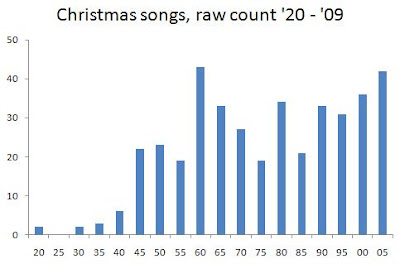 But this doesn't account for the size of the recorded music industry, so here is that same number of Christmas songs but standardized using the number of RIAA gold and platinum singles (standard or digital). Unfortunately, the RIAA certification doesn't go back through the 1940s or before. The x-axis labels are the first year in a 5-year stretch: 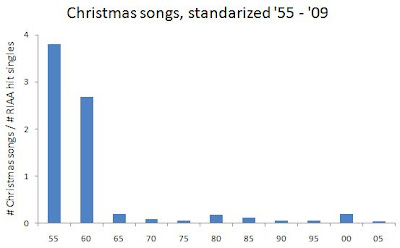 It's pretty clear that the 1955 - 1964 period was a lot more productive. Still, the RIAA certification had only just begun, and the mass market music industry wasn't so mature either. So trying to give the benefit of the doubt to more recent times, here is the same graph as above, but only from 1965 and later: 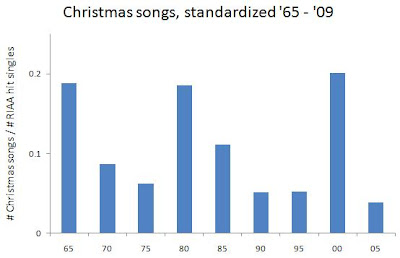 No clear trend overall, although the jump in the first half of the 2000s looks suspicious given every other bit of data we have on the popularity of Christmas.

Instead of looking at a random list of 400 songs, let's look at those Christmas songs that are rated the highest. ASCAP published a list of the top 25 most played Christmas songs from 2001 - 2005, and here they are by release date: 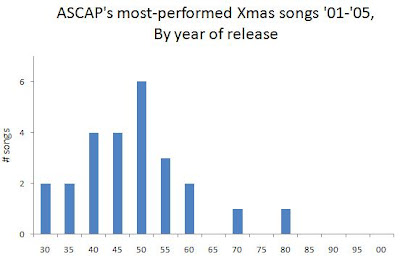 Now that looks more plausible. Clearly most of the recent Christmas songs -- and by that I mean within the past 45 years -- have been published but not heard and retained. There's one song from 1984 ("Do They Know It's Christmas?") and another from 1970 ("Feliz Navidad"), but that's the extent of worthwhile innovation for nearly a half-century. I don't buy the argument that it takes time for new hits to catch on -- not 50 years. There are plenty of songs from the '80s through the present that remain popular -- but they are not Christmas songs.

Rather, I think it says more about the flagging interest in Christmas. We certainly can introduce new traditions -- after all, before 1950 many of our traditional songs didn't exist -- so why haven't we? On the demand side, consumers don't hold Christmas songs to high standards since they don't care very much about that holiday anymore. So on the supply side, artists will not compete based on quality of songs, but on quantity and price -- just churn out a bunch of shit on a Christmas theme and price it really low in order to move it.

These Christmas song data show that we're not merely shifting from one Christmas tradition to another -- say, if blue and orange became the recognized Christmas colors, replacing red and green, but where the presence of these new Christmas colors was still ubiquitous. Rather, we're junking those traditions and failing to replace them altogether. In the post below, we saw previous survey data showing that a smaller portion of American families are even exchanging gifts -- not merely that they are exchanging gifts as often as before, but just giving gift cards instead of real presents. Gift-giving on the whole is down.

I don't mind the secularization and commercialization of Christmas -- fighting either of those trends is a losing cause, and that probably doesn't matter anyway. Christmas did just fine from the '50s through the '80s, even though most new Christmas songs weren't religious and shopping for material gifts became more common. It's the apathetic, ironic mood that the culture sunk into starting in the mid-1990s that is the real danger to Christmas. The secular and commercial Christmas was still sentimental and worked people up into the holiday spirit, offering many suitable replacements for older traditions. The apathetic-ironic attitude toward Christmas doesn't only rail against commercialism. * It urges us to not give a shit no matter what the source of our Christmas cheer might be.

* A hollow charge, given how many formerly sacred domains those people have allowed to become commercialized, such as getting food and shelter.