Continuing our look at the public's waning interest in Christmas, let's turn to something more common than complaining about ugly sweaters. Our main form of entertainment for the last 50 or so years has been television (it still is), and Christmas-themed episodes have been shown since the beginning. Still, we'd expect the number of episodes in some year to reflect how much the public enjoys Christmas -- more when interest is high, and low otherwise, all other things being equal.

I couldn't believe it when I saw it -- although maybe I shouldn't have been so surprised -- but Wikipedia has a page that lists nearly 1,100 Christmas TV episodes for the U.S. alone, including what year they were broadcast in. Here is a graph showing how many episodes came out in a given year, using a 2-year moving average: 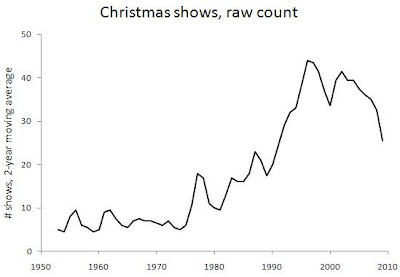 Remember that these raw numbers aren't corrected for anything, so in the early stages when TV sets weren't widespread and there were only a few shows that could put out a Christmas episode anyway, this graph is probably not an apples-to-apples comparison. There's a pretty steady increase starting in the mid-'70s and peaking in 1996. Some of that may partly reflect the growing number of people with TVs and the proliferation of shows being broadcast, but I doubt that's all of it, simply because there's a nearly 10-fold increase in the number of Christmas episodes during that time.

However, once the line starts dipping down, that cannot be due to how many people own TVs or how many shows there are -- those are still both growing, not shrinking. There is an upward blip in 2001, perhaps due to the shot-in-the-arm of sincerity that we got after 9/11, but after 1996 the trend has been steadily downward. For those guessing that the internet began siphoning viewers away, lowering the demand for Christmas TV episodes, note that the internet has not been much of a substitute for TV.

To try to correct for the changing world of TV show production and consumption, I looked for data on how many TV episodes were broadcast in each year. Together with the above data, we could answer the question, "What portion of all TV episodes in some year were dedicated to Christmas episodes?" I'm sure those data exist somewhere, but I couldn't find them easiliy. (Although if a particularly bored reader finds them, I'll use them to make the corresponding graph.)

But I did find data on how many households owned a TV. This isn't ideal because it's not like 5 Christmas specials being split up among 10 thousand or 10 million households makes any difference -- any episode can be shown to an unlimited number of viewers, unlike splitting up 5 plots of land among 10 thousand or 10 million households. Still, I use TV ownership as a proxy for how mature the TV industry is. The source only went back to 1970, and is only unbroken starting in 1985, but the overall picture is still pretty clear: 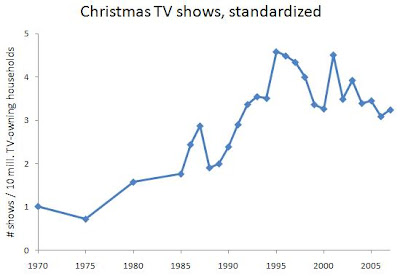 Again we see the surge starting in the mid-'70s, a peak this time in 1995, and a decline afterward, aside from the blip in 2001. So as with the "dissing on ugly sweaters" phenomenon, it looks like the mid-'90s were the turning point in the public's growing apathy about the Christmas season. And like that example, this shows that the "War on Christmas" is really more about a plummeting of consumer demand rather than a tiny special interest group imposing their plan on an unwilling public. Sadly, the public seems to care less and less about Christmas.

I haven't watched TV in nearly forever, so I have no hunch about this, but it would be worth comparing how sincere vs. ironic or above-it-all the Christmas episodes are from the period when they were increasing vs. decreasing in popularity.

I remember that as late as 1994, My So-Called Life ran a Christmas episode about teenage runaways -- but the mother and daughter mend their relationship. (Turns out it's on Hulu, "So-Called Angels"). In 1991 there was the Saved by the Bell two-parter that focused on a not-crazy-or-addicted homeless.man and his daughter -- but they get taken in and given help by Zack's familiy. And of course the first Simpsons episode to air was the 1989 Christmas special where Homer is down on his luck -- but the family becomes richer because they adopt the dog Santa's Little Helper. If there are any couch potatoes with better knowledge, feel free to fill us in on what the more recent Christmas episodes have been like.