Keyboards that you can feel and hear working

Next up on the list of things to help focus attention and boost productivity when working at the computer: a clicky keyboard. You know, the kind that folks used to type with before computers became goof-off devices?

Over the past five or so years, it seems like more and more people are starting to realize how awful the typical computer set-up is for getting work done. There was a huge shift in the mid-'90s when the internet became the cocooning society's go-to outlet for wasting time indoors rather than enjoying a social life, playing a sport, tending to a hobby, and so on.

(The technology did not cause cocooning, rather cocooners adopted and shaped internet usage to fit their preference for isolation.)

Ever since then, the suite of computer-related stuff that is readily available — both the functions of physical devices and software, as well as their look and feel — has become entirely focused on optimizing computer use for distracting ourselves. The computer as the new idiot box has displaced the computer as productivity machine.

The keyboard is the main way in which we interact with the computer for productive work. You can browse around the web and play simple games largely by pointing and clicking with the mouse, but not for anything else. We need to know that the message we intended to send the computer actually reached it. And that requires feedback.

The clearest way to get feedback is to look at the screen and see if what you meant to type did in fact show up. This requires too much conscious monitoring, though, when you really want the thoughts to be flowing from your mind to your fingertips automatically. Proofreading as you type is like trying to listen to your own voice while you speak, primed to catch errors and fix them on the spot. Keeping an ear open for gross errors, fine; but not constant monitoring.

Brains don't like being in two incompatible modes ("multi-tasking"), especially at such a fundamental level like conscious vs. automatic. Hence it is better to be receiving a more unconscious form of feedback.

Typing is a tactile activity, so the brain wants tactile feedback that the correct key was pressed. That's more of a muscle memory thing — you'll just sense that you hit the wrong key. Then you may have chosen the correct key, but the brain still wants feedback that the key was pressed enough to register. It's like your heel striking the ground when you're walking — each heel strike lets the brain know that you successfully took a step. If not, something went wrong, and you'd better try to steady yourself or brace for impact.

For me, hearing the clicks plus feeling the keys pressed is better than the tactile response alone. It makes the feedback signal have another independent piece to it, giving it redundancy - if I don't feel it, maybe I'll at least hear it, or vice versa.

Today's soft and quiet keyboards are too mushy to get good feedback about whether the key was pressed or not. There's no clear feeling of "OK, there it went, now on to the next key." The worst are those chiclet style keyboards that Apple has popularized — a good rule of thumb is that if Apple popularized a feature, it is for the idiot box use rather than the productivity use of the computer. Give it a year or so, and we'll all be typing on touch-screens that provide no tactile feedback at all.

I'm fortunate enough to have an IBM ThinkPad from the mid-2000s, which has a fairly stiff keyboard by contempo standards (a feature of the series that has been junked as of the 2012 models, I hear). Still, for office / home office work on desktop, I need a proper "mechanical" keyboard, as they're called. But which kind to choose?

Here is a nice video review of the main types from Tek Syndicate on YouTube, and here is a much more in-depth look at them. None of them seem to be better than the others overall, but are simply specialized for different tasks — playing video games, typing, etc.

They are definitely more expensive than the cheap awful junk that come packed-in or built-in, ranging from about $80 to $130. But they'll last way longer, do their job way better, and make being productive more enjoyable, so that's not a bad investment.

I've used the Das Keyboard a lot before, and it feels and sounds great. It is toward the high end of the price range, though. What's caught my eye is the latest incarnation of the old "model M" keyboards by IBM that used to be everywhere in the '80s and early '90s. The spring-based mechanism is somewhat different from the newfangled ones like Das Keyboard, but they still provide great feedback to the fingers and ears. They're now manufactured by a company called Unicomp, and made in the USA if you can believe it. Most of their models look to be between $80 and $100. Browse their product line here.

Check out this one. Its buttons are meant for use with a Mac, but I can get over that given how cool the colors are. The two-tone keys in beige and light brown stand out against the dark black tray. 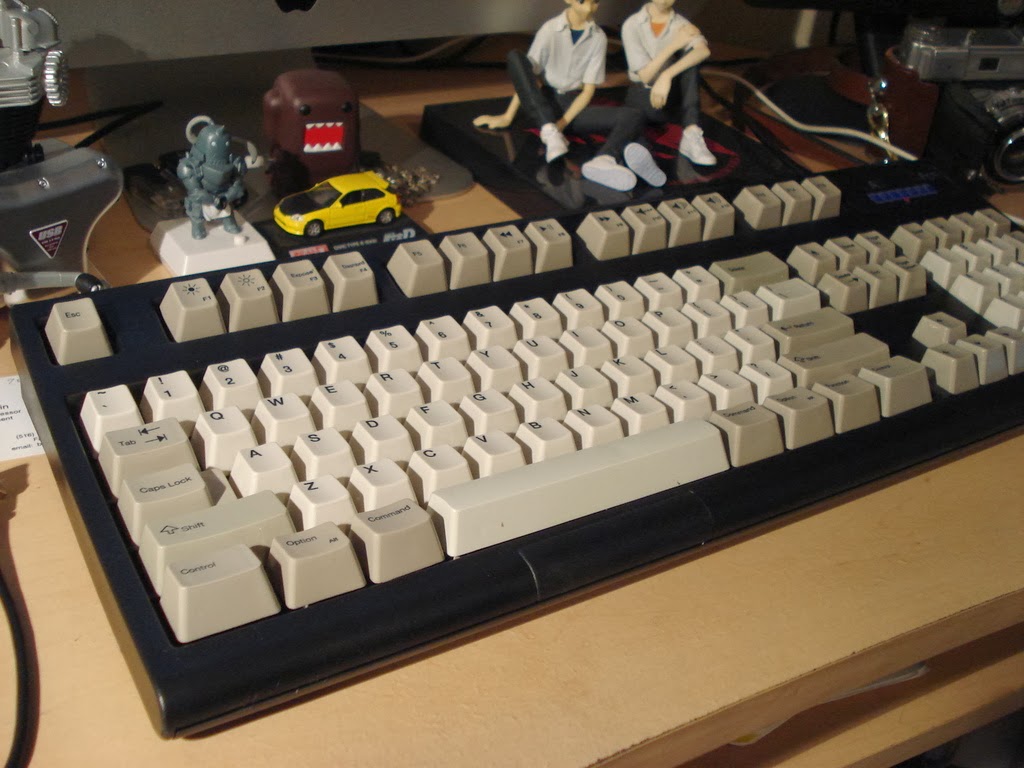 Something with a little warm color keeps the keyboard from looking so harsh and design-y. Like, it's just a keyboard. Compare to the ubiquitous Apple aesthetic of silver, gray, and white. The whole Zen Buddhist / Space Age look just leaves me cold and puts me to sleep.

Related posts on re-establishing the computer as productivity machine:
This one about light-on-dark color schemes for word processors, spreadsheets, etc.
This one about distraction-free text editors. (I'm using Q10 to type this post, and it really is striking how free of interruptions the task has been.)
Categories: Design, Psychology, Technology