Deregulation did not affect airfare prices, and Neoliberal cluelessness generally

The airline industry used to be under government regulation, whereby the state could have a say in what cities would be served, which cities could be connected with which others, what the ticket prices could be, and so on. Then the government deregulated the industry, letting the airline companies make those decisions on their own.

Neoliberal economic theory says that this will open up competition among airline companies, which will lower prices for consumers. How this happens does not matter in the details -- in the economist's mind, real-world outcomes must be special cases of a general principle. Here, "deregulation leads to greater competition among producers, which will lead to greater savings for consumers." No need to check facts or run case studies -- the theory said it will be so, so it must be so. The only open question is the magnitude.

Without any pre-conceived notions, look at the red line in the following graph showing the real cost per mile of airline travel, from 1950 to 2005, and point out where the deregulation event occurred. It should pop out if the theory holds water. 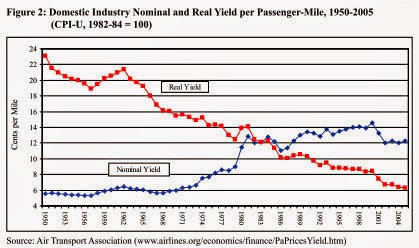 You don't see the event at all because deregulation had no impact on prices. What you see is a single downward trend with no acceleration (that is, a sharper and sharper decline). Your best guess would be around 1962, since prices had been creeping up for five years before undergoing a long and steady reversal. In fact, the Airline Deregulation Act was signed in 1978. When a major cause is invisible in a graph showing the trend in the effect, then it is not the cause of the effect after all.

Beyond that, you might be surprised to learn that it's an open question whether deregulation was such a boon for the flying public in the first place. In a 2007 paper, David Richards looked at airline fares since 1950 and concluded that deregulation accomplished little. Fares had been going down before 1978 and they kept going down afterward. Yield per passenger-mile showed no change before and after deregulation (see chart on right). Growth in passenger miles traveled actually slowed after deregulation, and fares were mostly about the same as they would have been under the old CAB formulas. His conclusion: "This paper makes clear that the grant of pricing freedom to the airline industry has generally resulted in average prices being higher than they would have been had regulation continued under the DPFI rate-setting policies."

What did happen, Richards found, was that fares decreased on routes between big cities and increased on routes between smaller cities. That may or may not have been a good thing on net, but it's certainly a far different story than the one we usually hear about deregulation. For more on this, see "Terminal Sickness," a fascinating look at airline deregulation and the death of the mid-tier market by Phillip Longman and Lina Khan.


There's the link to rising inequality, BTW: it's cheaper for elites to fly between big cities, but harder for the rabble to fly between smaller cities.

Referring back to the graph, in the years surrounding 1980, the cost per mile was about 12 cents, and 20 years later it was around 7 cents. Prices fell 5 cents in 20 years. Presto, "deregulation worked"! -- just ask this glib article in The Atlantic.

I'm not claiming that deregulation caused the rate of decline to slow down. Maybe that fact about the history of the airline industry would have taken shape regardless of what Congress did or did not sign into law. But if we are going to link deregulation with price trends at all, we would have to say that it was harmful to consumers in slowing down the decline that had been going for damn near 30 years before deregulation.

(Skip down to the last three paragraphs to see what non-effects or harmful effects deregulation has had in other major cases.)

I also have no solid idea about why prices have been falling since at least 1950. My hunch is that there were low-hanging tech improvements for such a brand-new industry -- remember that consumer airliners are modified bombers from WWII -- and that making things more efficient allowed some of the savings to be passed on to consumers. After several decades, the improvements get harder and harder to find, and are more costly to implement, so not as much savings gets passed along as before.

But why would airline corporations bother making their businesses more efficient and passing some of those savings along to consumers, when they were protected by government regulation, barriers to entry, price controls, and so on? Maybe businessmen had a different psychology back in the '50s and '60s compared to the '80s and '90s. Of course they did: the former were in the final stage of the Great Compression, whereas the latter were in the beginning of the Great Divergence. The spirit of the former was to rein in greed (even if it could not be wiped out), while the spirit of the latter is dog-eat-dog.

These psychological changes would have applied to the regulators as well -- the former leaning on airlines to make their businesses more efficient and to keep cutting prices in step with that, and the latter looking the other way since they came to view regulatory power as bogus.

And I'm sure consumers would have felt differently back then too, shunning or slandering the airline companies if they did not make things run better and cut prices. Consumers and producers were supposed to treat each other out of good faith, and not improving things would have been seen as laziness or stinginess.

It's not surprising that sensible explanations like this would not occur to neoliberal economists, easily the most autistic camp within social science (already a nerdy bunch). They'll allow that people are not all identical robots, but they still do view them as pieces on a chessboard -- all sets of pieces obeying the same rules and constrained into the same range of behavior no matter what chessboard they appear on, whether a 1950s chessboard or a 21st-century chessboard.

Those of them who have read their Adam Smith like to cut down the arrogance of social engineers, who in their mind are government regulators, by comparing them to chess players who see people as chess pieces, oblivious to or dismissive of the idea that those people might have their own drives that the chess player cannot simply over-ride by lifting them in the air and swinging them over toward another square.

Yet the neoliberals themselves have that same mindset, only instead of "prudent government regulation" it's "getting the incentives right." Just make the currents point West, and the ships will sail West. The notion that the boat might have a power motor, and is not some silly little raft, or that the wind-generator of policy incentives might not blow very hard, doesn't matter to them.

Nor does it occur to them that what they believe are the right incentives might be the wrong incentives. No humility. The airline deregulation case is a textbook case of this -- whatever wise changes in incentives there were circa 1980 seemed to make the airlines greedier and consumers worse off than under the earlier set of incentives.

The history of the programs flying under the banner of "deregulation" have mostly served to enrich the top and squeeze the bottom, so the standard story about airlines should have sounded suspicious from the start.

Deregulating the labor market has gone along with falling wages, ditto for deregulating residence and labor of immigrants (falling wages and higher housing costs). Deregulating finance has nearly blown up the global economy. Deregulating cable TV hasn't stopped prices from doubling. And as with airlines, real prices had already been falling in the telephone industry long before the divestiture of AT&T during 1982-'84, and even before the 1974 anti-trust lawsuit against them. (See this graph, where the gap between prices for phone services and for all items was already closing by the late '60s).

This all jibes with how most folks feel about how much worse off they are economically than their parents or grandparents' generation (except the elite, which has swollen in numbers and enjoyed greater wealth). It's not that people think having a toilet is worse than having an outhouse, but that progress was just zipping along for their grandparents and parents, while now that trend has slowed down, flatlined, or reversed, depending on the domain of life. I can't think of an uplifting way to end this post. Just that looking through the reality, rather than the theory, vindicates how most people feel about the pace of progress these days.