Ancestry in India revealed more by dance than by language

Continuing an earlier post which gave evidence for traditional dance styles being a better predictor of genetic ancestry than the language spoken.

Recall that Hungarians speak a non-Indo-European language, yet their folk dances place them squarely within the Central European -- and even Indo-European -- norm of step dancing. The style is characterized by fancy footwork, percussive footwork, and keeping the body's vertical axis more or less in place.

Language is a little too utilitarian of a trait to be free from cultural selection pressures, hence the handful of cases like the Hungarians who adopted the language of genetic outsiders for one good reason or another. (To trade, to serve as clients to their patrons, to move up the status ladder dominated by foreigners, and so on.)

Dance styles do not play such a utilitarian role in people's lives, and there is a very strong sense of "this is how the dance is done," so they are more conservative against selection pressures to adopt foreign traits. Cultural and genetic ancestries will tend to overlap, but they overlap much more closely when dance is singled out as the cultural trait, and not quite so closely when we look to language.

Now for the picture on the other end of the Indo-European world. There are two major language families represented in India, Indo-European brought by one branch of the, er, Indo-Europeans, and Dravidian, which better reflects the state of things before their arrival. Here is their distribution today, with the I-E languages in yellow and orange, and Dravidian in green: 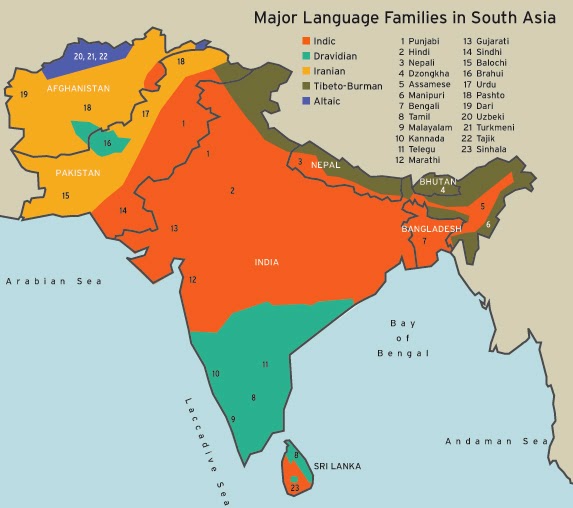 Judging from language would lead us to expect I-E genepools everywhere but the southern third of the country and a fringe along the Himalayas. But when we look at the frequency of key genetic markers of the I-E migrants, such as lactase persistence, we see them confined more tightly to the northwestern regions (see this broader discussion by Razib): 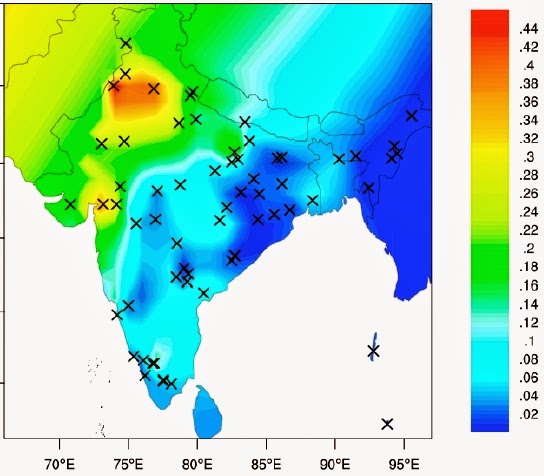 The Indo-Europeans were (agro-)pastoralists, so they would have been under strong selection pressures to get more calories out of milk through metabolizing its sugar. Before the I-E folks showed up, there was a large-scale sedentary civilization based on agriculture in the Indus Valley, and you don't need to digest lactose if you're subsisting on grains. So, the blue regions above are more likely to be the descendants of that pre-IE civilization, driven somewhat to the south and east by the I-E pastoralists who settled in the northwest.

Notice that the language map vastly overstates how genetically Indo-European the Indians are. However, looking at language as a utilitarian trait, rather than a neutral one, we infer that large swaths of the Subcontinent who are genetically not-so-Indo-European have adopted the languages of foreigners for one good reason or another.

This disconnect is also evident in outward appearances. Take an eastern group such as the Bihari, who speak I-E languages. They have fairly dark skin, noses that are wide at the bottom, and low-lying nasal bridges. They would not look out of place in Southeast Asia or the Pacific Islands. Contrast that with the relatively lighter-skinned and hawk-nosed people of Pakistan, who would not look so out of place in Iran.

But external appearance is not a cultural trait, so let's turn to dance. Of the roughly 10 canonical forms of Indian classical dance, only one is native to the northwest -- Kathak (see an example clip here). It is a spirited step dance straight out of the Indo-European playbook. In fact, it looks a lot like Flamenco (example clip here for those living under a rock), carried into Europe by the Gypsies, who also speak and I-E language and who also hail from northwestern India -- 1,500 years ago. The common cultural ancestor between today's Flamenco and Kathak must go back even further. Here is a clip of a dancer from each style comparing and contrasting their similar styles.

All of the other classical dances of India belong to the blue regions in the lactase map. They ought to look quite different from Kathak, and they do: they include movements that are slower, limber poses are held as though the dancers were sculptures, and bending the body's vertical axis out of alignment is common. This is what most of us think of when we hear "Indian classical dance." They are also likely to feature costumes with a variety of garish colors, ornate headgear, and masks or make-up with exaggerated expressions. All of these features may tie together in a narrative / opera form, not just dance by itself. See this clip of the Bharatanatyam form, and this clip of the Kathakali form.

Those features place almost all Indian classical dances with those of Southeast Asia, from Thailand down into Bali. In fact, some of the distinguishing movements would not look out of place in a crowd of people practicing Tai Chi, nor would the costumes look so strange to a crowd used to Chinese opera or Japanese Noh theater.

Once again, dance styles are more faithful informants about a group's genetic ancestry than language is. You may adopt an Indo-European language in order to trade with, apprentice under, etc., a newly arrived powerful bunch of foreigners. But when it comes to expressing your race's identity in a communal setting, the dancing will be Dravidian.