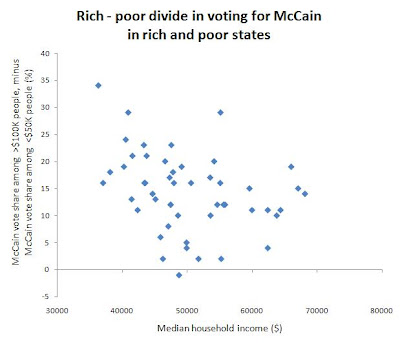 As you can see, the richer a state is, the smaller the gap between rich and poor in voting for McCain. In poorer states, the rich are far more likely than the poor to vote Republican, compared to in richer states. (Spearman's rank correlation is -0.38, p = 0.008). This is as strong as the correlation A.E. found between the rich - poor gap and the percent of a state that voted for McCain. So, how rich a state is still tells us something about the size of the rich - poor gap: we explain 14% of the variation in the rich - poor gap by making it a monotonic decreasing function of state income.

A.E. defined "rich" as earning more than $100K, and "poor" as earning under $50K. Andrew Gelman, one of the authors of Red State, Blue State, Rich State, Poor State, showed similar results by cleaving the rich and poor as those earning above vs. under $50K. See here and a follow-up here.