While reading the news about the police naming Adam Walsh's killer, I was struck by the date -- 1981 -- and tried to think of the last time there was a high-profile serial killer. The Beltway Snipers... and that's about it. Son of Sam, the guy who killed Adam Walsh (Ottis Toole), and Jeffrey Dahmer at the latest.

So I went to Wikipedia's list of serial killers in the US, and it seems like most of them operated in the 1970s and '80s, peaking in the early '80s, with some in the mid-late '60s and early '90s. In other words, during the upward portion of the most recent cycle of violent crime. After looking through all of the American serial killers' entries, by a back-of-the-envelope calculation, I estimate that the period from 1940 to 1960, and from 1995 until now, show only 40% - 50% as many serial killers as you'd expect if they occurred at a constant rate.

That may not seem surprising, since the crime statistics show these trends for homicide and forcible rape, and serial killing is a special case of these. Still, serial killers just seem weirder -- they're not stabbing a guy to get his wallet or shooting a rape victim to keep her from testifying. And it's not an in-the-heat-of-the-moment murder like when a barroom argument escalates. They also tend to target marginal groups who can't easily come forward to the police -- children, the elderly, prostitutes, etc.

This shows that the recent decline in crime is not primarily due to putting more cops on the beat, which would only deter crimes like barroom brawls, street-corner drug deals, and so on. An academic article on the decline in all forms of child abuse since the early '90s stresses this point. (Follow-up data show the downward trend has continued after the article was published.) They also emphasize that the increasing use of the death penalty doesn't explain it either, since most crimes that declined were not punishable by death, or even close to it.

It's like there's some infectious disease that spreads and burns out like an epidemic. It doesn't have to be germs of course -- although it could be. Interactions between predators and prey, or hosts and parasites, can show cyclical behavior, and criminals and the law-abiding population are an awful lot like parasites and hosts. The point is that it's a single, general thing that spreads and burns out -- not a million different trends in crime, each with their own particular causes for rises and fall-offs.

Update. Here's a graph showing how often the phrase "serial killer" has appeared in the NYT, as a fraction of all articles during a year: 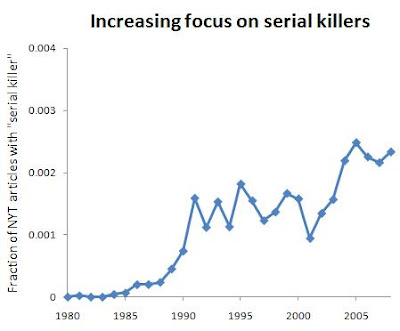 The first time the phrase appears is 1981, but doesn't really take off until the late '80s. It stays steady throughout the '90s, and increases more still after 2000. As with other examples that I've discussed here and at GNXP.com (such as "sex predator" and "pedophile"), this is more consistent with a delayed reaction -- by about a decade or so, and without checking crime statistics to see if the increasing coverage is justified by an increase in the crime rate. [End update]

Further evidence for the decline in serial killers is that no one makes movies about them anymore. The Wikipedia entry for slasher movie shows that most were made in the 1970s and '80s, that they peaked in 1983, and died off in the early '90s. The only ones since then are movies about previous slasher movies -- real serial killers are so out of the public mind that we can only make movies that are "meta" and self-referential. Yeah, there are those movies like Saw that aren't like that, but they're not common -- compare to 1984, when A Nightmare on Elm Street, Friday the 13th: The Final Chapter, and Silent Night, Deadly Night came out, among others.

I remember as a middle-schooler staying up late at friends' houses to watch Sleepaway Camp or My Bloody Valentine on Showtime, and just attributed my lack of interest in those types of movies afterward to growing up. But the teenagers who followed didn't seem to dig them at all. Someone who's 25 now was still in elementary school when the crime wave began subsiding, and throughout their adolescence and adulthood, they've known nothing but safety. It must be hard to sell slasher movies to a generation of young people who aren't terribly afraid of that stuff happening in real life.

The slasher movies, where teenagers are always running off into the woods to fuck, also show how much more widespread adolescent sluttiness was back then, whereas it has been declining since at least the early '90s. The worst thing now that could happen to teenagers making out is that someone might film it and upload it to YouTube. Why, back in my day, we had to keep one eye over our shoulder to look out for the ax-wielding maniac! You spoiled kids.