Supreme Court is distraction issue during death of culture wars

Because we're in a period of profound political realignment, we probably ought to be suspicious of the usual suspects having the usual hysterical reactions to the death of a Supreme Court Justice and the vacancy that will be filled. That goes for both conservative and liberal sides.

Having these hysterical reactions, and blindly rallying around the political figureheads, has achieved nothing so far during the culture wars, so why continue with their impotence and irrelevance? The culture wars are finally fading out, so the hysteria will resonate even less broadly and persuade fewer people than before.

Indeed, one crucial aspect of the culture wars has been the over-emphasis on the judiciary branch of the government, as though it issued the ultimate reckoning on any matter. Reminder: in a democracy, the government has a monopoly on the legitimate use of force, and that is ultimately what decides which way the nation goes. No men with guns to back up a policy? Then there might as well not be a policy.

Consider one of the most vivid examples of the government changing the way the country works -- desegregation during the 1950s. In school we all learned about the Supreme Court's 1954 decision to overturn legal segregation, but given how hostile people were to the change in the segregated parts of the country, what were the nine gray-haired Justices going to do about it? Nothing -- nothing whatsoever. All they do is render a verdict, an opinion.

What actually desegregated the South was the sending of men with guns to move aside hostile white citizens, and escort the black students into the school building. In 1957 at Central High School in Little Rock, Arkansas, the governor had called out the National Guard to prevent desegregation. He did not bother having state-level judges issue contrary opinions to the Supreme Court -- he called out the state militia. Men with guns have a more persuasive effect on getting what you want.

Did President Eisenhower respond by fighting a legal battle over whether the Arkansas state militia was allowed to forcibly prevent desegregation? He wasn't an idiot, so no -- he escalated by sending in the 101st Airborne Division of the U.S. Army. National military vs. state militia -- checkmate. Desegregation followed. A few stark images say more about how things truly changed than reading about the Supreme Court's reasoning: 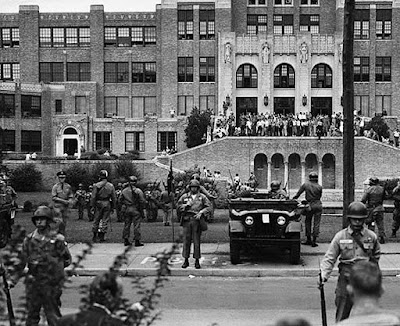 When President Kennedy faced similar problems, he simply nationalized the state militia and told them to beat it. Sometimes local police served as escorts for the black students, but at any rate it was always men with guns.

Perhaps an even more dramatic example of government-driven societal change was the ending of slavery. Nobody paid any attention to what the Supreme Court thought, one way or another. Armies on one side and the other side lined up, killed each other, and ultimately the side with the stronger military got its way. During the era of Reconstruction afterward, the Northern / Republican policies of enfranchising the freed slaves and giving them jobs was dependent on the presence of the U.S. Army. They could only push through such policies after the Army took control over the Southern states, and when the Army was withdrawn in 1877, those policies fizzled out.

None of that has changed. The local police, state militia, and federal military are still under control of the executive branch of the government. If there is going to be a major showdown over some hot-button political topic, it will be decided when the men with guns are called in to favor one side or the other -- or, what amounts to the same thing, if they are not called in, giving an implicit pass to the situation unfolding as it already was.

Consider abortion, the most popular culture war distraction issue. The Supreme Court has little chance of overturning Roe v. Wade anytime soon. But even assuming they did, you can bet that the abortion clinics would continue to operate, albeit with more caution and security measures taken for both the staff and the patients. If you think the whole abortion sector of the hospital industry is just going to roll over because the Supreme Court said so, you're hopelessly naive.

Rather, it would take the executive branch to send men with guns to apprehend abortion doctors, to block abortion-seeking patients, and so on. Once it escalated to the President sending in the Army, there would be no more discussion or protest.

The same goes for gay marriage. Whether an individual wants to preside over or prevent two homos from getting married, ultimately they will go along with whatever policy that the men with guns have been sent in to enforce.

Ditto for immigration and border security. If the local border patrols want to defy Obama and check immigrants as usual, perhaps the Army would be sent in to hold back the border patrol officers. Then again, perhaps the Army would decide that was crazy and mutiny against the President. On the other hand, if the President (like Trump) wanted to really beef up border patrol, he could send in the Army and not leave it to local officers who might be threatened by local politicians, employers, and the like.

I think conservatives have the most realistic picture about who really makes changes when it comes to the 2nd Amendment. They aren't so afraid of the Supreme Court issuing an opinion that is at odds with owning firearms. What really disturbs them is the prospect of men with guns showing up at their door to forcibly remove whatever firearms they've been sent in to remove, where the individual would either go along with the removal or show down against the police / state militia / U.S. Army and get martyred.

Whether those policies originated as laws passed by Congress, or as executive orders signed by the President, would make no difference. It would still be the executive branch that held ultimate power over the men with guns -- the most central aspect of a democratic form of government. Without that, allowing citizens to vote wouldn't matter, since local strongmen could make things turn out however they wanted.

In moving out of the culture war period, we ought to worry a lot less about what opinions the Supreme Court may or may not deliver. Ultimate authority rests with the President, so we need only worry about getting Trump elected, and not be distracted by who he would or would not consider for the Supreme Court. Cruz already tried to play that hand last night at the debate, warning that Trump would nominate liberal Justices -- a lie, but also irrelevant. Thankfully that appeal to culture war fervor has failed just as pathetically as his attempted attack about "New York values".

Now that the culture war is evaporating, we can all wake up from our collective delusion that the appointment of a Supreme Court Justice is akin to the birth of a god who will divinely intervene in all aspects of society for the rest of their godly existence.