People who compete for status in the lifestyle arena, as opposed to the career arena, have settled on two main battlegrounds -- food, and leisure activities. (See earlier posts on the career vs. lifestyle vs. persona contests here and here.)

In practice, "leisure activities" nowadays means what kind of entertainment you consume in your free time. Only a minority of lifestyle strivers are very into competing over rock-climbing, yoga, skiing, and other physical activities outside the home. All lifestyle strivers, though, are heavily invested in contests over the kinds of entertainment they consume, mostly while relaxing at home.

Food works as a status contest in the lifestyle domain because it's part of a person's regular routine, and there's enough innate interest in it already for the pleasure that it gives, rather than some boring part of a person's routine that would not energize a competition. The same goes for entertainment.

And yet for all of the exotic novelty that lifestyle strivers aim for -- to distinguish their lifestyles as beyond the familiar, pedestrian norm -- the actual objects of their competition are still made right here in America (or other culturally familiar first-world countries).

It's one thing to show your Facebook friends that you had beef cooked in a Mexican style -- carne asada -- but it's quite another to eat beef that is from Mexico. You want the raw materials to be American (or first-world), and only the style of preparing them into a final meal to be exotic. You wouldn't want to risk food poisoning at every meal and cut short your lifetime career of uploading food pictures to your social media accounts.

It's also telling how little the entertainment strivers consume of foreign media. Remember -- one of their goals is to show how their tastes are beyond the familiar norm, e.g. by eating carne asada and drinking horchata. Why don't they brag about their consumption of Mexican TV shows or movies? The language barrier is not the answer, since they can be watched with subtitles, and again they otherwise prefer the status boost from exotic and hard-to-pronounce stuff.

The simplest explanation seems to be that they recognize how crappy the production of Mexican entertainment is, especially compared to first-world standards. The quality of acting, the cameras, the lighting, the sound recording, editing, directing, etc. -- some or all of these elements are just not up to snuff.

Yes, there's a tiny niche of film dorks who compete over who has seen the most obscure hits of foreign cinema, but that's been going on for a long time, and has not grown as a phenomenon. On the other hand, 40 years ago nobody held contests over who was a bigger fan of The Bionic Woman, or who could micro-analyze the social world of The Mary Tyler Moore Show, or who had boosted their status in a single day by binge-watching an entire season of The Waltons. These days, TV shows are so obsessed over and fought over, it's pathetic. But they're all made right here in America, or England.

It's not just due to the greater supply of higher-quality TV shows now vs. the '70s, because it isn't only Mad Men and the like that are obsessed over. Lifestyle strivers hold contests over utterly pedestrian crap like The Big Bang Theory, Law & Order: SVU, Orphan Black, and whatever other gay-vampire-detective junk they're running in primetime.

Perhaps the clearest comparison can be drawn between the appeal to lifestyle strivers of clothing and accessories on the one hand, and grooming items on the other. Both clothing and grooming are part of your regular routine, and there's an existing interest in seeing what other people look like. And they're part of the same lifestyle domain -- your daily presentation to other people.

However, most clothing, shoes, hats, etc. are made in third-world sweatshops, whereas most grooming items are made right here in America. Even the $2 shampoo from a big box store says "Made in USA," whereas even a higher-end clothing item like a merino wool sweater from Banana Republic says "Made in China".

So which one do the lifestyle strivers do the most battle over? Just go to any retail store, and notice how much grooming stuff there is. Aisles and endless aisles of striver-oriented grooming products.

Clothing is subject to fashion cycles, but lifestyle strivers don't seem to make use of it in their battles over who is cooler than who else. Competing over clothing is more of a niche thing, and even then it's over clothing made in the first world. Competing over grooming products couldn't be more widespread, when any given supermarket offers men dozens of hairstyling materials, deodorant scents, and vitamin-supplemented moisturizers.

On YouTube, the most popular female lifestyle strivers are part of the contests over hair products, makeup, and the like -- not so much clothing, shoes, or bags. Ditto for male strivers -- they're not as obsessed over either one or the other, but they're still more likely to obsess over hair products, beard oils, shaving cream, cologne, and so on, rather than apparel.

The one possible exception is technology products that are made in the third world, but that play a key role in lifestyle status contests -- iPhone / MacBook, Skullcandy headphones, Nintendo DS, etc. Toting these devices around and showing them off to others is part of their regular routine, and there's interest in who has what. Why don't people mind that they're all Chinese crud?

But that misses the difference between the device and the media that it's used to access. Strivers obsess over TV shows -- all of which are made in America -- but not really over the television sets themselves. Whatever will do, will do, as long as they stream the shows that the strivers have to stay on top of in order to be part of the coolness competition.

So, even in the world of lifestyle competition, where the point is to move away from competing over career, wealth, and materialism, there is still a vexing concern about how high-quality the materials and labor process were that went into making the stuff needed to carry out their lifestyle contests.

This gives insight into why folks back East are more in favor of Trump's campaign to "Make America Great Again" by bringing back manufacturing to the US (darker colors mean greater support for Trump): 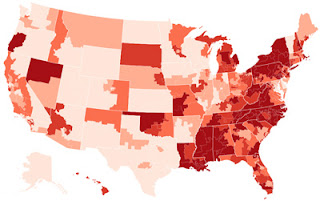 People are more career-striving back East, and are more concerned with the quality of material possessions -- TVs, cars, clothing, furniture, and so on. What is made now is crap, and hardly worth bragging about in a status contest. Imagine trying to preen over some crappy IKEA coffee table made out of Chinese frankenlumber (albeit "assembled in America" -- by you).

Out West, the focus is more on lifestyle contests, and the raw materials and labor that go into the relevant products are already made here in America. They're not really what we think of as possessions, though, but more like the material or immaterial stuff that greases our daily lifestyle routines. They don't see what the big deal is, when it's American or first-world materials and labor that produce their pumpkin spice granola, craft beer, tea tree oil shampoo, TV shows, movies, smartphone apps, and even video games.

To the out-West mind, it's "Why so gloom and doom about the state of the economy?" Hence the focus instead on social and cultural values rather than matters of the economy and government, whether that's in the blue-state or red-state flavor of out-West values orientation.

All you beard-oiling, Walking Dead binge-watchers out West of the Mississippi should be throwing your support to Trump rather than the regional favorite Cruz, or just stay out of the way altogether. You can continue jerking yourselves off about who's the bigger craft beer aficionado, while the materialists back East are busy bringing back quality-made stuff to our country, and in the process restoring dignity, prosperity, and freedom to the working and middle classes who will be powering those formerly long-gone sectors of the economy.