News for Cruz: Culture war doesn't play back East, even with evangelicals

One of the most refreshing outcomes of the South Carolina exit polls was that Trump won handily over Cruz with evangelicals, reversing his loss among that group to Cruz in Iowa (really the only group there that he didn't win with).

A hilariously poorly researched article at -- where else? -- National Review attributes Trump's success with Southern evangelicals to their lower rates of church attendance, while Cruz does better with the supposedly more frequent attenders in the Plains states.

Data from the General Social Survey show what everyone already knows, that the Southeast is the Bible Belt, and the Plains less so.* Even casual browsing of the Wikipedia entry on religion in America provides not only a map but also a table of values showing that the Southeast is indeed the Bible Belt, with the Plains states coming in a distinct second place. Here's the map of attendance: 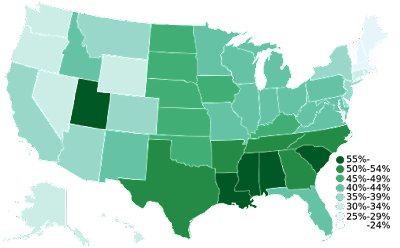 Here is a map of "adherents," meaning those who are simply affiliated with a church, regardless of how frequently they attend services:

Now it is the Plains states that are in the lead -- but not for attendance. In the Religious Congregations & Membership Study, "adherents" include children, and fertility rates are higher in the Plains states, so it's possible that their higher level of "adherents" is simply due to larger family sizes there compared to the crowded Southeast.

The bogus narrative about Trump only winning among fair-weather evangelicals was meant by the lazy NR blog poster to suggest that Trump's religious supporters, like Trump himself, are weak Christians at best. They may identify with a church, but do not attend often.

No shock that NR is dead wrong yet again about Trump's supporters. You don't find more frequent church-attenders than in the Southeast. If anything, it's the evangelicals in the Plains who are more into Christianity theoretically than in the butts-in-pews manner -- part of the general airy-fairy mentality out west of the Mississippi River.

The thumping that Trump gave Cruz in a state seemingly tailored to his evangelical appeal reveals a divide within evangelicals that we see within the general population, religious or not. Folks back East are more pragmatic, emphasize common sense (along with religion, in the South), feel more secure in their environments, and generally have their social and emotional needs met. Southerners are famously cheerful.

This makes them less susceptible to the razzle-dazzle charms and incantations of a snake oil salesman from out West, where folks are more idealistic, prize the counter-intuitive over common sense, feel insecure in their environments, where they're prepping for the apocalypse, and are more loners and paranoids who are socially and emotionally starved (and not stereotyped as always full of good cheer). That group is ripe for being spellbound by a cult guru like Cruz.

For evangelicals back East, church life is part of overall social life. They don't try to make such a big show about it any more than they do about their family lives, however intensely they may be involved in both. Because they see their family and community lives enduring healthily into the future, they see their church life doing so as well. It's not very apocalyptic, where the ways of the world are on the verge of being turned upside-down.

Evangelicals out West, on the other hand, could not act more holier-than-thou, self-righteous, and vainglorious. It's not so much a part of their social lives (which are not as rich as they are in the Deep South), as it is part of their personal or household-level preparation for the apocalypse. The federal gubmint is out to get you, Satan or the Anti-Christ is out to get you, somebody or other is just around the corner, ready to unleash all Hell upon Earth. Time to prepare for basic survival and the final moral judgment, lest you perish in the imminent chaos.

This also relates to the difference between status contests based on career striving vs. lifestyle striving, where folks out West make a bigger contest out of their lifestyles, while those back East focus more on their careers. Going to church, and carrying out various other religious practices, falls under lifestyle. And just as athletic people in the Southeast don't preen about some overly complicated fitness routine, the evangelicals are less likely than they are out West to treat religion as a battleground for one-upping their rivals in the status contest.

Cruz and his cult are in for a rude awakening when they cross the Mississippi, if they think their apocalyptic freak-out happenings are going to play with the local audiences, just because the preacher has a slight drawl. Texas is not part of the South, any more than Minnesota is part of the Northeast. Southerners are too polite and hospitable to break the Texans' hearts directly, but they're not going to extend their sympathy when it comes to the voting booth, where they're sending the Cruz cult a loud and clear signal to don't let the door hitcha where the good Lord splitcha.

* The GSS uses Census regions, where "South Atlantic" includes Maryland down through Florida, so to estimate Georgia and South Carolina we simply bump the numbers up a bit since Maryland and Florida are less frequent attenders. And "East South Central" is Deep South already -- Kentucky, Tennessee, Alabama, and Mississippi. The Plains states fall under West North Central and West South Central.