The initial hysteria about replacing Scalia on the Supreme Court seems to have already subsided. Still, let's remember who really enforces policy -- not the courts but the executive branch. One of the major cases lined up for the highest court in the land has to do with Obama's executive orders for the Border Patrol to more or less stand down and let the whole third world flood over our borders.

First, notice where the weakness is coming from -- the executive branch, whose chief officer is not only refusing to enforce our borders, but is actively ordering them to step aside. It's not as though we had a resolute executive and legislative branch struggling to defend our borders against invaders, but that dang unelected court just insists on usurping Presidential and Congressional authority. Already we see how irrelevant the judiciary has been in getting us to where we are.

More than that, though, is how things will change back toward strong borders -- a determined President Trump will send out teams of men with guns to round up whoever has to go, and will escort them over the border. Other men with guns will be stationed along the border to make sure no one comes back in. Along with the soaring Trump Wall that will also be built through executive action, not through judicial opinion.

In the earlier post on the impotence / irrelevance of the judiciary's opinions, we learned about Governors of several Southern states sending in their state militia (National Guard) in order to block the desegregation of their public schools, which the Supreme Court had already found to be unconstitutional in 1954. We saw pictures of how that was countered -- by the President sending in the Army. There were no protracted court battles: the federal men with guns had more power than the state-level men with guns, so the federal level got its way, and desegregation went through in the South.

In that vein, here are some pictures of the deportation of Mexican immigrants during the 1950s. These immigrants were not responding to a judicial decision, but to men with guns who rounded them up, put them on trains, and pointed guns on them if they tried to flee or sneak back across the border. This was part of Operation Wetback, which was ordered by the head of the INS and carried out by armed officers of the Border Patrol. Both the INS and Border Patrol belonged to a federal executive department (Justice) -- no role for the legislature or the courts. 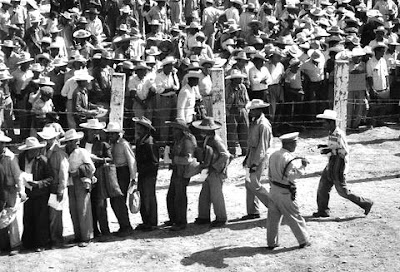 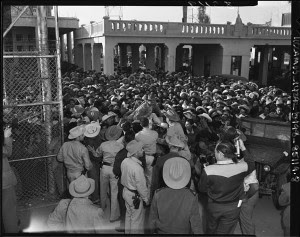 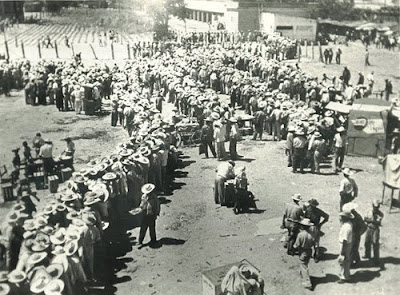 This gives us hope even in the worst-case scenario for the Supreme Court's decision about immigration. Just suppose that Obama nominates a hardcore open-borders Justice, who is then confirmed by the Senate, and the new Court delivers an open-borders opinion. We will still win against them if we elect Trump as President. He will control the men with guns who actually enforce the borders -- both at the border, and rounding up illegals already within our borders. Let the Justices opine all they want: when it comes to enforcing the laws, it is still, as always, the President who holds ultimate authority.