The liberal mind and stereotyping — aversion or inability? The case of gaydar

While browsing through the NY Post today, my eye was caught by a pic-and-blurb about reality star / model Kendall Jenner "being caught" getting flirty with NBA player Chandler Parsons.

I immediately detected gay face — over-smiling mouth and dead eyes — and concluded that she was serving as his beard. Not unlike the failed case of Taylor Swift and NFL quarterback Aaron Rodgers. A quick check on Google Images confirmed that Parsons shows gay face in all his pictures, and sports one form or another of the whooshy, hi-top fade / faux hawk hairdo that is found only among homosexuals in 2014. 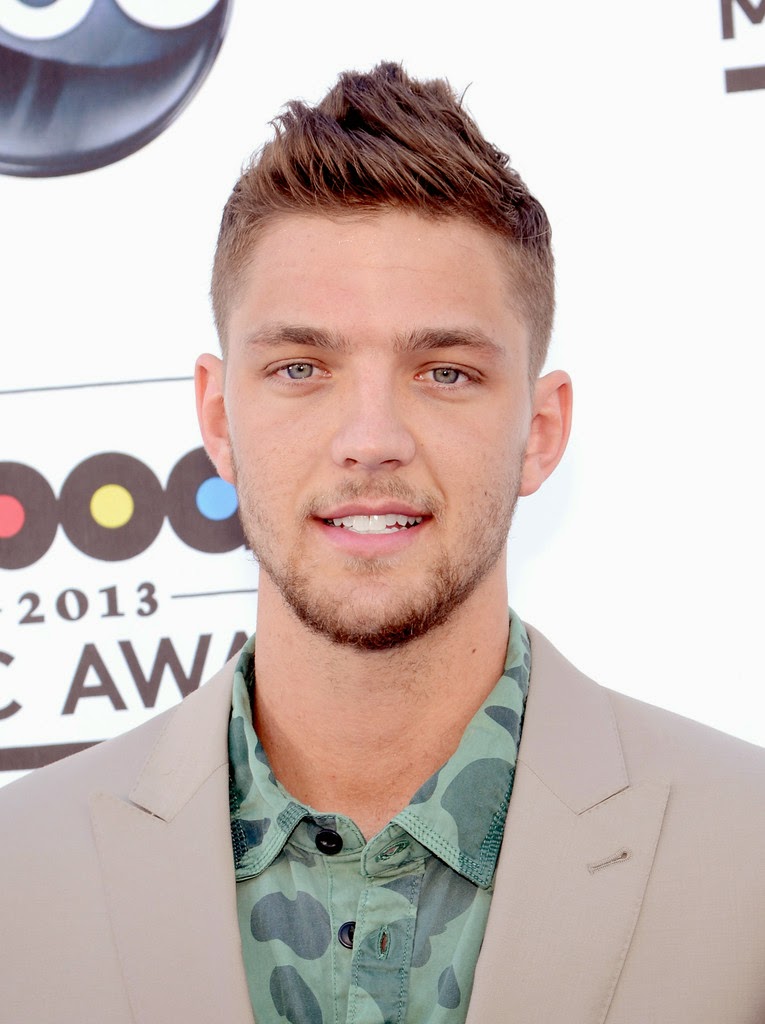 Does it make any sense to say that Parsons is "in the closet"? If we mean that he is trying his best to keep all those gay-betraying signals from getting out, then no: from his facial expressions and hairdo, he's pretty openly gay. A closeted homo would be working with a trainer to control his mannerisms and hide his give-aways. However, if we mean that he has affirmed the proposition that he would prefer to catch AIDS from a dude rather than a chick, then yes, he is still in the closet.

This distinction between corporeal signals and logical propositions highlights one of the fundamental splits in human psychology — between the senses and reason. Sensory experience supplies enough "data points" for the intuitive lobe of the brain to detect patterns or stereotypes. No experience, no intuition. Abstract propositions and rules of inference and deduction allow the reasoning lobe to construct and analyze complex arguments — which may or may not have anything to do with reality.

A good thinker has both a wealth of experience to draw on for pattern detection, as well as a dexterous way with reasoning to articulate what he believes to have discovered, and to analyze what others believe to have discovered. More often than not, though, it seems like people are better suited to one or the other. Some have good intuition but cannot articulate it for others, or criticize the claims that others have arrived at. And some have good reasoning skills but too few data points stored in memory to draw a worthy pattern out from.

Intuitive folks are more like animals, who cannot reason very well but who can sniff out a rat, while rational folks are more like electronic calculators, which do not have rich senses of their own through which to collect experience, but are superb at building up and evaluating abstract propositions.

Unfortunately for cerebral human beings, though, they don't come pre-packaged with a basic set of truths from which further complex nestings of truths may be deduced. Universal and timeless truths may become innate through natural selection — such as "two objects cannot occupy the same space at the same time" — but anything more interesting than that must be learned through the senses.

How does this psychological split relate to political differences? Recall this earlier post that reviewed some literature and presented more discussion on the finding that liberal brains are more emotionally blunted, while conservative brains are less powerful at reasoning.

They don't directly test the idea of liberals being less in-touch-with the world of the senses around them, but that's not a giant inferential leap to make. Emotions give our experiences an intensity that ensures they get stored in memory, and they color-code our experiences so that there's a rich variation to draw patterns out of. Without variation, there are no correlations. Yet without the high-octane proposition-nesting algorithms that formulate our thoughts and analyze the thoughts of others, much of this intuition remains tacit. (Thought not necessarily private — people may share intuitions if they've had similar experiences and have similar pattern-detection skills.)

This leads us to ask whether liberals, who fall into an apoplectic fit when someone points out a stereotype that they don't like, are bristling at the stereotype whose kernel of truth they recognize but do not want to accept, or are instead perplexed at what esoteric chain of reasoning led to such a conclusion?

The former view rests on ideas about cognitive dissonance (alleviating or preventing it), and selective attention — don't notice data which would cohere into a pattern that would threaten your ideology. The latter view rests on the broader pattern of liberals being blind to the real-life, grassroots, face-to-face facts of the world around them — regardless of whether they would serve for or against their ideology.

Liberals want a quick argument for which they can form a quick evaluation. "Quick" may mean several days or a week to digest a book and put down their thoughts. But that's far less time and effort required than having to take in hundreds or thousands of data-points across all our years of experience.

Thus, how does the liberal mind react when presented with the claim that so-and-so is clearly gay — just look at his face and mannerisms, listen to his voice, and get a load of that hairdo. Utter astonishment. That is pure pattern-recognition, with no reasoning whatsoever. And knowledge of what gay-face looks like, what gay-voice sounds like, and how gay-hands flit about, is not included in that tiny set of innate ideas that would obviate the need for real-world experience.

The conservative could homoerotically claim that so-and-so "pinged my gaydar," whereas the liberal has a weak or non-existent gaydar to begin with. Hence, they are not arguing over whose gaydar is giving the more accurate reading. They begin at an impasse over the very style in which a debate, however brief, is going to proceed.

I wonder if the corporeal vs. cerebral difference is a better explanation for Jonathan Haidt's finding that conservatives understand liberal morality better than liberals understand conservative morality (and are unaware that they're clueless). His work shows that conservatives draw on five distinct moral frameworks, while liberals draw mostly on two of them. Conservative morality is a superset of liberal morality, and it is easier to dial down some switches that are already well built, than it is to build good switches when they have been absent for your entire life.

Cases like gaydar are the crucial pieces here. We could appeal to cognitive dissonance, etc., for why liberals would not want to notice how typical Mexicans behave, or how typical liberals think. But what about where it would score points for their own team? That is ideological ammunition left behind in the arsenal during a time of intense warfare — hence unseen.

Nothing hurts more, or is more damning, than the truth. So why do liberals make up "the typical conservative" out of whole cloth? Why not skewer them for what they are truly like? And why ignore the multitude of obvious homosexuals in contemporary popular culture, when these could be claimed to boost the coolness level of liberals? "See, even a star NFL quarterback is gay! See, even our era's Cary Grant — George Clooney — is gay!"

They certainly show a desire to claim all sorts of other historical stars as queer, though usually on wrongheaded and tone-deaf grounds. Their detection skills are so weak that they must rely primarily on evidence relating to the figure's sexual behavior, when so-and-so (say, Michelangelo) could just have easily been asocial, asexual, autistic / spergy, chaste, celibate, and so on. Not being a poon hound is a poor distinction between faggots and normal men. They never bother looking into accounts of Michelangelo's mannerisms, voice, facial expressions, etc., to see if he fit the profile of the typical queer. ("Profiling — does not compute.")

These separate lines of evidence point to the liberal mind — whether it votes Democrat or Republican — being unable rather than averse to forming stereotypes.

More importantly, it underscores the difficulty of debate and consensus between liberals and conservatives, as they have such trouble playing in the same ball park by the same set of rules. Conservatives favor pattern recognition, tacit values, and implicit understandings about what should be done. Liberals favor abstract reasoning, articulated values, and explicit conclusions about what should be done.

If we are to keep our country from blowing itself up — or at least, if we are to heal the wound once it is inevitably cut open — then we need to send representatives from each side who are the closest to speaking a common language and set of assumptions. That means conservatives (not Republican voters) who can score well on a test of verbal reasoning and reading comprehension, and liberals who can muster their sense of disgust while realtalking about the world around them.

That's what worked the last time there was a long period of status-striving and inequality that nearly blew up society, around the turn of the 20th century. It was the combined forces of the Progressive movement and the Temperance movement that finally leveled Gilded Age inequality and exploitation, and drained the swamp of fin-de-siecle decadence.

* When conservatives do deliver a memorable speech, it's more in the form of pointing out patterns in the physical world, and leaving the values and conclusions implicit. Note how free of abstractions or statements of values the following description is, even when they would fit in (like "welfare queen" instead of "20-year-old mom with four kids"). Here's pro baseball player John Rocker on what's wrong with New York City:

It's the most hectic, nerve-racking city. Imagine having to take the 7 Train to the ballpark looking like you're riding through Beirut next to some kid with purple hair, next to some queer with AIDS, right next to some dude who just got out of jail for the fourth time, right next to some 20-year-old mom with four kids. It's depressing... The biggest thing I don't like about New York are the foreigners. You can walk an entire block in Times Square and not hear anybody speaking English. Asians and Koreans and Vietnamese and Indians and Russians and Spanish people and everything up there. How the hell did they get in this country?