The all-female band died from '90s feminism and cocooning

You are probably starting to hear louder and more desperate attempts to make that whole '90s revival happen, but it ain't happenin'. Way too lame of a decade.

One of the major exhibits that's always brought out to establish the politically correct bona fides of the Nineties is the so-called surge of the girl bands, such as L7 and Luscious Jackson, and mostly-girl bands like Elastica and Hole.

This was an obviously bogus argument at the time, and has only gotten more shameful 20 years later. The peak of female bands was back in the good old 1980s, while during the '90s the format was in fact in steep decline, and is non-existent today. (Data and analysis to follow below.)

How can that be, when the Eighties were more macho and gung-ho than the Nineties, which -- so the feminist theory goes -- should have scared off or crowded out women more so than during the decade of meek and mopey? Dial down the testosterone level, and women will feel more comfortable stepping forward and taking part, right? Wrong.

Women produce testosterone, too, and it makes them feel confident, too. When T-levels fell off a cliff during the wussification of the '90s, they were still high enough for guys to continue working in teams to make music -- just not nearly as well as in the '80s, when the rising-crime climate had average people in a higher state of arousal. But since women start with much lower levels -- even when they're relatively high -- a decent drop will leave just about all of them below the threshold necessary to play in a real band. (Unserious and unknown bands that exist only to indulge the feminist vanity of the performers, do not count.)

Along with confidence, you need trust to hold a band together. Folks in outgoing times are more trusting -- otherwise they would isolate themselves like they do in cocooning times. Social groups among women are harder to hold together than a guys-only group, not because there's no drama or fighting among men, but because we trust that we can make amends and move on, while women are more likely to perceive drama as "dealbreaker" events, burn their bridges, and cut their losses. So, when trust levels fell during the '90s, it left far many more women below the threshold for holding together a group of genetically unrelated people.

This is the greatest and least remarked-on irony of the past 20-some years -- that the feminization of society has made it nearly impossible for women to accomplish something impressive in popular culture.

Now onto a look at the cold hard facts, which you aren't going to read about in some puff piece about how the '90s were da bomb (...NOT!).

I'm ignoring girl groups and sticking with bands because playing instruments requires more skill than just singing. I'm also sticking with female-only bands to make the interpretation unambiguous; if I included mostly-female or female-fronted bands, you wouldn't know what the relative mix was over time. Wikipedia has a category page for all-female bands, most of which are wishful thinking and vainglory for the feminazi editors, but which do contain many legit examples.

As for pop culture visibility and resonating with the average person, I'm judging by the Billboard and UK charts. The band had to have at least one hit in the top 40 or 50. What particular chart didn't matter too much, but not an obscure one. Top 40, Mainstream Rock, Modern / Alternative Rock, Country, etc. I looked up the chart success on the discography entry for the band, or if there was none, from scanning through their main page.

Here are the all-female bands who enjoyed some level of chart success (as defined), by the decade that their singles were released in. Bands are listed only once, no matter how many hits they had.

Let's set the bar a little higher. A clueless person might think that those groups from the '80s were just a series of tokens, while the real chart-toppers blew up in the '90s. Here are those that scored a top 20 hit on the main chart (not a genre chart) of either the US or UK. And now let's list them by songs to show just how enduring the success of the earlier groups used to be, spanning three or four calendar years. Each line has the year, band name, song name, and highest chart rank (US if blank, UK if specified). Again they are separated by decade to make the pattern jump out.

Now things are looking even worse for the supposedly women-empowering Nineties. That decade had merely 3 big hits, and all are British-only hits. It's just as sparse in the 2000s, and so far there's only 1 hit in the 2010s. Just 1 hit remains from the '70s. And then there's the reliable Eighties to give us 18 positive role models for songs performed by women-only bands. You can also see a peak more in the later part of the '80s, when cocooning had reached its minimum (and so, just before the whole society would change direction circa 1990).

Let's raise the bar higher still, and make the dominance of the '80s unambiguous. Below is every song by an all-female band that was a top 10 hit in the US. (Not coincidentally, the bands are all from the L.A. area, back when California was more conservative, and not from the liberal bastions of the Upper Midwest and the East Coast.)

Have you heard of the Bechdel test? It's an attempt to measure women's independence from men in movies. A pretty bad attempt, but I think it would work better in a short medium like pop songs.

We already have groups of women who have a recognizable name and perform together. Of the elite songs listed just above, which ones are not primarily about boy-girl relationships? "We Got the Beat," "Manic Monday," "Walk Like an Egyptian," and "Hazy Shade of Winter." One of these four was also written by the band themselves -- "We Got the Beat." The Bangles did co-write most of their hits, but these three were by outside songwriters.

Funny -- it's almost as though not beating women over the head with feminist guilt allows them to live and behave like natural human beings, and to write and perform songs that are about topics other than boys. Once there is such a self-conscious feminist cocooning impulse, then the focus shifts to boys only -- sometimes as part of the usual boy-girl song, sometimes as part of the new self-aware "Independent Woman" song. But you aren't going to hear something that's not self-consciously not-about-boys, like "Manic Monday," that anyone can relate to.

It may sound obvious after discovering it, but let's repeat that point: outgoing people's music is easy for the audience to relate to, while cocooners' music is bland, distancing, and harder to relate to -- and in both cases, by design.

And yet, as socially and emotionally avoidant as the climate may have become by now, women, being naturally more fearful, have withdrawn much farther into their cocoons than men have. And that makes all the difference in playing a role where you're meant to break through and connect with a broad audience.

As any strip club performance will show, there need be no emotional connection with the audience for a woman to parade herself around and soak up free attention. That's about all that is left in a women's culture that is so profoundly afraid of men. Female bands have vanished, and in their place are the quasi-strippers and pseudo-sluts that make up "girl groups" and "strong independent singers" nowadays.

We've heard a lot from lefty circles about how the mass media disseminates frightening images and messages in order to create a "culture of fear," the better to paralyze the populace and sap away their "agency." Well, what do they have to say about the widespread hysteria stoked by feminists about how all men are crypto-date-rapists, and hence you can only be safe by keeping apart from them? That has paralyzed women into holing up inside their domestic prisons all day long, on the one hand, and removed the "agency" of the counter-minority whose imaginary empowerment comes from strutting their stuff to get a rise out of men.

Hardly the outcome that the feminazi propagandists envisioned, is it? That's what happens when you get arrogant and fuck around with something that's already working well. Women were already competent and confident back in the '80s -- how exactly was becoming frightened of everyone, everything, and every place going to improve on that? But then you can't expect hysterical ideologues to really be thinking any of this through, down the line.

Now let's end on a more pleasant reminder of the good old days. 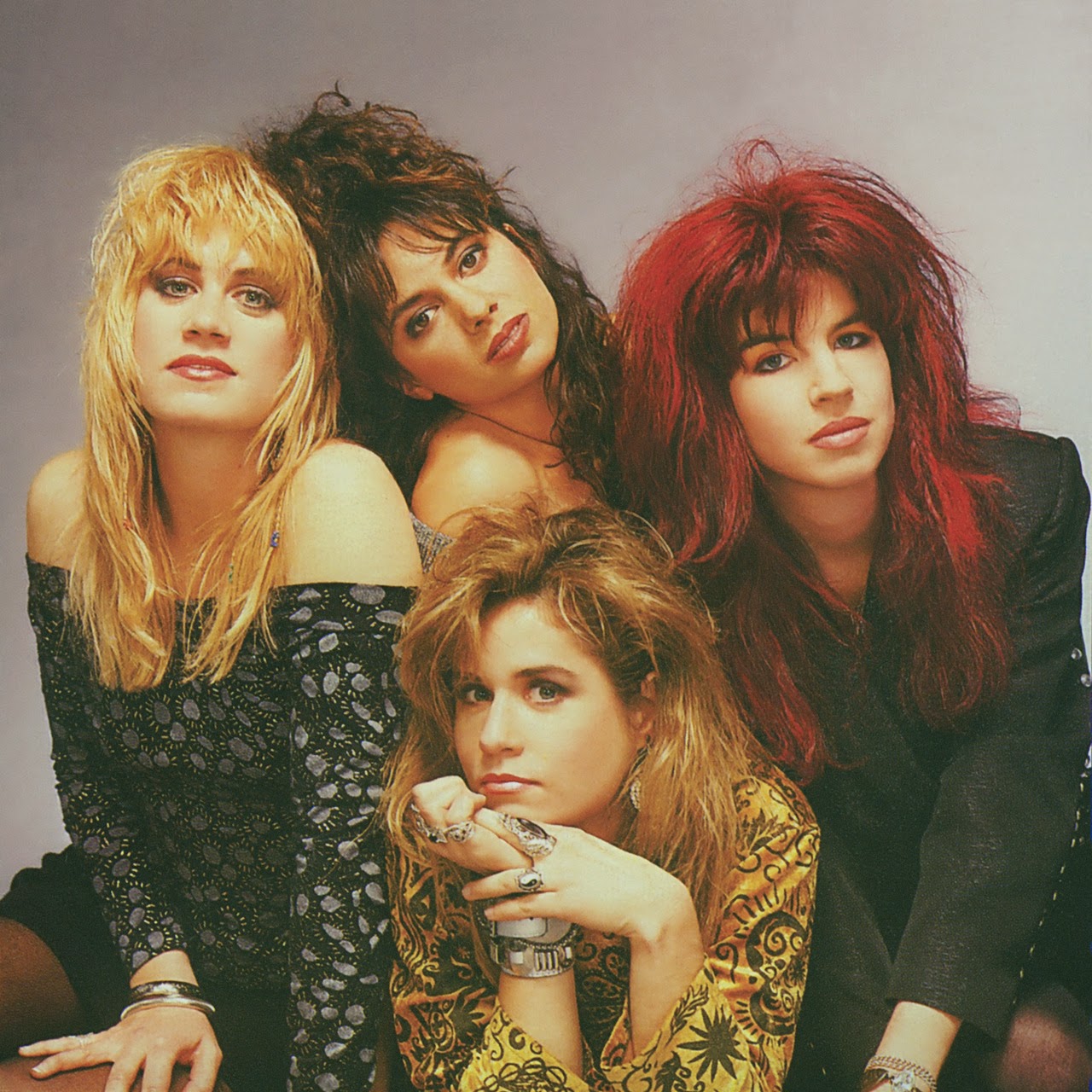