Not Earth to Echo: Characters who looked and sounded creepy, but proved themselves as trustworthy friends in '80s kid culture

Coming out this week is another one of those nauseatingly cutesy, inoffensive, painless, and unchallenging kids' movies, Earth to Echo (trailer here). By all accounts, the plot is a shameless rip-off of E.T. In one major respect, however, they deliberately took the opposite approach from the original -- in designing the alien creature to look like a cute baby owl who purrs like a guinea pig.

I guess an ugly-ass naked midget with a slow raspy voice would be too much for today's generation of wimpy kids. 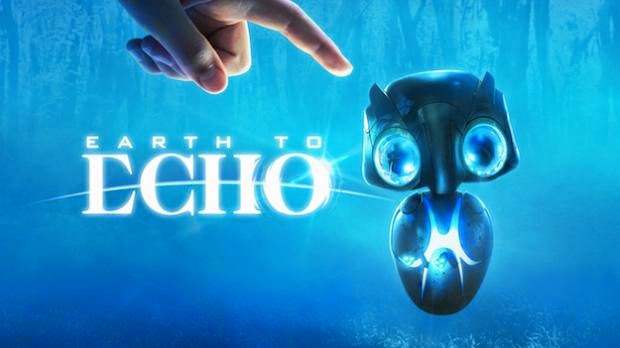 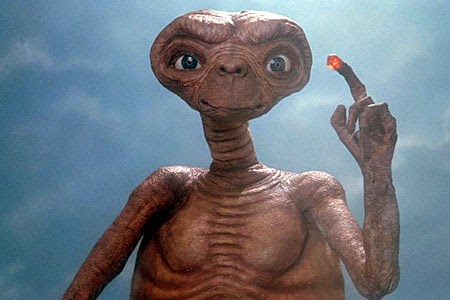 Although it may seem like a trivial difference, making the alien so cutesy completely undercuts the intended themes of bridging a trust gap between wary strangers, tolerance of that which we initially fear if it proves itself friendly, and judging others by their character and conduct rather than their outward appearance. The cute little robo-owl looks harmless, and acts harmless -- wow, what a challenging lesson to learn!

Children haven't been exposed to characters like E.T. for so long that it's worth taking a look at how common that type used to be back in the '80s. They all frightened us at first, with their ugly appearance and weird voice, but by asking for our help and then returning the favor, they proved that they were to be trusted as friends, not turned away as enemies. 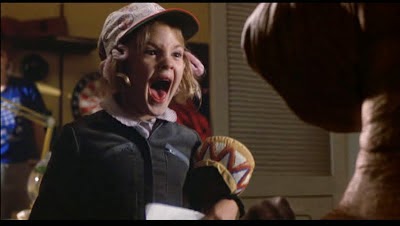 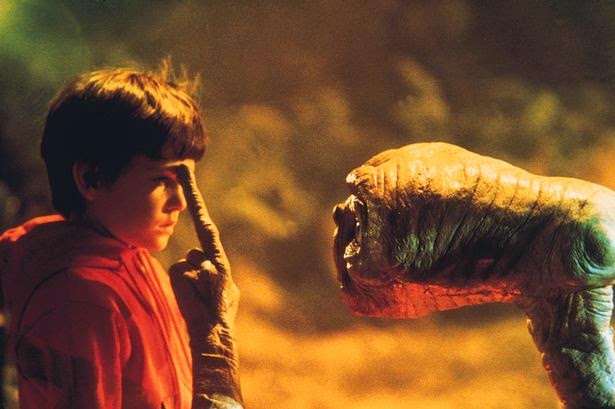 Lame rip-offs of E.T. are nothing new. But back in 1988, Mac and Me still featured an ugly-looking alien because that was such an important part of the whole "strangers growing to trust each other" thing. 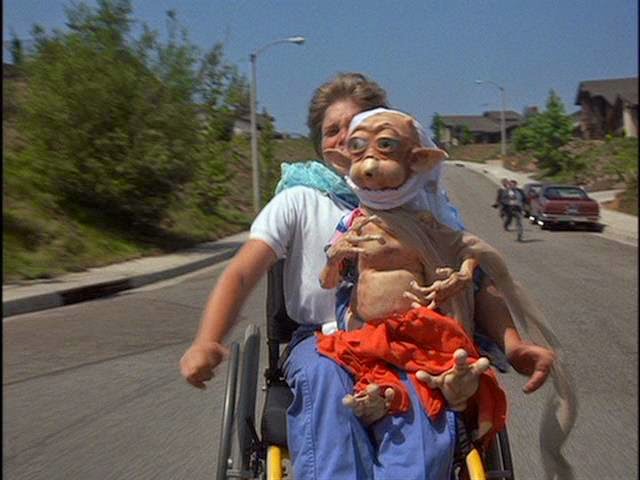 Even when the tone was purely comedic, not dramatic, the alien was still ugly. In the TV show ALF (1986-'90), the alien is a wisecracker who creates and "odd couple" dynamic with the serious and cautious head of the household, Willie, who nevertheless does his best to keep others from finding out about his family's new alien companion. ALF was also made into a popular stuffed animal for kids. 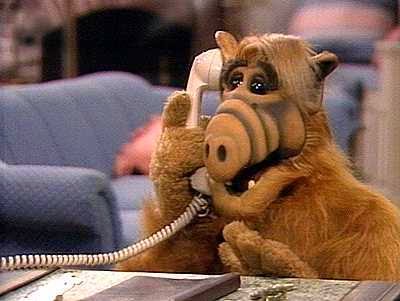 Speaking of hideous-looking, potentially frightening stuffed animal friends, 1986 saw the release of My Pet Monster, which was like the My Buddy doll, only ugly and scary. Its bulbous green schnoz was covered in warts, its eyebrows pointed downward, and its yellowy fangs hung out in plain sight (although it looked more like an overbite than an aggressive display). But it still looked friendly enough to be your partner-in-crime when you were playing make-believe. 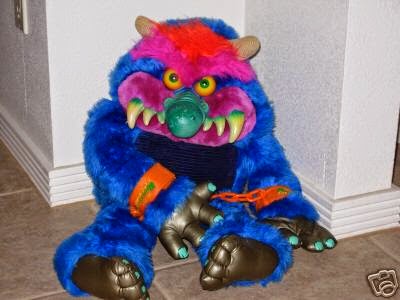 In Labyrinth (1986), Ludo the gentle beast has an ugly mug, and Hoggle the cynic looks downright repulsive. After an initial scare, both of them help the protagonist Sarah navigate the dangers of the labyrinth to rescue her kidnapped baby brother from the Goblin King, whose glamorous evil contrasts with the ugly yet kind-hearted pair of helpers. 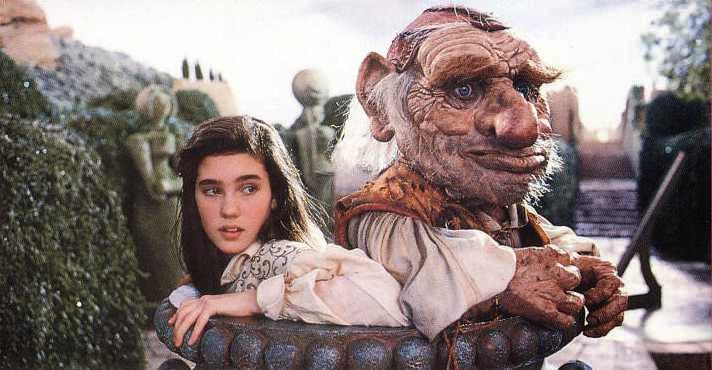 Just about all of the friends that Atreyu makes along his adventure in The NeverEnding Story (1984) look weird, ugly, or creepy. In fact Morla, the giant old tortoise, looks almost like E.T. in the face. But by far the most disturbing is Falkor the luck dragon, whose likable doggie face does not seem to match with his pedo grooming voice, or the reptilian scales that cover his back. (As a kid I thought those were large blisters -- no joke, it made my skin crawl when I first saw it.) But he helps the kid along his journey, rather than take advantage of him, so our initial revulsion was misplaced. 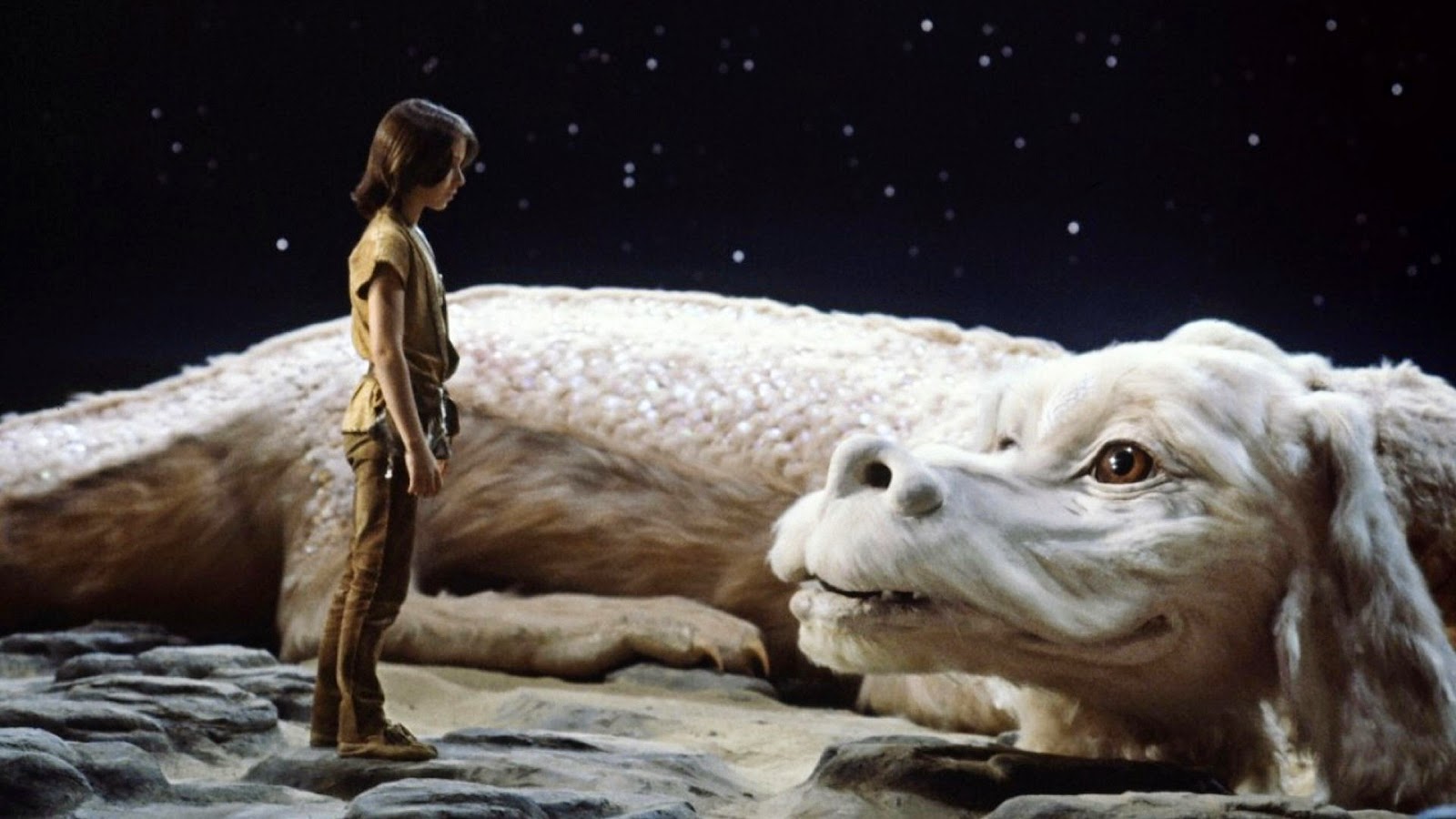 Then there was that creepy, personal space-invading robotic fish eye lens, voiced by Pee Wee Herman himself, who commanded the spaceship that the young protagonist flew in Flight of the Navigator (1986). 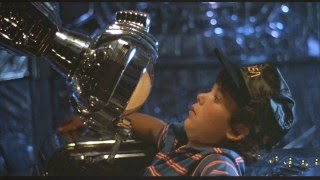 Gizmo from Gremlins (1984) has a soft voice and a generally cutesy look, but his naked wing-like ears look a little off-putting when seen against his overall primate appearance. If they really wanted to take it easy on the kids, they wouldn't have included those freaky-looking ears. 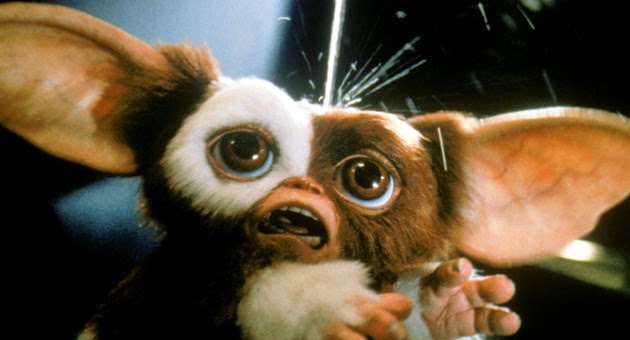 Also in the vein of freaky primates was the sasquatch Harry who befriends a middle-class family  in Harry and the Hendersons (1987 movie, 1991-93 TV show). Something about how close together his eyes are, and how often you see his lower row of teeth, give him a disturbing rather than cutesy primate look. 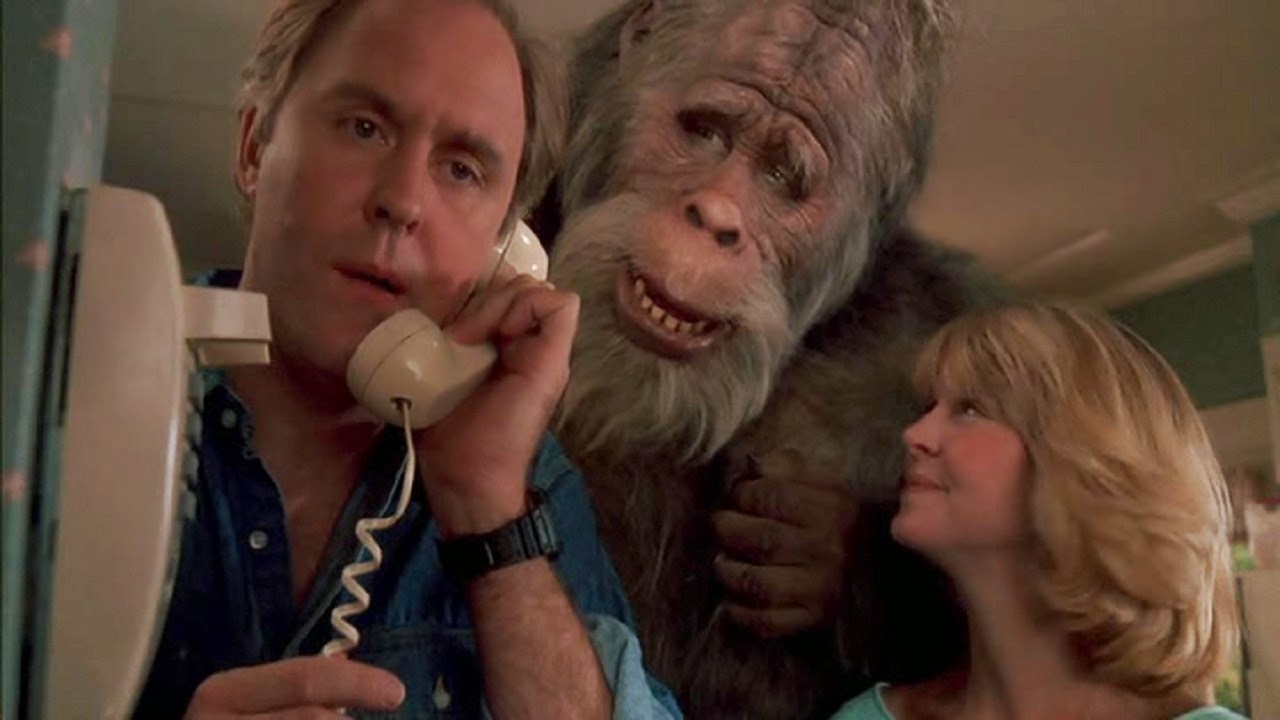 Then there's the title character of the children's picture book Gorilla (1983), who startles a little girl when he comes to life from her imagination, but then earns her trust as he whisks her away from her depressing latchkey kid existence for a night of adventure around town. 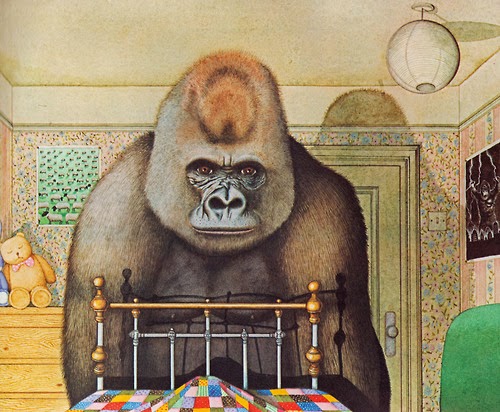 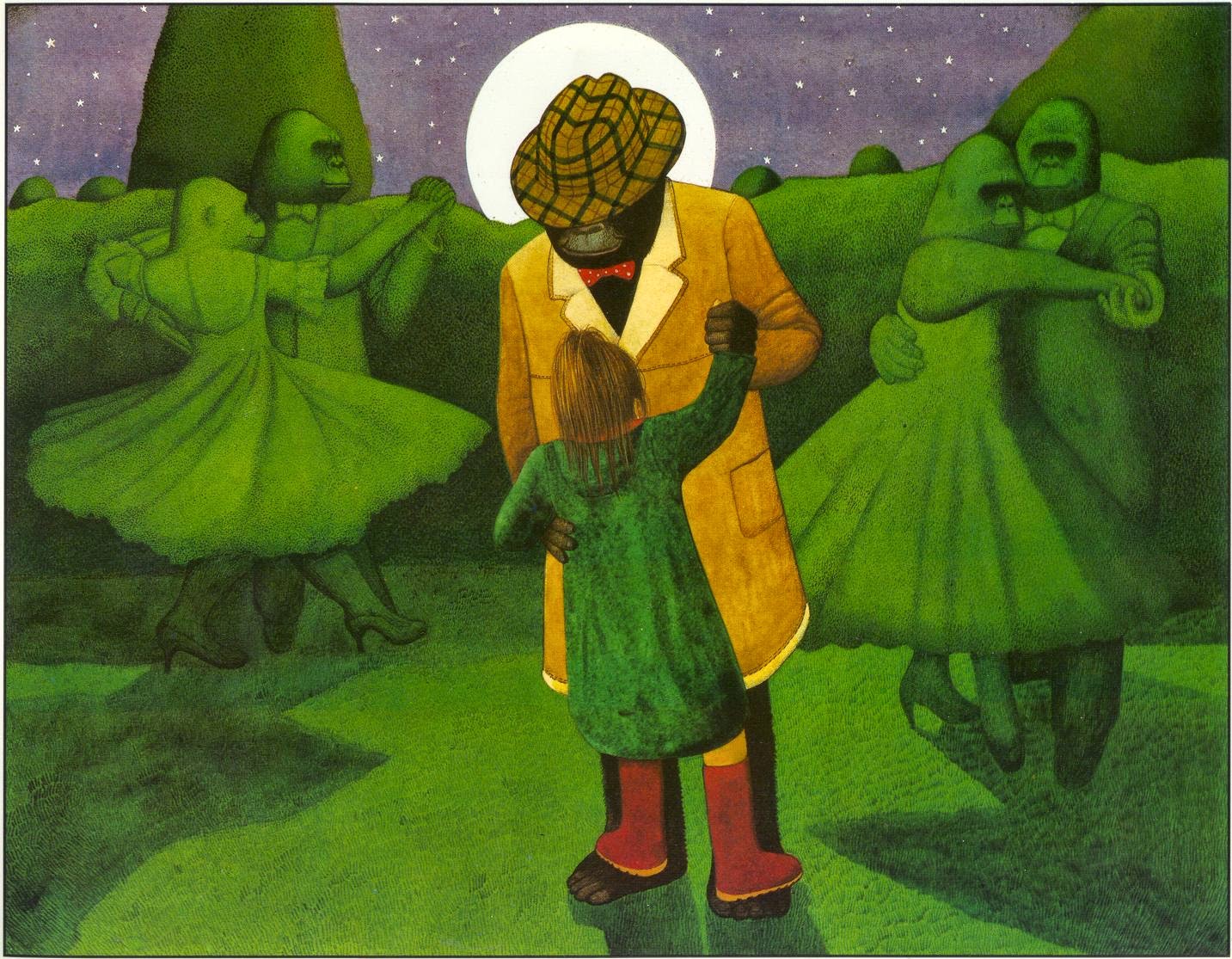 Is he human or not-quite-human? Sloth from The Goonies (1985) scares the hell out of all children when his twisted face and horrible scream are first revealed. Yet this lovable abomination of nature proves himself ever faithful and sacrificing when the shit is about to hit the fan for the adventurous kids who stumble upon him chained up in a dark cellar.

By the early '90s, the alien/monster gave way to more familiar creatures who were still creepy-looking yet benevolent. In Home Alone (1990), there's a sinister-seeming old man who turns out to only be upset from being estranged from his son. He and the pint-sized protagonist Kevin have a heart-to-heart understanding in church, and the old man later clobbers the pair of robbers who have Kevin cornered in his own house.

Finally, in The Sandlot (1993), a band of baseball-playing kids discover that the neighborhood dog with Cujo's reputation is in fact a gentle giant, and that his blind owner is not as creepy as they'd thought either. The avuncular owner simply prefers his privacy.

That's about the last example I came across in looking things over. Since then, any aborted attempts at the character type have made it too cute on first impression, or disarmingly campy (which amounts to the same thing). The Nickelodeon show Aaahh!!! Real Monsters, Quasimodo in Disney's take on The Hunchback of Notre Dame, Pixar's cute-ification of Shrek (who looks grotesque in the original picture book from 1990), Monsters, Inc., How to Train Your Dragon, and so on and so forth.

Helicopter parents devote their entire effort toward insulating their child's body and brain with bubble wrap. No hard falls, no hard lessons. Anything awkward must be smoothed over, anything yucky must be sterilized. If this warps your kid's development and stunts them permanently, don't worry -- at least you won't personally feel uncomfortable having to watch them grope toward maturity.

With such a seismic change in the goals of parents, it can come as no surprise to see the repulsive yet trustworthy character from the '80s replaced by the cutesy and harmless ones over the past 20 years.