I haven't seen the movie yet and probably will not, mostly on the basis of the dull-looking visual approach that's evident in the trailers -- monochromatic, desaturated, uniform lighting, deep focus (information overload focus), jarring action tempos that you can't get into the groove of, and so on. "Bombastic" keeps coming up in reviews, both about the look and story.

I had hopes for this one looking cool, given Christopher Nolan's influence as producer. But his cinematographer Wally Pfister is absent, and pinch-hitting for him is Amir Mokri, known for such sublime-looking films as The Joy Luck Club, Coyote Ugly, Bad Boys II, Fast & Furious, and Transformers: Dark of the Moon. And with the director of the hit video game 300 at the helm, a nerdy in-your-face overload look must have been inevitable.

Again, I haven't seen it yet, and you don't want to make too much out of a single frame, but it represents a larger problem with the movie's visual style. Now, we don't know exactly what's going on plot-wise in the image below, but it's clear that the butt-kicking babe type on the right is physically threatening Lois Lane on the left, with Lois' partner Superman looking on anxiously from further back.

Superman is the protagonist, the character we're supposed to identify with the most. We are meant to feel how tense he must be right now, not knowing how far the man-woman is going to escalate things. With her larger size, dark armored clothing, and colder stare, she looks like she could just snap Lois' neck if she wanted to. How far is she going to take it?

Since all of the action is taking place between the two women in the foreground, our attention should be concentrated there, and Superman should be far less intrusive visually. He is too in-focus -- more or less as in-focus as the foreground characters -- and we can read too much detail on his face. The shadows thrown on his face don't do enough to hide the details of his expression.

Instead it needs to be blurred enough so that we can tell in what direction his head is pointing, which tells us who he's looking at, and only the vaguest hint of what expression he's making. We assume that he's feeling worried and watching carefully for the slightest sign that things are taking a turn for the worse before he jumps in to save Lois. We don't need to have that telegraphed in crisp detail from the background -- it's a natural, normal reaction to the action in the foreground. Reactions that are not noteworthy or surprising do not need to be focused on, pulling our attention away from where it should be building up.

In addition to keeping our attention where it should be, a blurry focus on Superman would also heighten our concern for him. We assume that he has that look on his face, but by obscuring the focus enough, we don't get 100% confirmation. It keeps us anxious and uncertain ourselves.

We also would not feel complete reassurance that there's a deus ex machina waiting in the wings to rescue Lois if things go horribly wrong. With his determined, ready-to-sacrifice expression so clearly in focus, we're never in doubt that Lois is safe. I mean, just look at that face -- one false move, and that chick's ass is grass. We need to see a blurry face instead, just to keep us guessing about how prepared he is to intervene. It would feel like something bad could happen, that something is at stake, and worth getting on the edge of our seat about. As it stands, it looks like Superman is Lois' spotter at the gym.

This is such a glaring mistake, and the fix so obvious, that it leaves little hope for the rest of the movie's visuals.

To see what I mean, let's revisit an image from an earlier post on The Parallax View and sublime visual style:

The placement of characters within the frame is similar enough to the Man of Steel image, with the background figures looking on and from between those in the foreground. Since most of the action is going on in the foreground, those two are in good focus. But since there's little going on in the background, those two are out of focus. We can tell that the background character on the left is watching the foreground characters, sizing them up, biding his time until he sets a trap for them. And we can tell that the man on the right is turned toward him in a show of deference, so he must be the subordinate going along with whatever his boss' plan is.

All of that hits us immediately without being able to clearly read the faces of those in the background. Indeed the blurry focus heightens the menacing atmosphere of the bar, making the boss man look more shadowy and difficult-to-read.

The background character looking on does not always have to be blurred out of focus, though. Here is a shot from The Dark Knight Rises, where the Batman suit is staring at Bruce Wayne, practically calling out to him to put it back on: 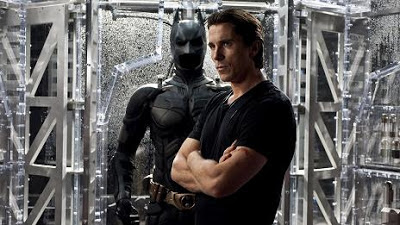 Notice how sharply in-focus the suit is. Now if it were a human face in the background, this "calling out" image would feel too on-the-nose. But since it's a mask that has had most of the fine details of human facial expression stylized out of it, we don't attend to it that much, even though it's in crisp focus. The apprehensive look on Wayne's face provides more expressive detail, so we attend more to his face than the mask.

Particularly in action movies, a genre that should be about building up and releasing tension in catharsis, we need to feel a sense of mystery, uncertainty, and menace just from looking at the setting and the people and things moving around in it. If everything is so clearly in focus, anxiety cannot build up in the first place. Thus with nothing at stake, the action scenes are like watching a child swinging his action figures into one another.

The simplest way to fix these problems is to shoot with an anamorphic lens, which brings the things being focused on into even sharper clarity, while throwing everything in front of and behind that distance into a blur. And also refraining from racking focus so often -- that is, shifting focus from one distance to another, typically to focus on one character and then another within a single shot. That works well enough when it's shifting between two people chatting inside of a car, with one closer to us than the other, and switching focus to whoever is speaking at the moment. But when a sense of uncertainty is called for, we need for the character to remain blurry throughout the shot.

Probably the best use of these focus techniques to build and release tension in an action movie is Die Hard, but that's a topic for a post of its own. Aside from more effectively giving us the right emotional response to the plot, it helps to give the movie a striking visual style that has been lacking in the kickass summer action genre of the past 20 years, and that was absent before the rise of sublime-oriented filmmaking during the '60s, '70s, and '80s.

Update: It appears that Man of Steel was shot with an anamorphic lens after all... not that you can tell from looking. It takes a special skill to deaden the shallow-focus effects of shooting in Panavision. I should have looked it up on IMDb first, but if it's used the way it's supposed to, it should leap out and not be something you have to look up to confirm.

Going back to the first image, and contrasting with the one from The Parallax View, it's not only the depth of focus that's off, but also the depth of staging. Superman is standing too close to the foreground characters, again as though he were spotting Lois Lane at the gym. It's too close for the shallow focus to work its magic. He should be placed 5 to 10 feet farther back, close enough to still be connected to the foreground action, but far enough that he'll be blurry and not acting as Lois' training wheels.

And of course all the CGI stuff is deep-focus and information overload, not real things seen through the camera lens. CGI is either incapable of mimicking shallow focus, or its creators and consumers do not resonate with that kind of look, and dig the boring crappy look instead.