Intro post here. I think I'll be going over each year in four more digestible posts per year, rather than one unmanageable one.

Let's take a look now at the issues of Seventeen from 1985. No special reason I chose this year; it was the most practical because I could easily locate images of all 12 covers. There's nothing really deep to describe about the covers themselves, so I'll breeze through the details and only emphasize important larger points. 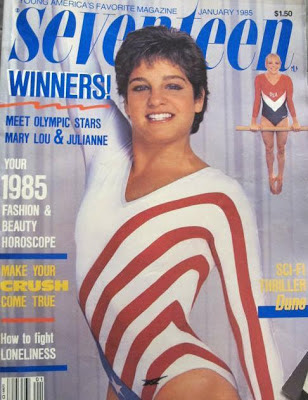 This is one of the few with a recognizable celebrity on the cover, Olympic gold medal gymnast Mary Lou Retton. The shot is from far enough back that you can see her costume / uniform, allowing you to imagine yourself as a member of the American gymnastics team yourself.

The only text about personal appearance is a block about fashion and beauty. Otherwise there's a blurb about who the celebs are, an ad for the new movie Dune (marketing a sci-fi movie to girls), and two social matters -- how to fight loneliness, and how to make your crush come true. Girls today choose loneliness by cocooning and by restricting their interactions to the cyber-world. Back then loneliness was something they wanted to fight.

And guys are not hypothetical and generic -- there's a real, particular guy you have a crush on, and here's how to achieve your goal. In more boy-crazy times, girls were not just going to wait around by the phone and hope somebody would call. 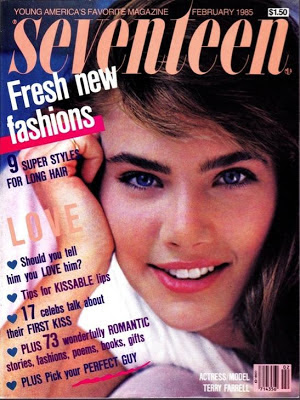 Hey baby, that's more like it. The shot is a close-up so extreme that parts of her hair are cropped out of the frame. The intimate rather than distant placement means that the reader actually wants to connect with her. And not just the male onlookers thinking, "Why, yes I am free Saturday night..." but the female readership, who's thinking "God, look at how pretty and confident she is. If I were her, I could totally work up the guts to ask out Scott on a date."

The hand is a nice little touch, too. Hands lend more expressiveness to portraits, since you can only express so much with the face itself before it looks like a caricatured kabuki mask, preventing an empathetic connection. Here her hand is soft and curled, not stiff, and it's supporting her head, which gives her a certain vulnerability -- the head needing support instead of being held straight up. And by leaning in, she gives the impression that she's ready and willing to share secrets with us. Her intense gaze underscores that -- you don't look that intently at somebody you don't trust. And get a load of those eyebrows, dude. Women looked like natural animals back then, not engineered femme-bots.

Again, that works for both guy and girl viewers. The guys can't believe that this mega-babe is about to open up intimately to them, and the girls feel like they've finally made it into the upper realm of popularity. It looks like this is a sleepover at the house of the prettiest, most popular girl in school, and she's not just tolerating your presence at her party, but is inviting you in to disclose secrets to you, hoping you'll do the same. Having cemented so close of a bond with high school royalty, your deepest social worries are over.

And the girl is a model, not a celebrity, so she would have lent an aura of mystery for male and female viewers alike. We don't know anything about her, or the roles she's played. She's also listed as an actress on the cover, but wasn't really in anything at this point, although later she would become better known, at least to nerds, as Dax on the TV show Star Trek: Deep Space Nine.

There are only two items of text about appearances, relating to fashion and hairstyles. The bulk of the text is a five-item bullet list under the large-font heading of LOVE, a word that you rarely see on this magazine's cover anymore. Yes, some of the items are celeb gossip and media promotion, but the first one couldn't be more concrete -- "Should you tell him you LOVE him?" There's some specific "him" who the reader has in mind. Today the girl would wonder who the cover text was talking about.

And "love" sure was an all-capitals word back in the '80s, wasn't it? Now you only hear girls putting that much stress on the word when they're prattling on about things rather than people. "Shut up, a jogging bra with a pocket for my iPhone?! -- LOVE!" It's amazing how autistic the supposedly empathetic sex has become.

Then there's "tips for kissable lips" -- assuming that girls were into kissing boys. Looking through older and newer issues, I've also noticed more simple yet catchy rhetorical devices like rhyme, alliteration, etc., in the ones from the '80s. 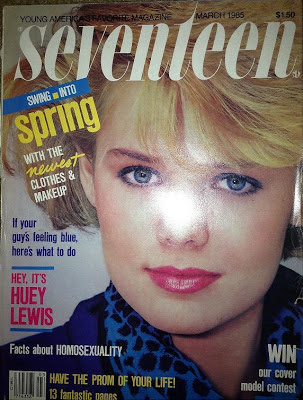 Unfortunately the best image I could find sometimes has a glare on it. At any rate, again we see a shot that's so close-up the girl's hair is partly cropped out. She's not as inviting and expressive as the chick from February, but that was more to set the atmosphere for BOY TALK at a sleepover with a girl whose looks and popularity must have given her more experience with boy world than you the reader have had yet.

Still, March looks pretty and confident, dressed and made-up like a mature woman in fact. Particularly the short hair, very career-woman-looking. You don't see maturity on Seventeen covers anymore, even when the celeb is over 25 and should know better, they still look kiddie. Here we see a teenager who looks more grown-up than today's 20-somethings (yet with no wrinkles).

Under the confidence, there's actually a very slight unease, which you might read as some kind of temporary mood caused by some troubling event in her life at this time. Although maybe teenage audiences back then would have read it as the awkwardness of changing form from child into adult. Whatever the case, she lets the reader fill in the details of the story, and because it's another model who we don't know anything about, it's not that hard.

There is a large block of text about clothes and make-up for spring, but that's it for appearances. "If your guy's feeling blue, here's what to do" -- didn't I tell you about more rhyming back then? Once more, guys are not referred to in generic hypothetical terms, like "What do guys think of you?" or "Guys tell us what they really want." There's some concrete guy in the reader's life, and their relationship is close enough that she would pick up on him feeling blue and want to support him somehow.

"Hey, it's Huey Lewis" -- LOL, what is it about that "Hey" at the beginning? It makes the ad for a celeb interview sound more friendly and informal, not like a standard hawking-your-wares kind of pitch from a pushy sales associate. "Step right up, we've got Huey Lewis here." He was nearly 35 years old at the time, and played in a somewhat traditional-sounding rock band, albeit with an '80s level of energy lifting it up. It wasn't a guy in his early 20s who did more fashionable synth-pop music. In contrast, a recent issue of Seventeen had the sexless, trendy Jonas Brothers on the cover...

"Facts about homosexuality" -- a burning social issue right there on the front cover, man. This might be an issue that I check out from my university library, just to see how PC vs. realistic the mainstream media was back then. This was way before the movie Philadelphia, before everyone came out, way before gay marriage, gay bffs, and so on. I'm sure they didn't come right out and say, "These faggots are all fucked in the head," but I'll bet they give a more accurate picture than what the fag hag media would print today.

And one final item about having the prom of your life -- it doesn't mention anything about the clothes, make-up, hair, limo, etc. When it's phrased as "Have the prom..." it sounds more like the entire social experience is being referred to. Rather than "Hot hairstyles for prom" or "Killer prom dresses."

Like I said in the intro post, don't expect sober news discussions or photography for the ages from a teen magazine. Still, isn't it striking how socially oriented girls were back then, and how little the "typical airhead bitch" vibe comes across? The girls are likable and inviting, not loathsome and off-putting. They were more focused on people and relationships, imagining personas and role-playing through empathy, not obsessing over things and stuff that would help them inflate their ego.

Things were a means to an end -- more like costumes and props that would help them ease into this mysterious, exotic other persona that they partly saw, partly imagined when looking at the cover girl. Now the cover girl only serves to model the things that the reader is obsessed with collecting and hoarding, not even really enjoying them but burning through them like a compulsive addiction.

And you know what, I'll bet their articles on homosexuality, suicide, etc., had a more sober tone than the hysterical ranting found in supposedly grown-up media outlets from the past 20 years.